At Euro 2020 it is the day of Italy-Switzerland 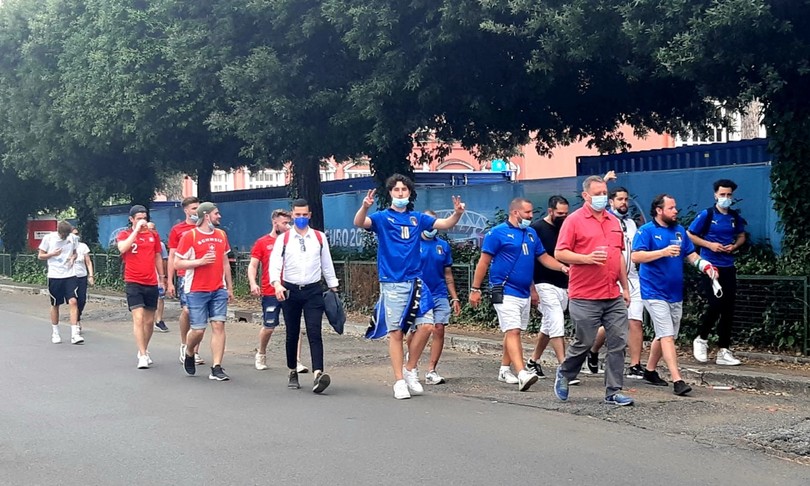 AGI – It’s the day of Italy-Switzerland at the Olympic Stadium in Rome. At 6 pm the gates opened and approximately 14,000 spectators are expected, of which more than 3,600 Swiss fans have already arrived in Rome, in compliance with anti-Covid regulations, on vaccines, tampons and patients healed for at least six months.

Italy-Switzerland will be the first match without curfew – Lazio are in the white zone – and the second match of both teams at Euro2020. There are many reasons for footballing interest. Starting with the return to Rome of the former Lazio coach, Vlado Petkovic, who perhaps touched at the Olimpico the high point of his career – and the hearts of the Biancocelesti fans – on 26 May 8 years ago with the Coppa Italia won against Roma on the same pitch where at 9 pm he will try to beat Roberto Mancini’s blues.

Then, especially noted, the midfielder Granit Xhaka who rumors of the transfer market give one step away from becoming the first player to arrive in José Mourinho’s new Rome. Then there is Shaqiri, who Mancini had as a player in his Inter, probably the best on the Swiss chessboard even if he is not in the best of his condition.

Finally there is Breel-Donald Embolo, 24 years old, 11 of which spent waiting for Swiss citizenship since he moved to the Swiss federation in 2003 with his mother from Cameroon, he scored with Wales.

Talented players who Mancini declares to hold in high regard even if, he reiterates, Italy must respect everyone but must not fear anyone. Italy’s ally is a decidedly difficult calendar for Switzerland. The Swiss national team made their debut in Baku (1-1 against Wales) and had to travel 4,400 kilometers to come to Rome, the scene of the second day of the group stage. He will then return to Baku to face Turkey. A real tour de force.

As brothers, the fans of Italy and Switzerland (some of them wearing the jersey of our national team) move along the streets surrounding the Olympic Stadium a few hours before the start of the match of Group A which could be valid for the Azzurri to qualify after just two games.

The Swiss are very colorful, even if with red dominating everything. A red that Pektovic’s national team will not wear tonight, as visiting team. Swiss in white and blue in blue (outfit: shirt, shorts and socks).

Outside the stadium, the Swiss boys move quietly in small groups, with the inevitable beer strictly in a plastic cup in hand. Every now and then some of the Swiss dare choirs, but it is the Italians who make more noise by proposing the tune ‘po-popopopo-popo’ of the 2006 World Cup in Berlin.

A girl with naturally very blonde hair wears an Embolo T-shirt and proudly waves a Swiss flag. A colorful group of Italian boys poses because there is ‘Live life’. It is an opportunity not to be missed to be seen by mom, who stayed at home who will follow the game on Rai1 with dad.

Everyone wears tricolor wigs and they are happy. Because football is happiness, especially now that it coincides with the exit from the most critical action of the pandemic. And then today in Rome it can be late: no curfew, we are in the white zone.

The police – discreetly present with officers on foot and on horseback – fear that some accident could happen in the Roman night among the approximately 4,000 Swiss who arrived in the capital and a few slightly tipsy Italians or looking for strong emotions. We’ll see.

For now, everything is calm and we are waiting for the kick-off. And everyone hopes to be able to rejoice and crown a beautiful, very hot and colorful evening with a victory. And at the stadium, one hour from the start of the match, the Italian fans ‘mark the territory’ by singing the anthem of Mameli. Beautiful.