In the Nations League there is Italy.Spain, a remake of the Wembley semifinal 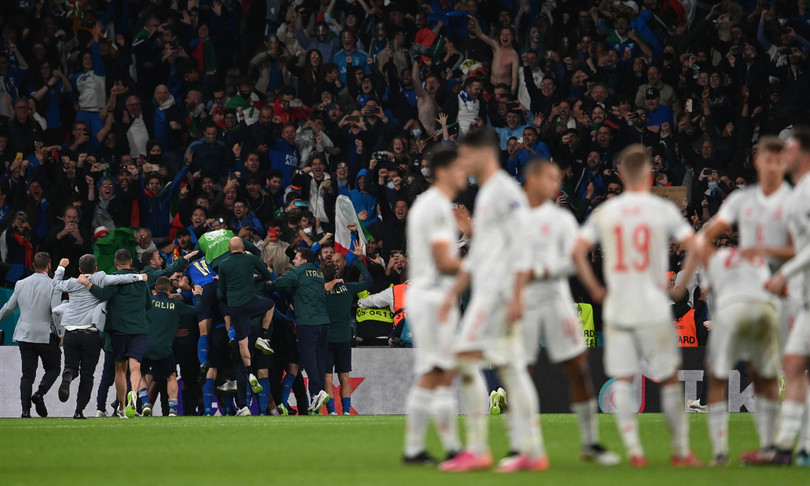 – Three months after the European triumph, the national team is hunting for an encore and focuses on another continental trophy.

The Uefa Nations League, in fact, lands in Italy for the final phase and the Azzurri are hoping to replicate the historic double of cups signed by Portugal by CR7 in the previous edition.

Spain is once again on the Italian journey, in the last challenge overcome with difficulty only on penalties: Mancini’s men will face it tomorrow night at 20.45 in Milan in a replay of the Wembley semifinal.

The match will be refereed by the Russian Sergei Karasev. The San Siro stadium is already sold.out, 37,000 tickets sold, with the fans ready to push the Azzurri towards another ‘magical night’.

On the other side of the Nations League draw, there are France world champions and Belgium led by Lukaku who will take the field on Thursday at the Juventus Stadium in Turin.

the winners of the semifinals will clash on Sunday evening in Milan, in the afternoon the final for third place.

The formation of the Azzurri

On the occasion of the match against the Red Furies, coach Roberto Mancini thinks of a formation similar to that of July with some corrections especially in midfield, destined once again to be the tip of the balance.

The blue module remains the usual 4.3.3: between the goalposts Donnarrumma, the couple Bonucci and Chiellini at the center of the almost certain defense. On the flanks, the favorite full.backs are Emerson Palmieri who has locked the seat because Spinazzola is still out and Di Lorenzo who is playing against a Calabria in great shape but behind in the hierarchies.

In the median the trio Verratti.Jorginho.Barella has an advantage but Mancini will decide only at the last minute. The Italian coach, mindful of the Iberian game that harnessed our midfield at the Europeans, could vary the components to escape the opponent’s pressing.

Among the candidates to take over Verratti, perhaps with the game in progress, there is Locatelli, who appeared in good shape in the latest Juventus matches, and Cristante.

Another option is the Romanist incursor Pellegrini who, by virtue of his offensive vocation, could be deployed in front with retreating tasks.

In attack, the starters, Immobile and Belotti are absent, Raspadori and Kean trample, with the first in the lead. Confirmed Insigne on the left, Mancini must choose whether to complete the trident with an inspired Church on the right or divert it in the middle as a false nueve and insert Berardi.

Without forgetting the candidacy of Bernardeschi able to guarantee greater flexibility. As for Spain, however, the absences of Pedri, Dani Olmo and Morata stand out, as well as obviously that of Senator Sergio Ramos.

In goal Luis Enrique should again focus on Unai Simon, on the side lanes space for Azpilicueta and Marcos Alonso, in the middle Laporte is sure of his place while Eric Garcia and Pau Torres compete in the ballot. In the middle of the field there will almost certainly be Busquets to pivot and Koke, the unknown remains the second half.winger.

Available are Rodri, Merino who has more offensive characteristics and the baby midfielder blaugrana Gavi from 2004. Sarabia, Fernan Torres and Oyarzabal will play in front of each other to occupy the box of the false nueve in the center.

The Azzurri led by Mancini take the field to extend the unbeaten record streak, 37 games, and confirm themselves at the top of European football, the Furie Rossi to avenge the painful elimination in July.

Tomorrow, with the 39th match between the two teams, Spain will become, together with France, the second most faced opponent in the history of the national team.

The balance at the moment is absolutely equal: 11 wins each and 16 draws but if the field is restricted to official competitions (17), the Azzurri are ahead 6 to 3, with 8 draws in the middle.

Other good sensations come from San Siro: the Azzurri have not lost in Milan for 93 years, thanks to a roadmap with 22 wins and six draws, of which five in the last few matches including the one against Sweden which cost the world qualification.