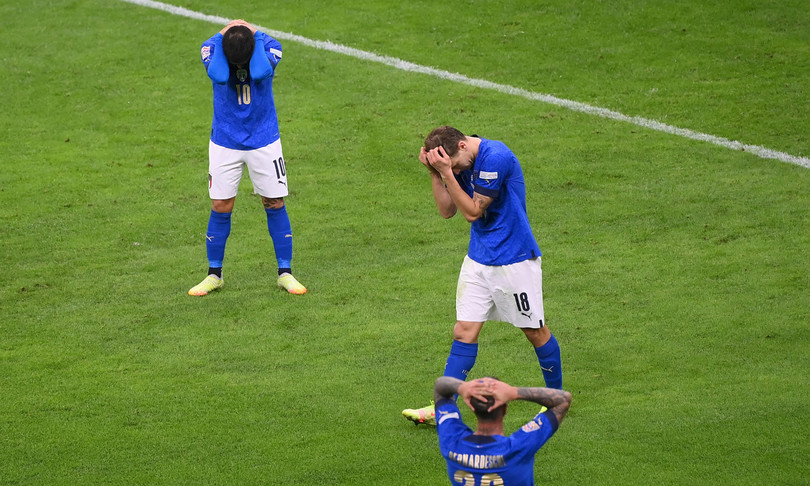 – Italy loses 2.1 against Spain, closes the longest unbeaten streak in the world (37 games without losing), and is forced to say goodbye to the possibility of winning the second edition of the Nations League. At San Siro the Azzurri fall in the semifinals under the blows of Ferran Torres, author of a brace in the first 45 ‘of the game.

For Mancini’s men the flash of hope in Pellegrini’s final is not enough, after more than a time played in numerical inferiority due to the expulsion of Bonucci. The team of Luis Enrique is therefore fighting for the title against the winner of Belgium.France, while the blues have to settle for the final for third place.

The blue approach is excellent, made up of high rhythms and a lot of pressure that seem to be able to put the ‘red furies’ in difficulty. Chiesa is the first to warm Unai Simon’s gloves with a right.foot from outside, then Luis Enrique’s team enters the game and on 17 ‘takes the lead: Oyarzabal puts a great cross from the left in the center, Ferran Torres surprises Bastoni from behind and with a deviation on the right flight he beats Donnarumma.

The former Rossoneri goalkeeper, much booed on his return to San Siro, is likely to combine the omelette a couple of minutes later, missing a non.dangerous shot by Marcos Alonso. Luckily for him the pole saves him with the help of Bonucci who wards off the threat. Wood that also hits Italy in the 34th minute, when Bernardeschi tries a left.handed conclusion by first finding Simon’s parade, then precisely the deflection of the post.

The next action is the one that leads to the biggest goal ball for the Azzurri, sensationally wasted by Insigne all alone in front of the visiting goalkeeper. At 42 ‘the road to comeback for Mancini’s team becomes even more complicated, forced to outnumber due to a double yellow card remedied by Bonucci. Situation that Spain exploits already before the interval, finding the doubling again with Ferran Torres, this time lethal with a header on another cross to kiss Oyarzabal.

In the second half, Italy tries at least with pride to limit the damage, but the only ‘half’ chance is for the Church to hit a post, which is in an irregular position. Spain defended the double advantage without too many problems and on at least two occasions failed the knockout blow with Oyarzabal and Marcos Alonso, still leaving some hope for the Azzurri.

At 83 ‘Pellegrini thinks to shorten the distance by putting in an empty goal on an assist from the Church, but the goal of the Roma captain is useless for the purpose of the result.

The whistles for Donnarumma

San Siro does not forgive, and does not forget. Reading the formations of Italy and Spain, semi.final of the Nations League, the blue goalkeeper, Gianluigi Donnarumma, was overwhelmed by the predictable whistles of his now former Rossoneri fans.

The 22.year.old from Castellammare di Stabia, star of AC Milan until last season and today the extreme defender of PSG, has in fact been the designated target for several months by some irreducible players who are struggling to accept his transfer beyond the Alps. At the end of the match, the comment of the coach, Mancini, also arrived: “” I was very sorry. “