Bottas wins the Turkish GP, Leclerc is fourth ahead of Hamilton 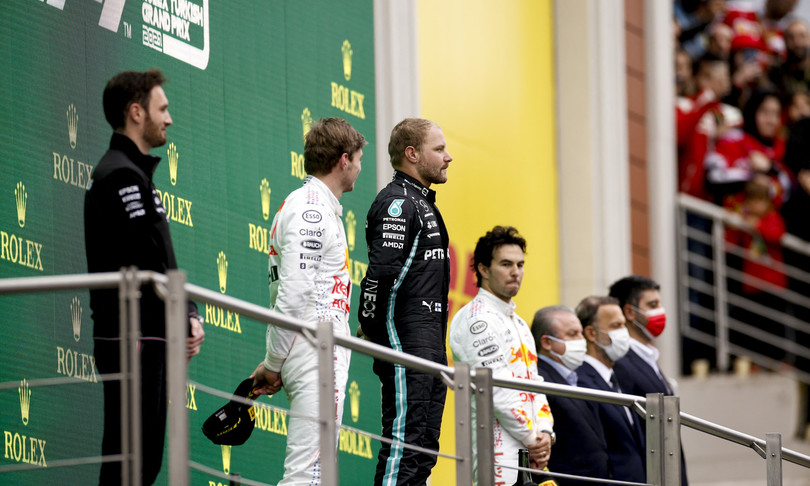 Valtteri Bottas in a Mercedes won the Turkish Grand Prix, 16th round of the Formula 1 world championship, preceding Max Verstappen’s Red Bull who, thanks to second place, returns to the top of the world championship.

On the Istanbul Park track, humid due to good rain fourth place for Charles Leclerc’s Ferrari behind Sergio Perez.

Fifth only Lewis Hamilton whose comeback from the eleventh starting place was slowed down by a wrong pit stop strategy.

He and Leclerc attempted to go all the way to the finish on the intermediate tire, before giving in and making their stop in the final laps.

Good eighth place for the other Ferrari of Carlos Sainz who came up from the last row. The Cavallino gained points over McLaren, rival for third place in the constructors ‘classification, which had to settle for Lando Norris’ seventh place and Daniel Ricciardo’s 13th place.

The race was characterized by the track that was always humid even without rain which never led to the assembly of slicks. The only one who tried, Vettel on lap 38, found himself in great difficulty.

Bottas started from pole and dominated the race losing first place only for a few laps after the pitstop.
“It has been a long time since the last win and I feel good, this is a victory that I have earned and deserved,” commented the 32.year.old Finnish driver.

“It was one of the best races I’ve ever had, I’ve always been in full control. When there’s only one line that dries you have to stay focused throughout the race. It wasn’t easy to choose the right strategy.”

Behind him were the two Red Bulls: second place allows Verstappen to return to the top of the world championship with 6 points clear of Hamilton with six races to go, third the Mexican Perez.

“It wasn’t easy today, the track was slippery and we had to manage the tires without being able to push”, explained the 24.year.old Dutch driver, “Bottas had a better pace, but I’m happy for second place because it was easy to make mistakes. I’m happy to be on the podium “.

On the duel with Hamilton he was not unbalanced: “We have to push and try to improve, then we’ll see what the final result will be”.

The British world champion was less serene, who at a certain point had climbed up to third place, and was the protagonist of a harsh rebuke to his garage for the final pitstop which he would have done without: “I told you, we were wrong! “he yelled into the radio team.