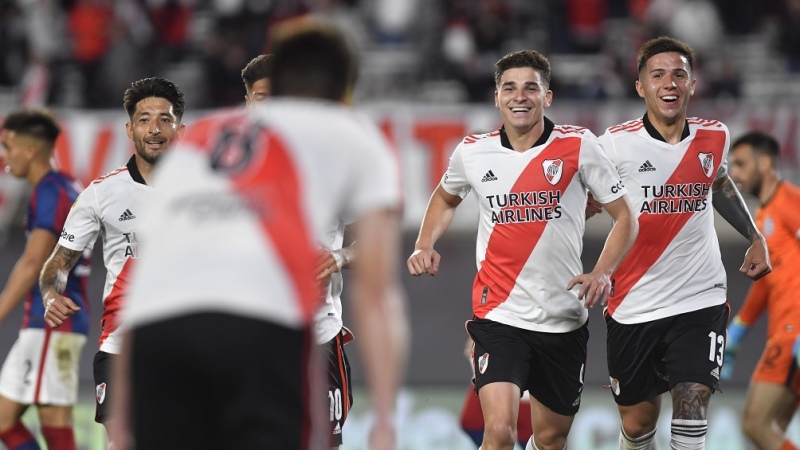 Julin lvarez celebrates with his teammates one of his three goals. (photo Alejandro Santa Cruz)

River Plate, with a memorable performance by Julin Álvarez, author of a hat-trick, defeated San Lorenzo 3-1 for its sixth consecutive victory in the Professional Football League that has it as leader after 16 dates.

Marcelo Gallardo’s team reached 36 points and took four ahead of Talleres de Crdoba (32), his immediate pursuer and next rival in the clash on Thursday 21 at Mario Kempes.

The first part had River as dominator, but San Lorenzo was dangerous in each recovery of the ball. The “Cicln” played coordinated in the midfield and although it presented a line of three in the background, it changed it to one of five in each River attack.

River suffered the absence of Fabrizio Angileri and could not unbalance on the wings. Alex Vigo had a party to forget and not extra his replacement at halftime.

San Lorenzo took advantage with an error of the “Millionaire” in defense. The play started on a throw-in. Felipe Pea Biafore could not on the mark with Franco Di Santo and the ball was served to Fernndez Mercau for a cross and corner shot.

The leader of the championship could not find spaces. Enzo Prez was isolated, Nicols De La Cruz was replaced by injury and Agustn Palavecino had flashes of lucidity.

Despite the development, River insisted and physically wore down San Lorenzo.

Julin Álvarez was the key to success once again. The forward of the Argentine national team received from Santiago Simn and took a shot with an effect that slipped into the lower corner. Impossible for Sebastin Torrico.

Gallardo’s men arrived two more times: a header from Álvarez that Torrico sent to the crner and a crossed shot from the Cordobs attacker.

Julin lvarez celebrates with his teammates one of his three goals. (photo Alejandro Santa Cruz)

River came out determined in the second half, pushed by his people, in search of the result that would serve him to gain more advantage in the fight for the championship.

San Lorenzo waited for him attentive to a counter, but the physical performance was no longer the same. At the same time, Enzo Prez strengthened River’s game and Palavecino accompanied that trend.

Robert Rojas entered for Vigo (also injured), played as a winger and scored the goal with a header after a free kick taken by Álvarez that was narrowly missed.

Shortly after, the Paraguayan started the play of River’s second goal with the center that found Palavecino in the area. The former Platense could not go head-to-head with Torrico, who rebounded, but Julin Álvarez was there to push the ball into the net.

Álvarez’s great night culminated with the third. He did not give up a shipment to the void and defined between Torrico’s legs in the absence of six minutes.

The 3-1 brought relief to the fans, in a Monumental that fulfilled the capacity, against a rival who complicated it during a period of the game and was the executioner in previous meetings.

People applauded for another good game by River and prayed for the continuity of Gallardo, who they cheered on more than one occasion.

On the next date, River will seek to gain more advantage against Talleres in Córdoba and San Lorenzo, who are experiencing difficult moments from football, with the Uruguayan coach Paolo Montero very questioned, playing the classic against Huracn, a hinge match for his future.

Changes in the second half: At the beginning, Robert Rojas for Vigo