“Ansu Fati have a talent and will pursue the path of glory.” 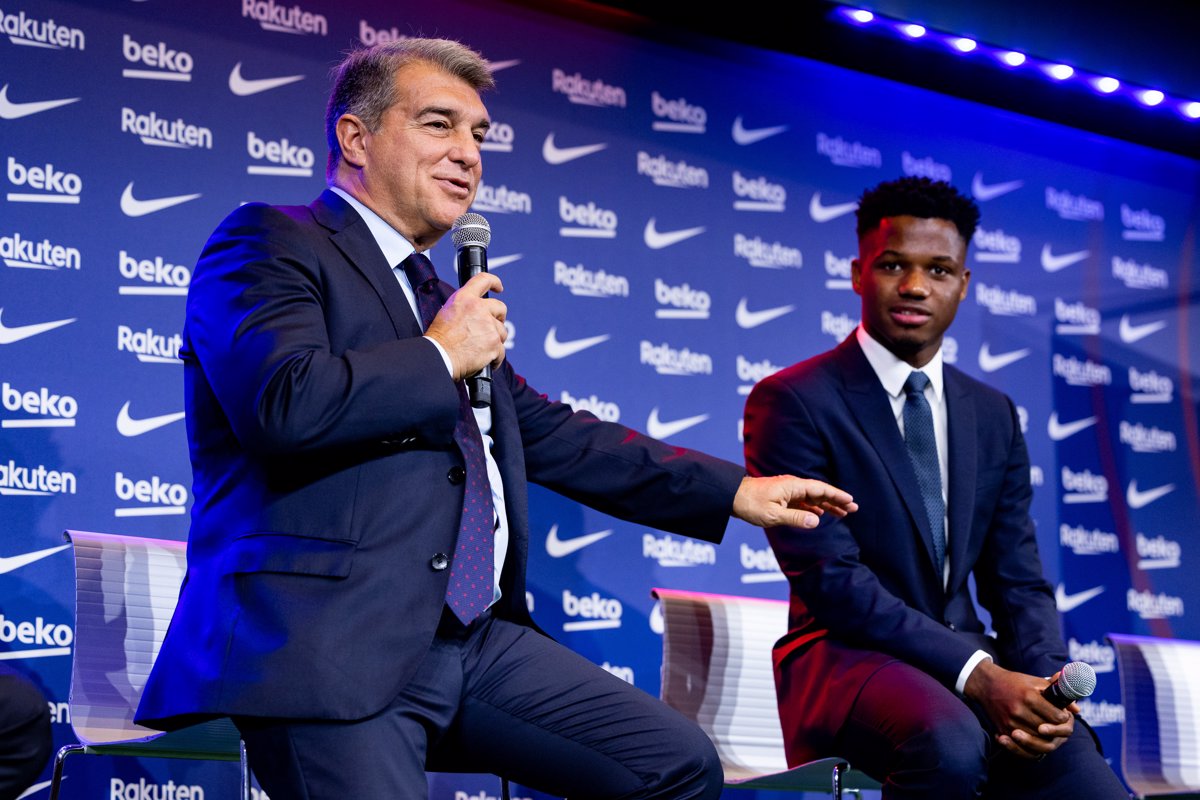 Joan Laporta, the president of FC Barcelona, has assured that Ansu Fati, whose contract has been extended until 2027, has the “gift” of turning practically every play into a goal, and has praised their agreement to go together, hand in hand, along the “road of glory” and success.

“We adore Ansu, and in addition to his soccer skills, we have attempted to develop him as a person.
He possesses exceptional skill, and he is destined to accomplish many triumphs and continue on the path of fame.
Ansu, we’ll do everything we can to assist you reach your ambitions, which are also ours “At a news conference, he expressed his confidence.

For Laporta, just like when he renewed Pedri, it was a “great day” for ensuring the “immediate present and future” of the club. “We have been talking about the affection we have for each other, how sacrificed Ansu has been these years at La Masia to get here. We are all very excited, for us it was very important as a club to regularize this situation,” the president celebrated.

He explained that the negotiations have been “very friendly” despite the fact that the club and the player, through their agent Jorge Mendes, tried to achieve the best for their interests. “Each one was trying to reach a meeting point that we have found. We are very happy, it is a special day because we like to announce the renewal of Ansu Fati,” he added.

“He was very calm because he knew that Ansu wanted to continue and stay at Barça, we had to do everything possible to make him stay but that left me very calm. Both his family and his representative know that the best place where Ansu can be is the Barça, and I have not suffered excessively. We all wanted this to end like this, “he said, after Ansu acknowledged that he had had offers from other clubs.

As for the goal Ansu can reach, Laporta assured that he must reach it without pressure. “He has said it himself, he has to progress and mature because he is very young, but we all have great hopes but we cannot put that pressure on him, a burden that is difficult to overcome at times,” he acknowledged.

“He is very intelligent, mature for his age, he has a family that helps him, and for us it is a reality and a great hope. When he kicks, he puts it in and that is a gift. But we have to be careful. Hopefully what we think is confirmed and we all have to help him because he has a special talent and gift, “he celebrated.

As for wearing the ’10’, inherited from Leo Messi, he assured that it was a “brave” decision. “We don’t want to put pressure on him and with the ’10’ he was very brave and said that he wanted it if the captains authorized it. And he came out of an injury. The ’10’ suits him very well, and Ansu has already said that it generates motivation for him. and not a pressure, which will already have it because the public is in love and it is an added requirement that it carries naturally, “he argued.

In addition, he assured that the dream of his Board is to have a starting eleven with boys from La Masia, led by talents such as Ansu Fatu. “Yes, it would be a great illusion and the dream of all my Boardmates and mine come true, to incorporate players of this high level and have them come from La Masia. An eleven from La Masia is what would make us most excited”, reiterated.

On the other hand, he claimed to have “good feelings” for Sunday’s Classic at the Camp Nou. “The team has been recovering injuries, such as Ansu Fati or Kun. There are players who have been improving their contribution. We play at home, we will have the support of the public and take advantage of to ask them to come. We face Real Madrid, which comes with many you win, but I am optimistic and I confirm that we will win. And with a goal from Ansu, to celebrate it, “he added.