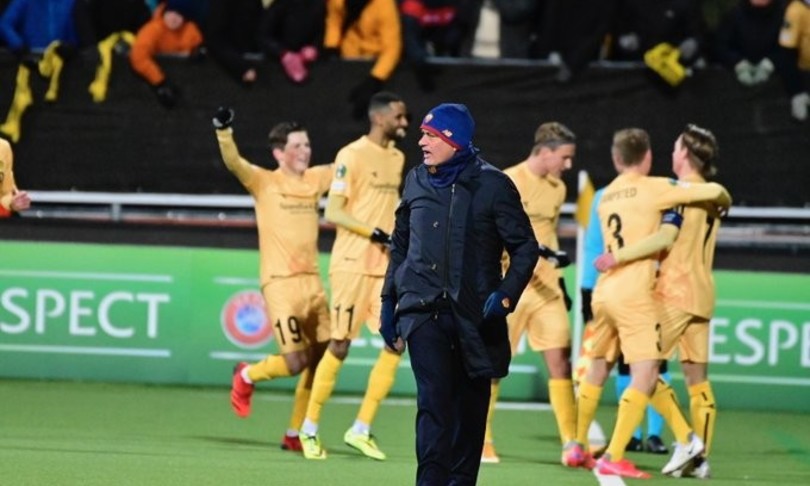 Incredible fool of Rome in the Conference League, which even falls 6-1 against Bodo Glimt.

Triplet for Botheim, then the goals of Berg, Solbakken and Pellegrino make Mourinho’s team live a nightmare, which is of little use to the goal of Carles Perez.

Absolutely negative performance for the Giallorossi, who allow themselves to be overtaken even at the top of the table in Group C, slipping to second place just to -1 from Knutsen’s men.

The start of the match is already a nightmare: the Norwegians take the lead with Botheim after 8 minutes from the kick-off, then doubling with Berg’s blow from outside in the 20 ‘.

In the middle there was also another opportunity for Konradsen, to underline the too passive attitude of Mourinho’s team and the absolute domination of the hosts.

Roma, however, began to take courage and on 28 ‘shortened the distance with Carles Perez, who controlled a throw from Diawara and made no mistake in front of the goalkeeper.

At the beginning of the second half the Norwegian team stretches again with Botheim, the Giallorossi disappear from the field and within a few minutes they even suffer three more goals: Solbakken, Pellegrino and Botheim again, who takes the ball home in a dream evening for the Norwegians.

Lazio tries them all but fails to overcome Marseille in the third day of the Europa League. At the Olimpico it ends 0-0: the biancocelesti rise to 4 points in the standings momentarily equal to the leaders Galatasaray, engaged tonight against Lokomotiv Moscow.

Remains a point behind the team of Sampaoli, still dry of victories in this initial phase of the tournament.

In a very balanced start to the game, it was the French who created the first scoring ball in the 14th minute, when Cengiz Under coordinated on the fly on a cross from the left, but sent a high left-handed player from an excellent position.

Later Milik also tries with no luck, while the Capitoline players show themselves very dangerously only in the 34th minute, when Luiz Felipe hits from a corner finding the lucky opposition of Pau Lopez stationed there. On the other hand, a great save by Strakosha avoids the goal of Under’s advantage, whose left-hander was directed towards the corner to the right of the Lazio goalkeeper.

In the second half the balance resists and the two teams respond on occasion: Immobile first fails then sees a goal canceled for offside, Under and Payet instead scare Strakosha on the opposite side of the field.

At 69 ‘he tries to get back to the Immobile chair, who from a tight angle kicks into the goal by splintering the crossbar from an impossible position. In the final, Sarri’s team seems to believe in it more and at least another couple of times the advantage with Pedro and Raul Moro, but providentially stopped by a very attentive Pau Lopez. The triple whistle resists the 0-0.

Napoli-Legia 3-0 with Insigne, Osimhen and Politano

Always winning so far in the league, Napoli also unlocks in Europe, regulates the Legia Warsaw and hooks Leicester to 4 points in the Europa League group: first the Poles remain at 6, last the Spartak Moscow at 3. The goals of the 3 -0 final bear the signatures of Insigne, Osimhen and Politano.

In view of the match against Roma, Spalletti initially renounces Fabian Ruiz, Mario Rui and Osimhen and chooses Mertens as partner of Lozano and Insigne. Legia, in the relegation zone in the league, relies on a very prudent 3-5-1-1 in search of spaces on the counterattack.

In the first half hour the hosts siege the Poles’ area and collect at least four great chances without passing: Miszta, the 2001-born guest goalkeeper, opposes first Mertens and then Lozano while a great diagonal on the fly of the Belgian ends up just outside.

Attack from time to time at the end of the first 45 minutes there are only 11 corners, the assets of Legia there is only an isolated attempt by Muci, a promising Albanian striker.

The second half starts again with Spalletti’s men on the attack: Demme and Insigne try, then before the hour of play Ruiz and Osimhen enter. Napoli raises the pace, Miszta still walls Insigne: when Manolas gets hurt, Petagna enters and the hosts move to the three-man defense.

The turning point in the 76th minute: Emreli from the outside splinters the post, on the overthrow in front of Insigne with a right-footed rebound he finds the splendid goal of the advantage. At 80 ‘the script is repeated: Kastrati squanders the opportunity of the same, Osimhen signs the 2-0 on the counterattack. Everything becomes easy, and the 3-0 touched several times takes place in the 95th minute thanks to Politano. On November 4th Naples and Legia face off again, this time in Warsaw.