The first 18 inductees of the FEB Hall of Fame are greeted with emotion by La Cartuja. 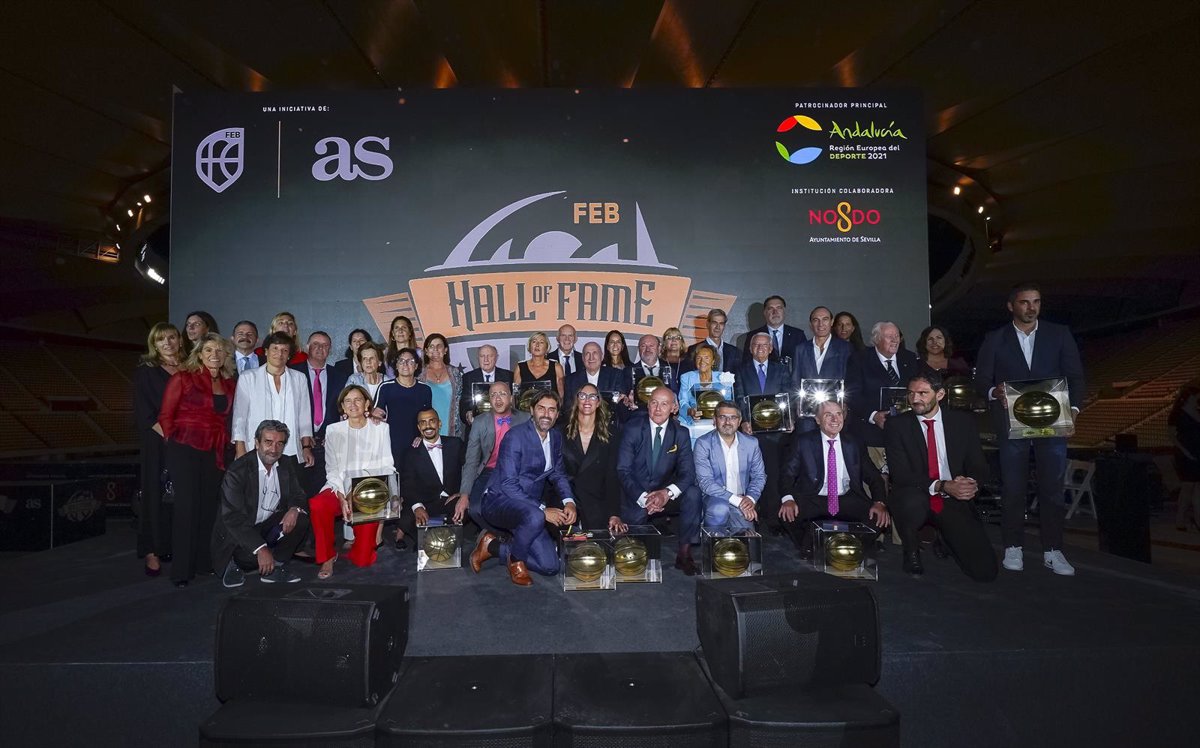 The first entry of members into the Hall of Fame of the Spanish Basketball Federation (FEB) took place at the La Cartuja Stadium in Seville on Thursday, a first emotional Admission Ceremony that was starred by the first 18 members of this novel initiative, which is intended to recognize and remember prominent players and all national basketball groups.

Juan Carlos Navarro, Amaya Valdemoro, ‘Epi,’ Juan Antonio Corbalán, Emiliano Rodrguez, Fernando Martn (in memoriam), Maribel Lorenzo (in memoriam), and Arvydas Sabonis were among the players who participated.
Mara Planas, Pedro Ferrándiz (the only one who was not there), and Antonio Daz Miguel (in memoriam) were acknowledged at the level of coaches.

The first promotion that received a golden ball and the insignia that credits them as ‘hall of famers’ was completed by the referee Miguel ngel Betancor; the contributors Club Esportiu Laietà, Ramón Trecet, Anselmo López (in memoriam), Andrés Montes (in memoriam), the city of Alcobendas, and the women’s senior team that was the European champion in 1993.

“I’ve had the privilege of serving in this capacity for the past five and a half years; we’ve had some fantastic nights, but none quite like this one. This is much more; I travel all over the world, and it is my way of repaying their admiration “, said Jorge Garbajosa, the president of the federation.

For the head of the FEB, “expressing with words” his feelings during the event was something “very difficult.” “Just say thank you for allowing me to live tonight,” said the former Madrid player.

For his part, Javier Imbroda, former national coach and Minister of Education and Sports of the Junta de Andalucía, recalled that he is “one of the many children who grew up with a poster of the national team in their room.” “Thanks to the 18 chosen, you were always an inspiration, thank you very much for everything you have represented and continue to represent,” he said.

The first to enter the Hall of Fame was Ramón Trecet, who claimed to live “one of the most exciting moments” of his life and who came up with the same suit with which he broadcast his “last game” for the Spanish team. After him, it was the turn of Carolina Mújica, captain of the historic 1993 European champion women’s team, who dedicated it to Pilar Valero, and Juan Carlos Navarro, happy to receive a “special” recognition and who remembered FC Barcelona and the national team, its “two families”.

Alberto López, son of the historic Anselmo López, celebrated “a great initiative” and thanked him for the choice of his father, and Nelson and Orson, the sons of the late Andrés Montes, pulled their father’s famous slogan to remember that “the life is wonderful. ” Anabel and Silvia Nieto represented their mother, the remembered Maribel Lorenzo.

Antonio Martín, president of the ACB, received the mention on behalf of his brother Fernando Martín, Eva Latorre did so on behalf of her husband, Antonio Díaz-Miguel, and the former Lithuanian player Arvydas Sabonis, the last to go on stage, did not wanted to lose a ceremony for a recognition that he wanted to “share” with Gonzalo Gonzalo, late president of the now-defunct Forum and who was not “afraid” of signing him.

Amaya Valdemoro dedicated it to her father, María Planas acknowledged not having “words for this honor”, Juan Antonio San Epifanio, ‘Epi’, did not forget “all” his companions because without them he would not have been chosen, and Juan Antonio Corbalán, his teammate and the 1984 Olympic silver medalist, stressed that all basketball is “part of the same family and of the same illusions.”

Emiliano Rodríguez recognized his emotion, Miguel Ángel Betancor pointed out that with his appointment “arbitration” was fundamentally involved, Rafael Sánchez Acera and Angel Sánchez Sanguino, vice mayor and second deputy mayor of Alcobendas, received the distinction on behalf of the Madrid town, and Jaume Riera, president of the Laietà Club, who said that his entity “represents what sport should represent.”

The act was closed by the president of the Higher Sports Council (CSD), José Manuel Franco, who stressed that “one of the great honors” he has had since his accession to the position was to “initiate the file that has concluded with the concession from the Grand Cross of the ROMD to Pau Gasol “.

“Those basketball values ​​are still important and are valid for examples like yours. What you do makes our sport and our country great,” admitted the leader.