River beat Talleres and is getting closer to the title 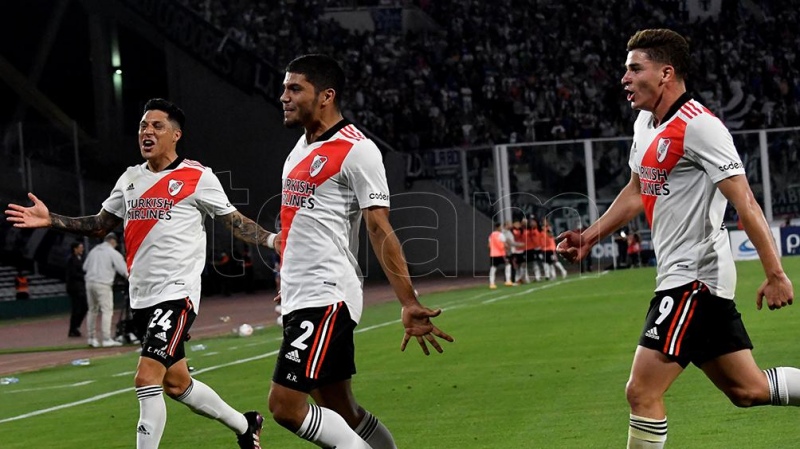 Rojas, author of the goal that opened the game for River (Photo: Laura Lescano).

The River leader, who played with one man less from seven minutes, clearly surpassed the guard, Talleres, from Cordoba, 2 to 0 tonight, in a match that closed the 17th. date and increased the lead at the top of the Professional League tournament.

The “Millionaires” thus added their seventh consecutive victory and reached 39 points, seven more than Talleres, which lost three of the last four games and is moving away from the dream of fighting for the title.

Very intense was the development of the game in the opening minutes, with the visitor proposing and the ‘T’ waiting in their field to come out against, although they had not finished accommodating and the first blow of the night scene arrived with the expulsion from central Felipe Pea Biafore in the River Plate team.

The youthful defender arrived badly with both feet forward against Juan Ignacio Mndez, and the referee Daro Herrera did not hesitate to show him the direct red card after seven minutes..

Confused River with a man less, the local, emboldened, managed to put the game in the rival area and generated two chances: first Michael Santos fell before the mark of Robert Rojas, and asked for a penalty that he was not awarded. Then the same Uruguayan forward failed a clear option when he went hand in hand with Franco Armani.

Despite playing with 10 men, River managed to have a very concrete chance at 21 minutes, when Benjamn Rollheiser was unmarked on the left, he enabled Julin Álvarez, who entered only in the middle, but goalkeeper Guido Herrera showed off. containing the scorer’s shot.

Afterwards, the “Millionaire” settled down, he became solid in defense with Enzo Prez in the last line, and he did not have major shocks, beyond a run by Colombian Diego Valoyes.

He was leaving the first half and River quickly played a ball stopped on the right with Santiago Simn, the youth reached the bottom and threw a low center that found Rojas entering the middle to push the goal and decree the 1 to 0 for the leader of the contest. Marcelo Gallardo indicated the “dash” from the side of the field.

In the final shot of an intense first half, Santos had it again for the “T”, he dominated in the area, but Armani tapped just enough and the visitor went upstairs to the locker room.

Without too many ideas, in the Talleres complement he held out hope in Valoyes’ imbalance, but the only one that the Colombian had after a great dominance with the cue, threw it off in the definition.

With patience, River waited in his field and bet on the hierarchy of his players, mainly that of Julin Álvarez, who every time he had contact with the ball led to problems for the rival.

The talented youth, with spaces, over 25 minutes led a fast counter, got rid of Rodrigo Villagra and enabled the entered Romero on the right, who dominated and defined below Herrera for the 2 to 0.

That goal definitively closed the result. Workshops lacked football and was repeated in centers that easily deactivated the visiting defense, which was complemented by the presence of Jonatan Maidana to reinforce the place left free by the expelled Pea Biafore.

On your way to achieve the first local title with Gallardo as coach, River will receive Argentinos on Monday without Enzo Prez, who reached the fifth yellow card, while the Cordobes that day will go for the recovery in their visit to Lans.