Battaglia thinks of two names for the duel against Vélez 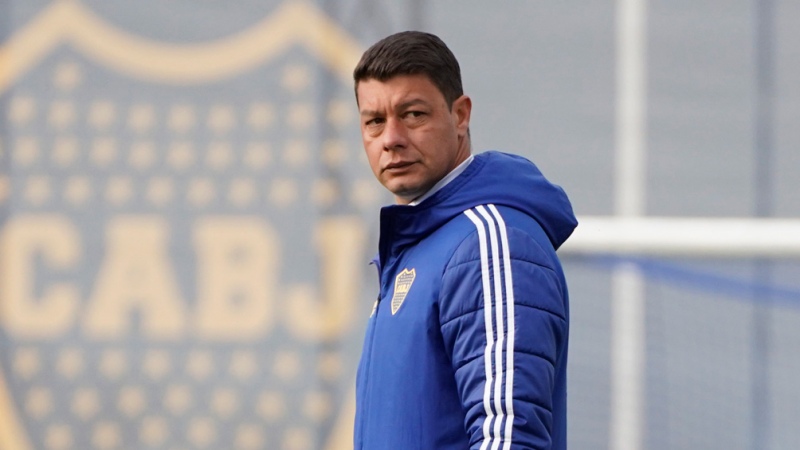 Battaglia with two doubts for the duel against Vlez. Photo: @BocaJrsOficial

Boca coach Sebastin Battaglia maintains the doubt in the midfield between Rodrigo Montes and Aaron Molinas, to play away against Vlez on Sunday for the 18th. date of the Professional Football League.

If he is inclined to give continuity to the ownership of Molinas, the DT from Boca Juniors will repeat the team that beat Godoy Cruz de Mendoza on Wednesday by 2 to 1.

The possible formation of Boca before those of Liniers would then be with Agustn Rossi; Marcelo Weingandt, Carlos Izquierdoz, Marcos Rojo and Frank Fabra; Agustn Almendra, Jorman Campuzano, Juan Ramrez and Aaron Molinas or Rodrigo Montes; Cristian Pavn and Luis Vzquez.

In today’s practice at the Ezeiza campus, the technician did not stop a team, since the starters -who did light exercises with the ball- played a very intense game less than 48 hours ago in the Bombonera against “Tomba”.

Battaglia’s doubt lies in repeating the eleven that cut the Mendoza team’s unbeaten streak of six games or if against a rival with good ball handling, such as those led by Mauricio Pellegrino, he will put a player with more dynamics and marks in the middle of the court.

If the Boquense DT decides to go with the same players as last Wednesday, it will be the first time since he took office on August 16, that he chose the same eleven in two consecutive games.

The tranquility for Battaglia and the technical staff, at this time, was that Agustn Almendra trained today with the group. If Montes entered, the author of two goals in the games against Lans and Huracn could play in a more advanced position, as a kind of hook.

The 21-year-old midfielder, the figure of the team in the victories against “Globo” and Godoy Cruz, retired 23 minutes into the second half against the Mendoza team with pain in his left ankle.

Almendra already had an injury in that area, a cruciate ligament strain against Sarmiento de Junn in a preparation friendly -in early July- that had him inactive for forty days and caused him to miss the series matches against Atltico Mineiro for the knockout stages of the Copa Libertadores.

“Agustn has a European destiny,” said Juan Romn Riquelme in the last interview he gave to a television network, referring to the footballer who was once tempted by Italy’s Npoli and who last year, in the midst of a pandemic, wanted to leave the club for personal issues.

In the event that Montes entered through Molinas, who until now was more important as a spare part than from the beginning, the coaching staff will seek more balance in the middle with a player who can also contribute a goal, since he scored a goal in all three. games that he played as a starter.

The list of concentrates is also awaited to know if Eduardo Salvio will finally be among those called up, or if he will continue on the waiting list as in the last three calls since he was discharged, after recovering from the operation on his right knee. last March.

“Toto” Salvio has already been in several formal soccer practices for the substitutes, but it seems that the coaching staff is still not convinced that he can integrate the relay bench.

Meanwhile, Edwin Cardona and Nicols Orsini continue their recovery process from both grade two tears in the right femoral biceps.

It is estimated that the Colombian midfielder can – from the beginning of next week – start training with the rest of his teammates, with the possibility that he could be among the concentrates to play against local Gymnastics, on Saturday, October 30.

As for the Peruvian defender Luis Advncula, improvement of his tear in the cudriceps of the left leg, which he suffered during a practice in the selection of his country, in the last call of the South American qualifiers for the Qatar World Cup 2022.

It was also confirmed that the pending reserve match against San Lorenzo for the Professional League, which due to its level of play generated expectations in the “Boca world”, will be played on November 11 in Ezeiza.

Those led by Hugo Ibarra and Mauricio “Chicho” Serna add 33 points, to 3 of the student leader. On Monday from 10 o’clock they will play against Vlez for the 18th date, as visitors at the Ituzaing Sports Center.

The Boca squad will return to training tomorrow at the Pedro Pompilio complex from 3:30 p.m., and then remain concentrated in a hotel in the Monserrat neighborhood of Buenos Aires.

Boca visit Vlez on Sunday from 8.15pm, on the 18th. date of the Professional Football League, with the arbitration of Diego Abal.