With five Paris stars flying with Messi and Neymar 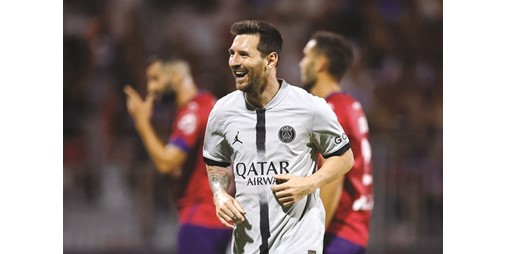 Argentine Lionel Messi scored two goals, one of them acrobat, and the Brazilian Neymar assisted 3 decisive balls and added a goal to start Paris Saint-Germain’s campaign to defend its title in the French Football League with a sweeping 5-0 victory on Saturday at its host Clermont, in the absence of his star Kylian Mbappe injured.

Neymar continued the levels he made in the preparatory period and scored the first goal (9), while the second came from the signing of Moroccan international Ashraf Hakimi (26) and the third from another Brazilian defender Marquinhos (38), before Messi concluded with a fourth goal (80) and a fifth acrobat (86). ).

The capital club is entering the season and its goal is to achieve the Champions League title for the first time in its history, after it has dominated the local league since the Qatari takeover and won its title 8 times in the last ten seasons.

He hopes to be led by new coach Christophe Galtier, who arrived in Paris after the dismissal of Argentine Mauricio Pochettino. The pre-season appeared promising for the Parisian club’s fans, with the French Champions Cup winning at the expense of Nantes 4-0 late last month in a match in which Neymar scored two goals and Messi one.

Earlier, Monaco took advantage of a late VAR decision to win 2-1 away to Strasbourg.

This victory comes before its match against its Dutch host PSV Eindhoven on Tuesday in the second leg of the third round of qualifying for the group stage of the Champions League next season.

In other matches, Nice tied with its returning host Toulouse 1-1, Lille beat its guest Auxerre 4-1, and Lens beat Boulaert-Deleles 3-2, and the match between Montpellier and Troyes ended with a victory for the first 3-2. Angers tied with its guest Nantes 0-0.