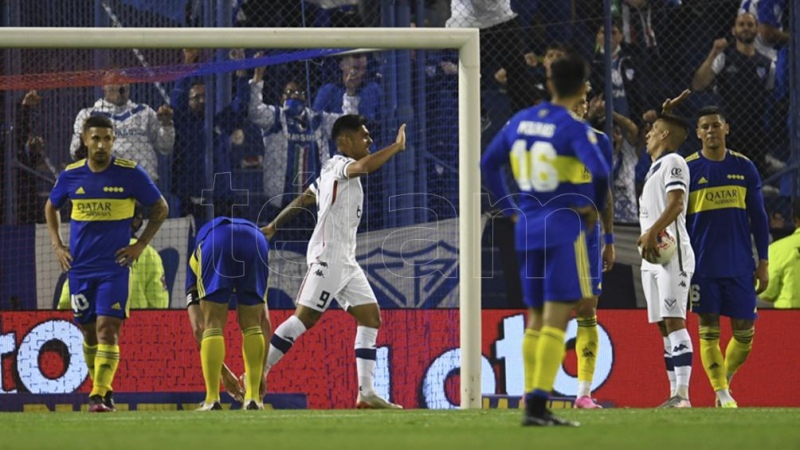 Vlez Sarsfield beat Boca Juniors 2-0 at Liniers, on the 18th. date of the Professional Football League (LPF), exhibiting a manifest superiority throughout the 90 minutes that exposed the condition of “team in formation” that constitutes this team led by Sebastin Battaglia against a better shaped rival that with this victory He cut alone at the top of the Annual Qualifying Table for next year’s international cups.

The match in Liniers, transcendental for the pretensions of both, more than for the local championship, because of their locations in the Annual Qualifying Table for the 2022 international cups, had in the previous one a key point that could tip the balance towards one or the other. side: the middle of the court.

And in that position, the technical director of Boca de Janeiro, Sebastin Battaglia, made a logical position against a strong rival in the gestation area, with footballers who could bring him play in the middle and dynamics on the sides. The first two were then Jorman Campuzano and Agustn Almendra, and the remaining pair was composed by the boy Rodrigo Montes and Juan Ramrez.

To this Mauricio Pellegrino opposed something similar, with Federico Mancuello and Gernimo Poblete as internal and Agustn Bouzat and Lucas Janson (two ex-Boca) on the outside. And the experience of these four prevailed over, especially, the young Almendra and Montes.

The fact is that precisely the two boys from Boquenses never could with the ubiquity of Poblete, but and above all, the quality and deployment of a very mature Federico Mancuello, around whom the best possibilities of the local team were generated.

That is why Vlez had quantitatively and qualitatively the ball and left, during the course of the first half, that feeling of superiority that brought him closer to the goal defended by Agustn Rossi than Boca to Lucas Hoyos.

And as everything seemed a matter of time and the local public itself seemed to intuit with their breath that playing like this, the goal was going to fall sooner or later, when, stepping on 40 minutes, Mancuello drew it with a crossed left foot that struck the second post. Rossi.

By then the two lines of four people from Boquenses had already failed to meet their containment objective, which was also out of phase when another talented man like the young Thiago Almada came into action.

For the second half Boca needed an urgent change of position, but his passivity and the greater ambition of the homeowner already put him closer to the second goal, because Boca, despite the income of Norberto Briasco by an expressionless Cristian Pavn (se He was devoured by left back Francisco Ortega) and Aaron Molinas to have a ball that had never found his replacement, Ramrez, equality was always far away.

And saving the distance because he played almost the entire game with 10 men due to the expulsion of Marcos Rojo, today Boca repeated that expressionless performance that he observed in the superclassic that he lost a couple of days ago on the River court.

Of course, this time it was 11 against 11 during the 90 minutes and then there were no excuses other than to accept the superiority of a rival who has the best team in Argentine football, even above the two mentioned Boca and River.

And as a sample, only one button is needed, that Boca has not registered a pure shot to the goal of Hoyos in the whole game and on top of it received the second goal, from Cristian Tarragona, with a low left-foot on the hour, they were two edges of a The same hand that brought him back to the reality of a team still very much in formation, which has difficulty playing against armed rivals like the one tonight.

In this way, Vlez settled in the Annual Table at the top of everything and with a 10-point advantage over Boca, which today could be the second to qualify for Libertadores 2022 if River consolidates with the title the advantage it has in the LPF and taking into account that Colón, the other one who separates them, is already about to have won the League Cup.

Thus, Vlez beat Boca again, something that he had not achieved since 2015, and having had a better start to the championship, where he added half a dozen dates without victories or scoring goals, today he could be fighting the championship hand in hand with
River, from which he is separated by eight points and with one most played game, just one unit below the only guard who is
Workshops and with seven dates ahead for the end of the contest.

For its part, Boca was in fourth place, with the same number of points as Lans and one unit below the Velezanos, adding to this the negative balance of the injury of the right-back Marcelo Weingandt in the first half, when he suffered the dislocation. of the right shoulder.

Change in the first half: 32m. Eros Mancuso by Weingandt (B).

Changes in the second half: 12m. Aaron Molinas for Ramrez (B) and Norberto Briasco for Pavn (B), 24m. Luca Orellano for Bouzat (B); 33m. Agustn Mulet for Mancuello (V); 40mj. Ricardo Centurin for Almada (V), Leonardo Jara for Janson (V); Cristian Tarragona for Lucero (V) and Exequiel Zeballos for Montes (B);