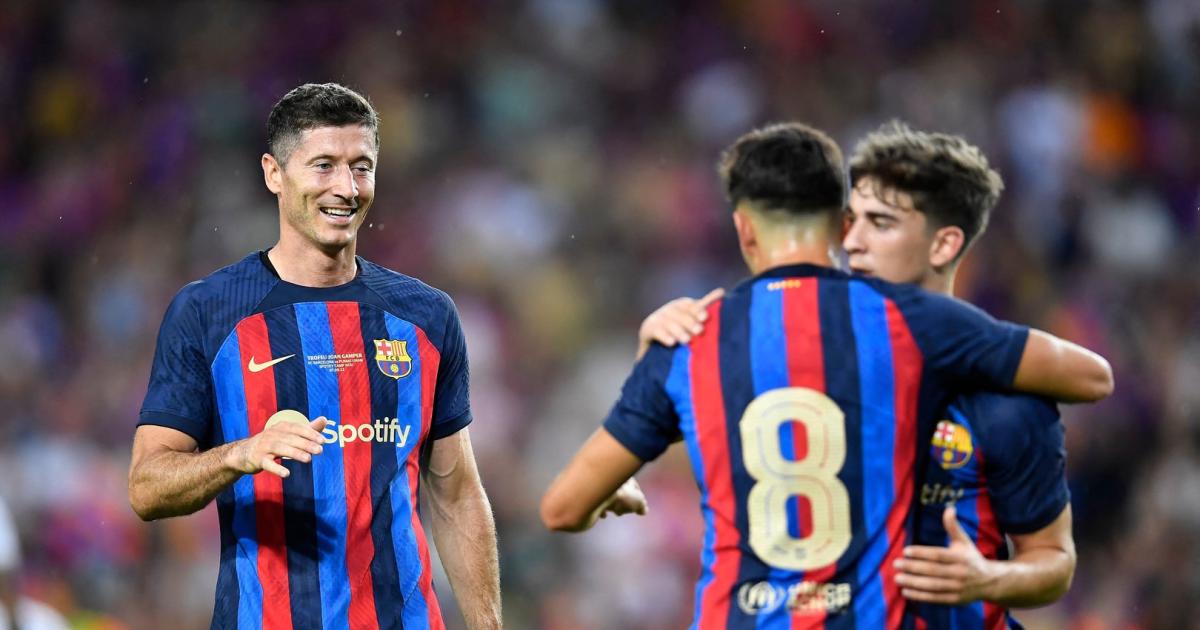 The Catalans are plagued by 1.3 billion debts. A day before the start, Lewandowski and Co. still had no permission to play.

At the start of the Spanish league season, FC Barcelona will play against Rayo Vallecano at the Camp Nou on Saturday.

The rest is complicated.

As the Catalans officially announced on Friday afternoon, the club agreed with the company Orpheus Media on the sale of a further 24.5 percent of the shares in Barça Studios – a media platform to which, among other things, the club’s own broadcaster belongs. The deal is expected to bring 100 million euros. Barcelona had already taken in 868 million euros – by pledging a total of 25 percent of the income from the TV rights for the next 25 years on the one hand and selling a 25 percent stake in Barça studios. But whether all the conditions are met for the league association to register new players was still open on Friday.

Every summer, the league calculates the amount that clubs are allowed to spend on salaries. This framework results from income, expenses excluding salaries and debt repayment. The Catalans are stuck with the insane contracts of the past. Last season the payroll cost was €560m, €144m over the limit. Costs were reduced through sales and renegotiations. And that bears strange fruit: Dutchman Frenkie de Jong is downright bullied. He reportedly earns more than 20 million euros.

Online magazine The Athletic reported that Barça informed De Jong in mid-July that he would have to forego or leave significant parts of his salary. After his refusal, the club threatened that his contract could be declared void by a court. The blossoms turned into a war of roses. The midfielder accuses the club of “blackmail” and a “smear campaign”, Mundo Deportivo and Sport reported. His lawyers want to sue the league, the players’ union in Spain and the international FIFpro against the actions.

When Barcelona introduce a new signing, everything is choreographed down to the last detail – right in the middle there is a proud player and an even prouder president. 60,000 are said to have come to the Camp Nou for the presentation of Robert Lewandowski. “Thanks, Pini!” Juan Laporta called into the microphone in English. “Brother,” added the 60-year-old. Lewandowski advisor Pini Zahavi is said to have earned ten million euros from the deal. He and Laporta already had a business relationship, the Barça president was the guest of honor at the wedding of one of Zahavi’s daughters.

Laporta explained last year that the club could only have kept Lionel Messi if television rights had been pledged. However, he was “not prepared to pledge the rights of the club to anyone. Our institution is above everything, even the best player in the world.” Exactly a year after Messi’s tearful farewell, Barcelona introduced Lewandowski. Financed with the sale of TV rights. A slap in the face for Barça’s icon. But also for the club. Barring a miracle cure for Barcelona, ​​the sell-off funds will be lacking for years to come.