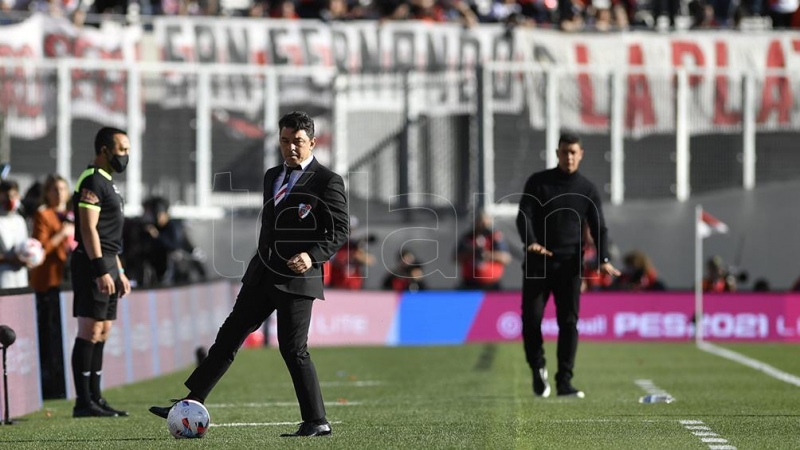 The River coach will have two regular starters, Fabrizio Angileri and Enzo Prez, available to play on Sunday against Estudiantes in La Plata for date 19 of the Professional Football League (LPF).

The midfielder fulfilled the suspension date due to the accumulation of yellow cards, while the full-back had already been discharged due to a tear and this week he will get ready from the physical and in the work with the ball after being out of the concentrates last weekend of week.

El Mueco must decide who will leave the team for these returns after the good performances that the possible changes have been having: Robert Rojas on the right side and Milton Casco on the left and Bruno Zuculini and Enzo Fernndez in the steering wheel area.

Rojas, one of the names in analysis to leave the ownership before “Pincha”. Photo: Laura Lescano

Casco has been occupying both full-backs with great regularity since the beginning of the season and Rojas surprised the coach in the position of the full-back, where he tends to play more often in his Paraguayan national team than with the Millionaire.

The return of Prez forces Gallardo to define if he keeps Enzo Fernndez -of very good games since Nicols De la Cruz was injured- or if he leans towards Zuculini, one of the figures in the victory against Argentinos on Sunday and author of a great goal.

In addition, there are chances that Braian Romero will return to the starting team, who lost his place before the superclassic and then had to leave due to a tear. His good income and his goals could return him to the team in place of Benjamin Rollheiser.

As for De la Cruz, the Uruguayan continues with differentiated tasks and they are going to test him between tomorrow and Friday to determine if they remove the anticoagulant medication that he is taking due to the thrombosis in his left foot and that a couple of games ago he does not let him play.

With this outlook, the squad today had a rest and tomorrow they train at the Ezeiza campus to prepare for Sunday’s match at 8:00 p.m. against Pincha, in search of the ninth consecutive victory in the tournament.

River, who did not lose again after being eliminated in the Libertadores, takes 9 points ahead of his escort Talleres de Crdoba in the standings, 11 to the third Vlez and Lans, and 12 to Boca, with seven to go dates so that he can be crowned champion.