Thirty years since Higuita changed the game of football 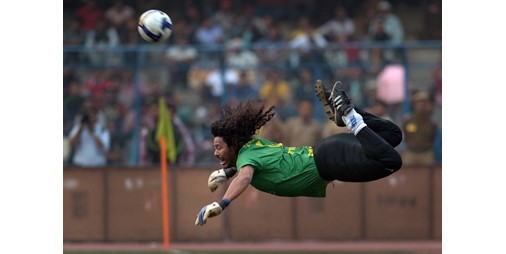 But until FIFA changed the back-pass rule thirty years ago, goalkeepers rarely used their feet to participate in building play from behind, other than shooting them the farthest on the field. They were taking their time, and more, to throw the ball.

“Great footballers like Pele and (Diego) Maradona… (they were) good players, but they haven’t changed any FIFA rule,” Higuita told AFP in a video call.

In Colombia, the decision to prevent guards from taking a back pass with their own hands is known as the “Higuita Rule”.

The world football governing body decided to act after the 1990 World Cup in Italy, after harsh criticism of the intensity of boring matches, which resulted in a low scoring rate of 2.2 goals per game.

Higuita considers that he paved the way for changing the law, during his participation in that World Cup.

FIFA imposed a back-pass ban at the next Olympic Games in June and July 1992, in a decision that confounded defense lines and goalkeepers.

“FIFA put an end to something that was horrible, in the 1990 World Cup almost all the teams were passing back, towards the goalkeeper,” historian Luciano Vernitsky told AFP.

In that edition, goalkeepers such as Argentine Sergio Goicoechea, Costa Rican Luis Gabilo Conejo and Italian Walter Zinga “kept the ball in their hands for a long time”, according to the Argentine.

Higuita stood out, not only because of his hairstyle or his awkward bouncing, but also for his courage when the ball was at his feet, and his ability to create offensive situations with his passes.

But not all his attitudes were rosy, as it cost his team dearly in the end.

In the round of 16, Higuita lost the ball out of his box to veteran Cameroonian Roger Milla, when he was trying to dribble the distinguished striker in the extended time.

Milla sprinted with the ball, scoring the winning goal and eliminating Colombia. His celebratory dance after scoring his two goals during the 2-1 victory became a landmark in the historical scenes of the World Cup.

– “Ignorant” guards – Higuita, nicknamed “El Loco” (The Crazy), was in charge of penalty kicks and free kicks, scoring 43 goals in his career.

“(Football) is faster now, there is more movement, and every day the goalkeeper has to work more on the movement of his feet to give something extra to the team,” said Higuita, who is absolutely convinced he caused the change in the law.

While Vernitsky acknowledges the singularity of Higuita, he opposes this theory, “The law did not change because of Higuita, but because of the rest of the guards who differed from it.”

Many goalkeepers, such as Spaniard Andoni Subisarreta, were against the new rule, telling El Pais newspaper in 1992 that it would “limit the goalkeeper”.

Higuita smiles mischievously when he recalls how the “ignorant” guards struggled to fit in with Al Qaeda.

Santiago Canesares, who played for Spain in 1992, finally spoke about how the back pass was bothering him. “It was a surprise to us,” he told the IOC website. “We didn’t know it would become a part of our lives.”

The impact was immediate at the next World Cup in 1994 in the United States, when the scoring rate rose to 2.7 goals per game, the highest since 1970.

“It’s the best rule change in the last 40 years,” said Wernitzky. “It made football more dynamic.”

Regardless of whether or not he caused the new rule, Higuita supports other measures that contribute to less time wasted, for example stopping the clock when the ball is out of play, similar to basketball.

“There is a lot of talk about introducing ‘real time’ like basketball, and that’s not a bad idea,” he said.