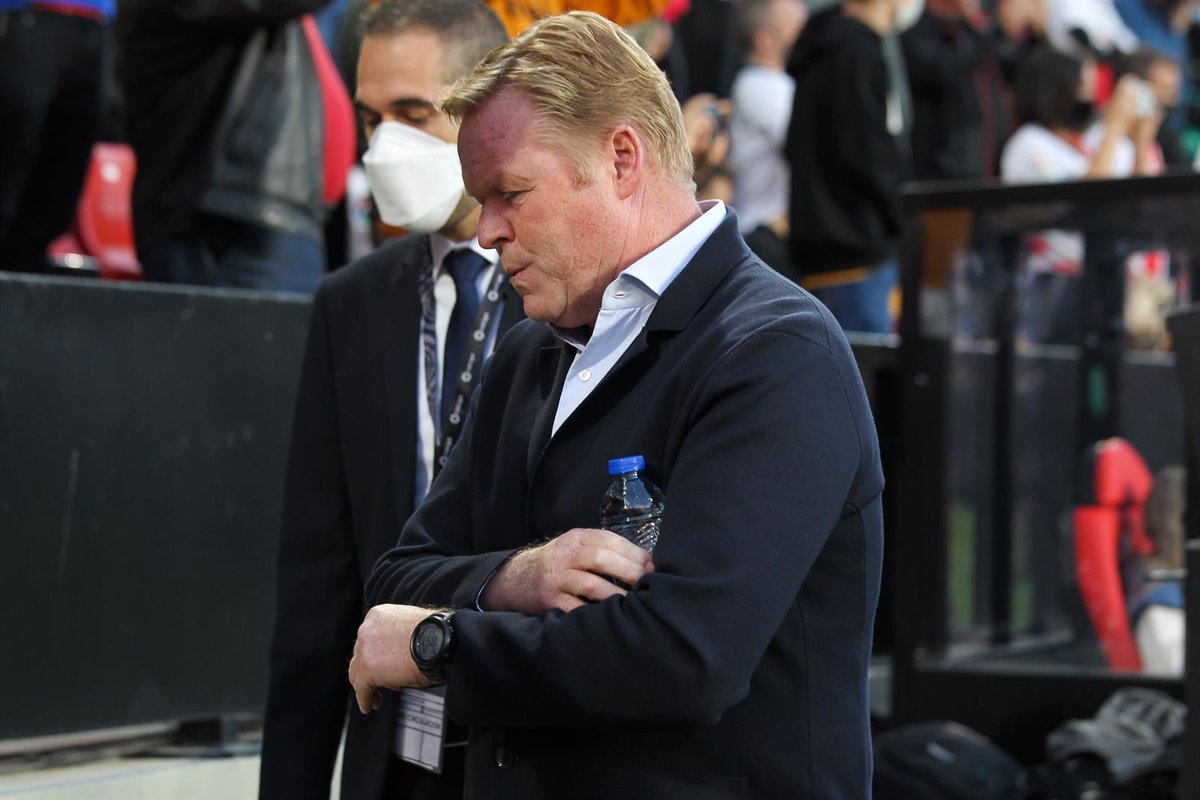 The Dutch coach Ronald Koeman has stopped directing FC Barcelona after the defeat against Rayo Vallecano (1-0), in the eleventh day of the Santander League, as reported at dawn this Thursday by the Blaugrana club that ends this way to the journey of a little more than a year of the hero of the first European Cup of the entity.

“FC Barcelona has dismissed Ronald Koeman tonight as coach of the first team. The president of the club, Joan Laporta, has informed him after the defeat against Rayo Vallecano. Ronald Koeman will say goodbye to the squad this Thursday at the Ciudad Deportiva FC Barcelona would like to thank you for the services provided to the entity and wishes you good luck in life and in your professional career, “the club reported.

The former player arrived at Barça in August 2020 as a solution after the debacle five days earlier in the quarterfinals of the Champions League against Bayern Munich and the remembered 2-8 that opened an institutional and sports crisis. Josep Maria Bartomeu, who in mid-January of that year had entrusted the direction to Quique Setién after dismissing Ernesto Valverde, also dismissed the Cantabrian and opted for Koeman, who found himself in a complicated situation with Leo Messi’s burofax asking to leave the club.

“Everyone knows that Barça is my home, I will have the opportunity to coach a team as big as this one. It is a challenge, it is not easy to be in Barcelona because the maximum is always demanded. I like that, there is enough quality to be able to demand the maximum of results and titles “, he affirmed the day of his presentation and after signing for two seasons.

Koeman was in charge of ending the stage as Blaugranas of key figures such as Luis Suárez and Ivan Rakitic, and finally he could count on Messi for the challenge of his first campaign, which did not start in the best possible way either, moving away more than a dozen very soon. points of the fight for LaLiga Santander, although later his improvement would allow him to re-engage.

Irregular in their football, started with a 4-3-3 and then sometimes changed to 3-5-2, Barça came back in the domestic tournament, while in the Champions League they were eliminated in the second round against PSG, the winner. 1-4 at the Camp Nou in the first leg of the tie, and in the Copa del Rey he survived with agonizing goals to end up lifting the title, the only one in his time, with authority against an Athletic Club that had snatched the Spanish Super Cup from him. .

And while trying to fight for the League, Koeman also had to deal with his future on the bench after Joan Laporta’s victory in the presidential election. The Dutch coach was not the favorite of the new president, who gave him his confidence from the beginning, and managed to get Barça to the final days in a position to fight for the league title. In fact, he had the option of taking the lead, but he lost at the Camp Nou against Granada (1-2) and signed a bad final stretch that ended up leaving him third.

Despite this setback, the new president ended up extending his confidence in the Dutchman. “Koeman has shown what we already know, that he is a great professional. We had to find solutions to the small differences that we could have and has led us to the conclusion that Koeman is the best for Barça,” he said after confirming that he would meet a second year of contract that was surrounded by doubts.

However, the delicate financial situation of the club was another burden for the coach, who this time did lose Messi, and that on the last day of the market he was also left without Antoine Griezmann. The start of the season, despite the hopeful 4-2 against Real Sociedad, was not good either and the Champions League debut against Bayern and the 0-3 conceded brought to light “this is what there is”, a message that seemed penetrate very deep as a reflection of the template I had at that time.

Another resounding defeat against Benfica (3-0) already put his position in the trigger, but Laporta ratified him just before visiting the Metropolitan Wanda, where the Blaugrana team left another poor image, settled with defeat (2-0). The victories against Valencia and Dinamo Kiev seemed to give him air, scarce because the defeats in the Classical and in Vallecas ended his career.

Koeman, who leaves the Catalan team in ninth position in the League, six points behind the head, has led 14 games this season with all three of the Champions League, with a balance of five wins, three draws and six defeats, and in total He accumulated 39 victories, 12 draws and 16 defeats during his time on the Blaugrana bench. Very poor figures for FC Barcelona, ​​which is used to fighting for all the titles year after year and now must seek its third coach in less than two years to redirect its course. Xavi Hernández would be Laporta’s favorite.