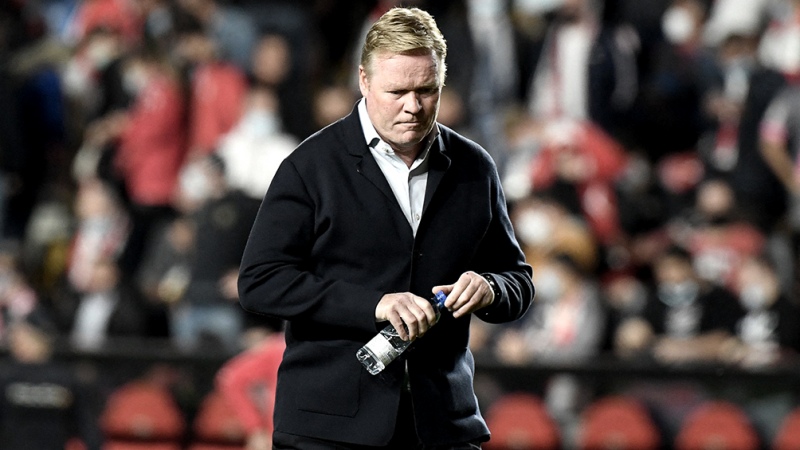 Koeman fired at the request of the Barcelona Board of Directors. Photo: archive

The Dutch Ronald Koeman was finally dismissed as Barcelona’s technical director after the defeat against Rayo Vallecano by 1 to 0 which was the last straw that broke a glass that was already overflowing with dissatisfaction for everyone “cul”, and the obvious first name that the president of the club, Joan Laporta, has at hand is Xavi Hernndez’s, but nevertheless his conviction in that aspect is not absolute and his main alternative is the River Plate coach, Marcelo Gallardo.

For now, from tomorrow, Sergi Barjun, currently in charge of Barcelona B, will take over the “blaugrana” squad on an interim basis, although this is a measure to get out of trouble while stinging issues are resolved that coincide more economically than in sports. such as the high compensation to be paid to Koeman (if there is no other agreement, it will amount to 12 million euros, but not to be paid now but at the end of the season in mid-2022).

But the other path that leads to higher expenditures in a club in poor economic conditions is the cost that the arrival of a new technical body will entail, which will arrive with all the obligations that have been and are due, since nowadays Barcelona is being left out. Champions League in the current group stage but, furthermore, it is not qualifying in the Spanish tournament for the 2022-2023 edition either.

The names that came to light in recent times to replace Koeman were, in addition to the two mentioned, those of the Spanish Robert Martinez, current coach of the Belgium national team, the also Dutch Erik Ten Hag, who leads Ajax from his country. , and the Italian Andrea Pirlo.

However, in recent days the popular Spanish sports program El Chiringuito conducted a survey in which, by all accounts, the winner was Xavi, but very close in the preferences of the voters obviously “culs” Gallardo remained, with all that he means. not be in the crosshairs of those fans compared to his competitors to succeed Koeman, who are all of European descent.

In fact, the considerations of the voters and the Spanish media in the general consideration pointed to Gallardo as “the best” of them all, including Xavi himself, because they consider that they do not have a real dimension of his qualities as a coach because he is directing Al Sadd, a team from a fourth-order league like Qatar’s.

And that is why some of the reasons arises why Laporta is not very convinced of adding him to the technical direction of a Xavi who knew how to win everything with Lionel Messi as the side in the today more missed than ever good times of that team led by Josep Guardiola .

But that is not the main reason, but there are also two others that put an obstacle to Xavi’s wishes to stay in that position, and the main one is that in the not too distant elections that enshrined Laporta’s return to the power in Barcelona, ​​Al Sadd’s technician campaigned from Qatar in support of one of his opponents, Vctor Font.

And finally, Xavi had until this year a clause in his contract with the Qatari entity by which he could automatically terminate his contract only if he was summoned by Barcelona, ​​but when he was recently renewed until 2023 that section was eliminated and now his separation is already over. It would be much more problematic, since if something could not help Barcelona, ​​it would be financially, if the former Barcelona footballer had to compensate his current employer.

On the other hand, Gallardo, who according to some Spanish media was polled in recent days by Laporta, something that the “Mueco” did not confirm but did not deny when he was consulted about it the previous week by the Argentine press, he would only have to wait two more months for to be able to finish his contract with River and then join Barcelona even with the probable marketing of arriving as a brand-new Argentine soccer champion, of the little he had to win at the head of Nez’s team in seven years in office.

And for the remainder of the year, Barcelona has six games ahead for the Spanish league and three for the Champions League, which in the case of the latter competition can lead to a rapid elimination of the tournament in the first phase, something unthinkable for the team. “Barsa” of the last two decades.

For all this is that despite the fact that many believe that Gallardo should not take the “blaugrana” team at this time, the reality is that he would be very favored with that choice, since he has everything to win and very little to lose, because whatever achievement he achieves, however minimal, such as qualifying for the Champions League 2022-2023, will be seen as a step forward.

But also, if something characterizes the “Mueco” is the intensity of his work, since his own managers often confirm that in River “you train as you play”, and that is precisely what Barcelona fans demand of the team every time they have opportunities to speak out publicly.

In addition, Barcelona has a good team, beyond the dispora that dragged even Lionel Messi himself. But that Rosario voted him for Gallardo in the last election for best technician in the world is not a minor fact and does not escape the eyes of the “blaugrana” fans, where everything that has to do with “Lo” is respected and loved as if it were himself.

And if not, it only remains to see the affection that the Barcelona fans dispense to Sergio Agero, surely more for being a friend of Messi than for his contribution to the team, where he could only play a handful of minutes and just today was a starter against Rayo Vallecano supported by the discount goal that he scored last weekend against none other than Real Madrid.

Perhaps times and contingencies will guide Gallardo, even considered by some Argentine colleagues in Spain as “a better technician than Diego Simeone”, to get to put on the coach of Barcelona as another Rosario like Messi once did in the 2013-2014 season, the “Tata” Gerardo Martino.