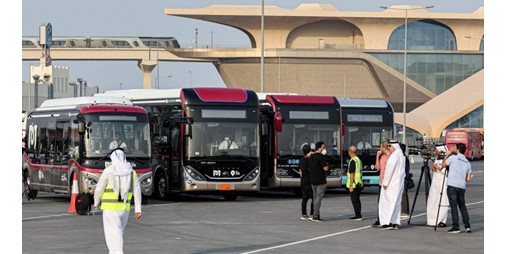 The Qatar Supreme Committee for Delivery and Legacy revealed that ticket sales for the FIFA World Cup Qatar 2022 reached two million and 450 thousand tickets, about three months before the start of the first edition of the World Cup in the Arab world and the Middle East.

The committee stated in a statement on its official website that the International Football Association (FIFA) announced the sale of two million and 450 thousand tickets, so that the list of the most receiving tickets for the World Cup was issued by fans from Qatar, the United States of America, England, Saudi Arabia, Mexico, the Emirates, France, Argentina, Brazil and Germany.

The statement, quoting the official FIFA website, added that during the last sales period, which extended between July 5 and August 16, according to first-come-first-served basis, a total of 520,532 tickets were sold from the FIFA ticket website.

He stated that most of those tickets were for the group stage matches, such as the match between Cameroon against Brazil, Brazil against Serbia, Portugal against Uruguay, Costa Rica against Germany, and Australia against Denmark.

He pointed out that fans residing in Qatar, Saudi Arabia, the United States, Mexico, the Emirates, England, Argentina, Brazil, Wales and Australia were able to top the digital queues and secure the largest number of tickets.

He cautioned that FIFA will announce the last-minute sales phase in late September, according to the first-come-first-served purchase, whereby the fan will receive tickets immediately after paying their value. Sales will also start at ticket distribution outlets in Doha after the launch of the last-minute sales phase that will continue until the end of the tournament.

The World Cup will start on November 20, with the opening match between Qatar and Ecuador at Al Bayt Stadium, a day earlier than previously scheduled, after the International Football Association (FIFA) confirmed last (Thursday) that the start date was brought forward by one day, to ensure the continuation of the ancient tradition of Organizing the opening ceremony prior to the opening match in which one of the two sides is the host country team or the title holder.

The tournament will witness 64 matches hosted by 8 stadiums throughout the World Cup, while the curtain will fall on the competitions on December 18 at Lusail Stadium, the largest stadium in the World Cup, which can accommodate 80,000 fans.