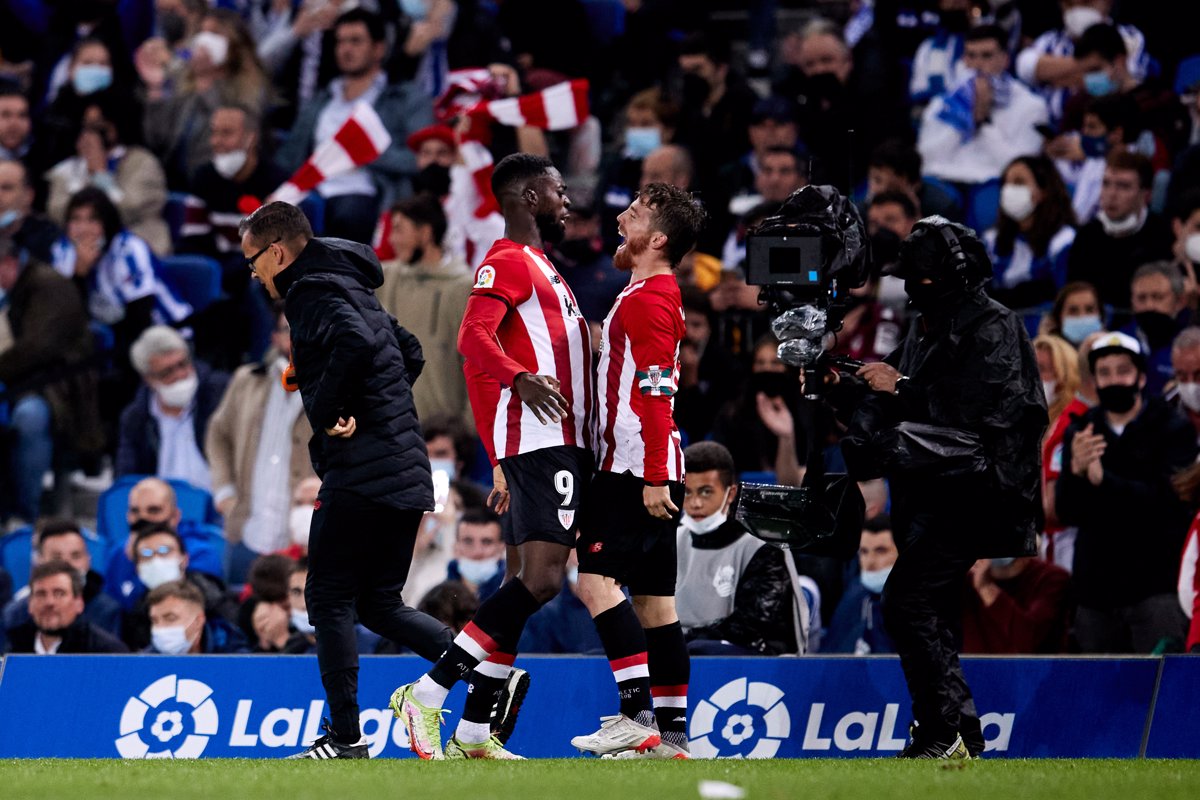 Real Sociedad continues as the leader in the classification of LaLiga Santander 2021-2022 despite drawing a goal this Sunday in the Basque derby against Athletic Club due to a last goal by Iker Muniain, while Getafe was finally able to savor his first victories thanks to Enes Unal and Cádiz saved in 93 a point against Mallorca, in matches corresponding to the twelfth day of the championship.

The always exciting Basque derby closed on Sunday at the Reale Arena, with Real Sociedad defending its leadership after the victories of Real Madrid and Sevilla, a condition that it maintains by one point, although with the bitterness of losing the victory in the last breath due to an error by Alex Remiro and when the ‘Lions’ played with ten.

The crash had two distinct parts. The first left a competitive match in the rain in San Sebastián, without too many occasions or a clear dominator, and with prominence for Alexander Isak and Iñaki Williams, who enjoyed the best chances.

The Athletic Club striker had the first as soon as the derby started, but Aritz Elustondo miraculously crossed, although the ‘9’ claimed a penalty that neither the referee nor the VAR considered. The center-back and the attacker would fight another similar duel with the same winner in the final stretch of the first even act.

For his part, the Swedish footballer showed his current importance in the Real, greater with the absence of Mikel Oyarzabal. The international was the one that brought the most danger for Imanol Alguacial’s men, but he ran into two good hands from Unai Simón that avoided the lead on the scoreboard for the locals.

Instead, the duel got more out of control in the second half where a more open match could be seen. Remiro made a great start stop to a header from Raúl García to avoid the 0-1 and the first goal would arrive before the first quarter of an hour. Merino was knocked down in the area by Íñigo Martínez and Isak did not forgive from eleven meters to bring the fun to the stands.

From there, the clash was finally opened and Remiro was once again the protagonist with another great intervention against Berenguer that held the advantage of Real Sociedad. The expulsion of Íñigo Martínez in the final minutes seems that it would help the locals, but a somewhat unnecessary foul allowed Muniain to tie in the extension, with some collaboration in the erratic clearance of the goalkeeper ‘txuri-urdin’, who fit fatally his first league goal at the Reale Arena.

UNAL LEADS GETAFE AND MALLORCA SUFFERS ANOTHER SETTLEMENT IN THE DISCOUNT

On the other hand, the Sunday day left the first win of the season for Getafe, which added three vital points led by Enes Unal to strengthen its desire for survival by beating Espanyol 2-1 who still cannot find their best away game .

Quique Sánchez Flores’ team knew what was at stake and with a new eleven with the entry of Koffi and Darío Poveda, they dominated an opponent who grabbed Diego López to maintain the 0-0. However, the veteran Galician goalkeeper could not stop the great Chilean from Enes Unal in the 31st minute, a joy that, on the other hand, did not last long since Sergi Gómez equalized on a corner kick after collecting a shot from Cabrera’s crossbar.

Those of Vicente Moreno reacted after the break and were the ones who brought the most danger in the second half, although they missed the ‘tusk’ that Raúl de Tomás gives them, sanctioned for this match. Getafe could not command, but it was he who found the prize when he was worst, thanks again to his Turkish striker who did not forgive a fumble in the area. With the 2-1, the locals endured the visitor’s final siege to confirm that they are improving and stay three points away from salvation.

Finally, in the Nuevo Mirandilla, the direct duel between Cádiz and Mallorca ended with a one-goal draw, with the ‘vermilion’ team once again letting their loot escape in injury time as happened in Mestalla, at the Reale Arena or at home against Osasuna.

Luis García Plaza’s team started better and enjoyed the best chances, with a shot at the post included by Salva Sevilla, until Baba put him ahead on the scoreboard at the edge of half an hour into the game. The locals reacted and went for a draw that Sobrino brushed against, who ran into Reina and the crossbar.

In the second half, Mallorca once again had good options to make it 0-2 before the game experienced its most controversial move with the expulsion of Iza canceled by the VAR because in a previous action there had been a lack of Baba.

The final stretch was marked by the expulsions of García Plaza and Sedlar and the penalty to ‘Choco’ Lozano that Negredo did not forgive in 93 to secure a point that provisionally removes Cádiz from relegation with 9 points, while Mallorca remains with 14.