From Wembley to the Butterflies, 4 months of blue triumphs 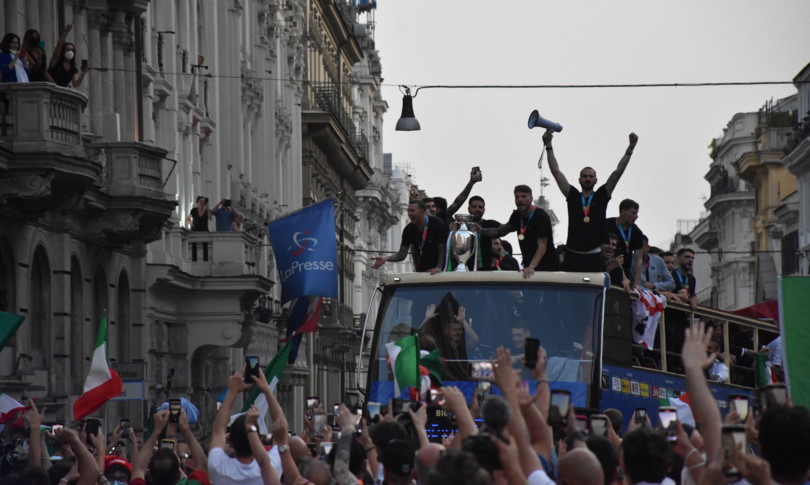 Those who had been three have now become four. Are the four magical months of Italian sport. Four months of successes, of triumphs, of unforgettable emotions, of legendary feats that have brought the Italy of sport to the top of the world in many sports, from football to athletics, from softball to American football, from swimming to tennis, from gymnastics artistic and rhythmic cycling through volleyball.

Olympics and Paralympics, more and more colored in blue, have made millions of Italians connected with Japan glued to the televisions: in normal situations many fans would have flown to Tokyo but the coronavirus pandemic has also prevented us from supporting our athletes and our athletes closely.

The legendary Olympics with 40 medals won, never so many in history, the superlative Paralympics where there were 69 podiums, the European football title in the ‘temple’ of Wembley beating England on penalties, the two continental volleyball titles with addition of the historic world of men’s volleyball under 21, were some of the most salient moments.

The magical summer of Italian sport began on 3 July with the conquest of the European title of the blue softball. On the Friulian diamond of Castions di Strada the pink movement of the Italian ‘beat and run’ had beaten Holland 9 to 5, raising the European crown for the twelfth time.

Eight days later, Sunday 11, under the eyes of the President of the Republic, Sergio Mattarella, Roberto Mancini’s Azzurri had beaten England on penalties (2-1). On the grass of Wembley, the British took the lead with Show, then a tie by Leonardo Bonucci and at the end the ‘lottery’ of penalties with the goalkeeper Gianluigi Donnarumma great protagonist.

Attending the final of the European football championship, postponed from the summer of 2020 due to the coronavirus pandemic, there was also Matteo Berrettini who a few hours earlier in the Euro2020 final, at the Wimbledon center, had surrendered in four sets to the world number one of tennis Novak Djokovic.

It had never happened in 134 editions that an Italian reached the final of the prestigious London tournament. The days go by and the expectations around Italian sport are growing day by day.

The long-awaited Olympics will open in Tokyo on 23 July, the first in history without spectators present in the arenas and stadiums. Tokyo 2020 should have been held twelve months earlier but Covid-19 had forced the first postponement of a five-circle event: it had never happened since 1896 except for war reasons.

With a record expedition – 384 qualified athletes in 36 sports and almost gender equality (197 men and 187 women) – Italy Team flew with many dreams to the land of the Rising Sun closed to the rest of the world being in a state of emergency for health reasons.

The notes of the Mameli Hymn have been heard ten times. The booty of Italy was also enriched by ten silvers and twenty bronzes. There was a legendary, incredible, memorable day: the ‘bestial Sunday’ of August 1st.

Tokyo Olympic Stadium, the apotheosis occurred in eleven minutes that no one had ever dreamed of. First Gianmarco Tamberi wins gold in the five-year high jump the painful renunciation of the Rio Games and shortly after an Italian, Marcell Jacobs, wins the 100 meters at the Olympics printing the stellar time of 9 ”80, European record.

Athletics will give another three golds, two from the march with Antonella Palmisano and Massimo Stano, and the one signed by the four 4×100 musketeers, Patta, Jacobs, Desalu and Tortu. Also engaged in team pursuit in track cycling: gold for Francesco Lamon, Simone Consonni, Jonathan Milan and Filippo Ganna.

In the farewell Olympics of Federica Pellegrini, the ‘Divine’ of swimming, and of the six swimming medals, the first gold of a mixed couple arrived, the one in sailing (Nacra 17) with Ruggero Tita and Caterina Banti. On the day of Ferragosto, Italian women’s tennis returned to the apex of the world.

Thanks to Camila Giorgi who in Montreal beats the Czech Karolína Plísková 6-3, 7-5, becoming the second Italian ever to win a WTA1000 tournament after Flavia Pennetta.

A couple of weeks pass and the spotlight is still on the capital of Japan. At the Paralympics Italy plays a leading role, finishing the medal table in ninth place thanks to its 69 medals, 14 of them gold.

It was the edition of the great confirmation of the immense Bebe Vio in fencing, of the many swimmers capable of establishing themselves at world level but also of another feat, the hat-trick in the 100 meters in athletics signed by Ambra Sabatini (complete with world record of 14 ”11), Martina Caironi and Monica Graziana Contrafatto, three girls with one leg amputated and with as many different life stories.

With the Paralympics nearing its conclusion, the European women’s volleyball title has arrived. Paola Egonu and her companions made up for Serbia’s interests by beating it in their ‘den’, at the Stark Arena in Belgrade for 3 to 1. For Italvolley in pink the third magical continental title.

Remaining in volleyball on 19 September at the end of a hard-fought match against Slovenia won by 3 to 2, Fefè De Giorgi’s men’s Italy put the seventh European title on the board. September is confirmed as the month of volleyball. In Mexico, the Italian under 18 women’s national team won silver by being beaten 3-0 by Russia.

September was also the month of great cycling. At the European road championships in Trento there are four Italian gold medals, Sonny Colbrelli in the road test, Silvia Zanardi in the under 23 road race, Vittoria Guazzini in the under 23 time trial and in the mixed time trial.

Filippo Ganna, Olympic gold medalist with the quartet, is silver at the continental event but at the World Championships in Flanders he scores and confirms himself as the fastest time trial on planet earth. Small brackets in September for baseball with Italy bronze at the European Championships in Piedmont.

The 9 September Gianmarco Tamberi wins the ‘Weltklasse’ in Zurich with 2.34 and becomes the first Italian in history to win the Diamond League. On the 18th it is Filippo Tortu who amazes everyone: in the distant Nairobi he prints 20 “11 on 200 meters and becomes the second fastest Italian ever on 200 meters after Pietro Mennea’s 19” 72 dated September 1979. On 26 September in Mantua the Motocross Italy becomes the strongest team in the world (it happened in 1999 and 2002) by winning the ‘Nations Trophy’.

To accomplish the feat, Antonio Cairoli, Alessandro Lupino and Mattia Guadagnini. On October 3, another magical Sunday. Colbrelli imposes himself in the sprint in the legendary ‘Paris-Roubaix’. Sonny is the 14th Italian to conquer the race nicknamed ‘the Hell of the North’. The last Italian success was 22 years ago with Andrea Tafi.

In Sofia, in the meantime, Jannik Sinner won the ATP 250 in Sofia for the second consecutive year. The blue player, who had said ‘no’ at the Tokyo Olympics, won in two sets in the final (6-3, 6-4), the Frenchman Gael Monfils. In the evening, volleyball is the icing on the cake.

After losing four finals, Italy under 21 became world champion. In Cagliari the Azzurri beat Russia’s resistance with a sharp 3 to 1. October is the month of first artistic and then rhythmic gymnastics with Italy increasingly spinning in history and track cycling.

In Kitakyushu, in the land of the Rising Sun, Nicola Bartolini is the free body world champion – the first Italian ever in this specialty – ahead of the Japanese Kazuki Minami by just 33 thousandths of a point.

Asia D’Amato’s vaulting silver was also historic: no blue had ever won a world medal in this specialty. In men’s artistic gymnastics Marco Lodadio confirms himself as vice-champion of the world in the rings and, in the same apparatus, Salvatore Maresca hits the bronze.

In rhythmic gymnastics Italy returns from Japan with five medals. Sofia Raffaeli, making her debut at the senior World Championships, won bronze in the circle becoming the first blue individualist to get on the podium in this specialty.

The icing on the cake is gold with hoops and clubs. The Butterflies trained by Emanuela Maccarani rise to the top of the world ahead of Russia and Japan. The last acute of the Butterflies, always on the final day of the 38th edition, was the silver medal for the 5 balls.

At the track cycling world championship in Roubaix the Italian team won ten medals, four of which gold. First world title in career for Elia Viviani: the 2016 Olympic gold medal in the Omnium and standard bearer in Tokyo 2020, he becomes champion in the Elimination. On the roof of the world also the Italy of the team pursuit (Liam Bertazzo, Simone Consonni, Filippo Ganna, Jonathan Milan and Francesco Lamon), Letizia Paternoster in the Elimination and Martina Fidanza in the Scratch.

In tennis Sinner wins the ATP 250 in Antwerp. The blue, seeded number 1 of the tournament, beats Diego Schwartzman in the final and wins his fifth ATP title, the fourth in the same season: the youngest Italian tennis player to have won at least five ATP tournaments in his career. American football also shines and triumphs. After 34 long years, Italy dominated the game that took place in Malmoe and won the third title in history by beating Sweden 41 to 14.

First commitments also for winter sports. The high pitches at the beginning of the season, which will be the highlight of the winter Olympic Games in Beijing (4-20 February), come from the ice, in particular from the short track. Arianna Fontana confirms herself as the ‘Queen’ of the short run.

The ” blond arrow ‘of Valtellina, Olympic champion since Turin 2006, in this start of the season of the Cup won the 500 meters in the Nagoya stage that saw an Italian return to success after 14 years, Yuri Confortola in 1500.