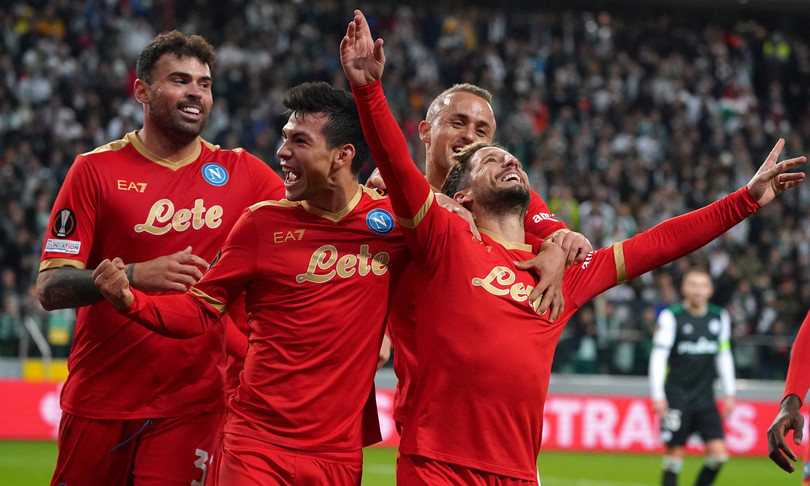 Napoli wins in comeback at Legia Warsaw and takes the lead in Group C of the Europa League. It ends 4-1 on Polish soil thanks to the penalties of Zielinski and Mertens as well as the seals of Lozano and Ounas, which make Emreli’s initial advantage in vain.

Spalletti’s team flies to 7 points, leaving Legia behind by a length, waiting for the Leicester match which, winning against Spartak Moscow, would reach it in first position.

Uphill departure for the Neapolitans, forced to go under after just ten minutes from the kick-off: Mladenovic runs to the left and mock Anguissa with a feint, then offering Emreli a golden ball to push inside for 1-0 . The Azzurri are not there and react immediately, touching the equalizer in the 17 ‘with Zielinski, who first breaks the crossbar with his right foot, then tries to left-handed on the rejected one by putting up a little.

At the beginning of the shoot, after just 50 seconds, the Legia hits a sensational post with Ribeiro, then at 51 ‘comes the episode that brings everything back into balance. Josuè with a shoulder spreads Zielinski in the area, the referee whistles the penalty and the Polish midfielder makes 1-1 from the spot.

The local number 27 will still be a negative protagonist in the 75th minute, when he provokes another penalty foul against Politano, giving Napoli a great opportunity to overturn the result.

This time from 11 meters goes the newly entered Mertens (Zielinski replaced by the Belgian), who with a touch below achieves the 2-1 Neapolitan. A few moments pass and Lozano closes it in advance at 3-1, served by a very altruistic touch from Petagna who frees him for a comfortable tap-in with an empty net. At 90 ‘Ounas also participates in the blue party, who thanks to a good play signs the final 4-1.