Juan Manuel Fangio will have his tribute in Balcarce 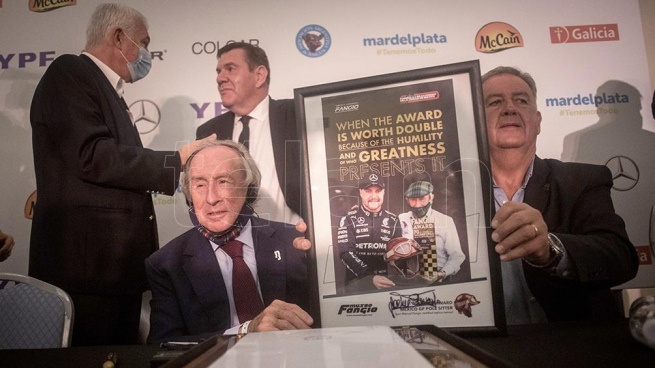 70 years after obtaining the first of his five titles in the highest category of motorsport, the first tribute to Juan Manuel Fangio began in Mar del Plata with the presence of the three-time world champion of Formula 1, the Scottish Jackie Stewart, who assured that the quintuple “is still alive” and that for him was a “great example of humility and perseverance.”

This Wednesday the tribute to Juan Manuel Fangio will conclude in his hometown, with the transfer of his remains from the Balcarce cemetery to the mausoleum located on the ground floor of the Fangio Museum, in the same city, and previously a caravan will be made that will pass through the historical places that were for the fivefold milestones of his life

“It is a great honor to be in Argentina for a man who was the best racing driver in all history, and he was someone I always tried to resemble, because he did his successful business in style, with an exemplary pattern of conduct both inside and outside. from the slopes, “said Stewart in a crowded room at the Provincial Hotel in Mar del Plata,

Stewart, considered one of the 10 best drivers in history, with 99 Grand Prix run, in which he achieved 27 victories, 17 pole positions and 43 podiums, between 1965 and 1973, stressed that the Argentines “are very lucky to have had a man like Juan, who has represented them as he did “.

“I don’t think the world has seen anything like Juan Manuel Fangio and that is why I am happy to be here today and to be part of this great movement,” added Stewart on his second visit to the country after being for burial in 1995.

“I have learned a lot from ‘Gran’ Fangio, and having accompanied him at that time was one of the most important things I did in my life, and the world recognizes his style, his humility, and Argentines should be proud of having had such countryman to a fantastic man, “Stewart stressed.

“I can guarantee you that the rest of the world feels the same as me. Bravo for Fangio!”, Added the Scottish veteran, who received from the municipal authorities of Mar del Plata and Balcarce the distinction of “Illustrious Guest”.

Photo: Diego Izquierdo.The Scotsman Jackie Stewart, 82, whose real names are John Young, was a three-time Formula 1 champion, in 1969 with Matra, and 1971/73 with Tyrrell, even as a 12-year-old boy he witnessed a Grand Prix of F1 and was shocked by the imposing Maserati driven by Juan Manuel Fangio.

It was 1966 and Jackie Stewart had won the Monaco Grand Prix with his BRM, and when he stops his machine in the pits, he turns off the engine, takes off his helmet and stays in the cockpit of his car and sees a man crouch down and he tells him in a finite voice: “you will be a great champion in the future”, and he could barely know that it was none other than Juan Manuel Fangio.

The day Fangio died, July 17, 1995, at the age of 85 (he was born on June 24, 1911), the Scotsman Stewart was playing golf in London and a man asked him if he could interrupt him, to which the former pilot Intuitive like few others, he sensed that something serious had happened, which he confirmed when he whispered in a trembling voice: “Fangio died”

Stewart left the place catapulted in search of his passport and a handbag and, after an odyssey of traveling almost 20 hours between waits and transfers from London to Buenos Aires, to then get on a small plane that was waiting for him on the Ezeiza runway. He was able to arrive in Balcarce two hours before the last goodbye, due to the admiration, gratitude and respect he felt for Fangio.

Stewart recognized him as the best pilot in history, someone who did things that other greats like him admitted as unique, magical and sublime.

A little over a month ago, Stewart received the pleasant news that his wish was going to come true, taking into account the decision of the members of the Foundation and the children of Fangio. They will build a vault in the museum so that Fangio’s coffin can be visited by anyone who wants to get closer to the temple of motorsport.

Despite his age and the inconveniences and risks that the Covid 19 pandemic brings, the Scotsman did not hesitate to confirm his presence in Balcarce in what will be the last trip of the maximum Argentine pilot in history to his final destination.

For his part, the super sports car designer from Casilde Horacio Pagani, founder of Pagani Automobili, commented that “the most remarkable thing about Fangio was not his triumph as an athlete, or his five championships, but his victory as a person.”

For the prolific constructor, without a doubt that the case of Fangio deserves the sentence that ‘”The man was more than the myth” and therefore “the respect and veneration that the other pilots have had for him speak of what he meant for him. everybody”.

Photo: Diego Izquierdo.Pagani, who through Fangio managed to enter the Lamborghini factory, later founded his own brand Pagani Automobili, from which the Zonda models (in honor of Fangio) and the Huayra came out, considered to be some of the best super sports cars in the world.

On Wednesday, at the Balcarce racetrack, there will be Oreste Berta, who was closely linked to Juan Manuel Fangio, to whom the Balcarceño entrusted the preparation of the Argentine Mission Torinos that played a great role in the 84 Hours of Nurburgring in 1969 It will be there when the silhouettes of the various cars that the quintuple manned are drawn on the track.

Oreste Santiago Antonio Berta, was born in Rafaela, Santa Fe province, on September 29, 1938, and is a designer, developer and integral builder of motors and competition cars, and founder of Oreste Berta SA in 1968.

In 1966 he was appointed director of the official team Industrias Káiser Argentina de Turismo Carretera, and IKA’s intention was to present its products in national motorsports, highlighting the jewel in the crown: the IKA Torino.

Under her leadership, Berta led IKA to win the 1967, 1969, 1970 and 1971 championships, and the runner-up in 1968. Engine preparation played an important role, in addition to the use of the Liebre-Torino prototypes ( designed and developed by Heriberto Pronello), as well as the Torino 380W, always with the good care of Berta.

In 1969, Berta joined the “Argentine Mission” that was going to participate in Le Marathon de la Route where the coach would show off his preparatory skills worldwide.

The team, led by Juan Manuel Fangio, had Berta as Technical Director and in charge of preparing the engines of the three Torinos that participated in the competition. He also carried a group of the best drivers in the country.