Rien Schuurhuis starts for the Vatican: The Pope’s cyclist 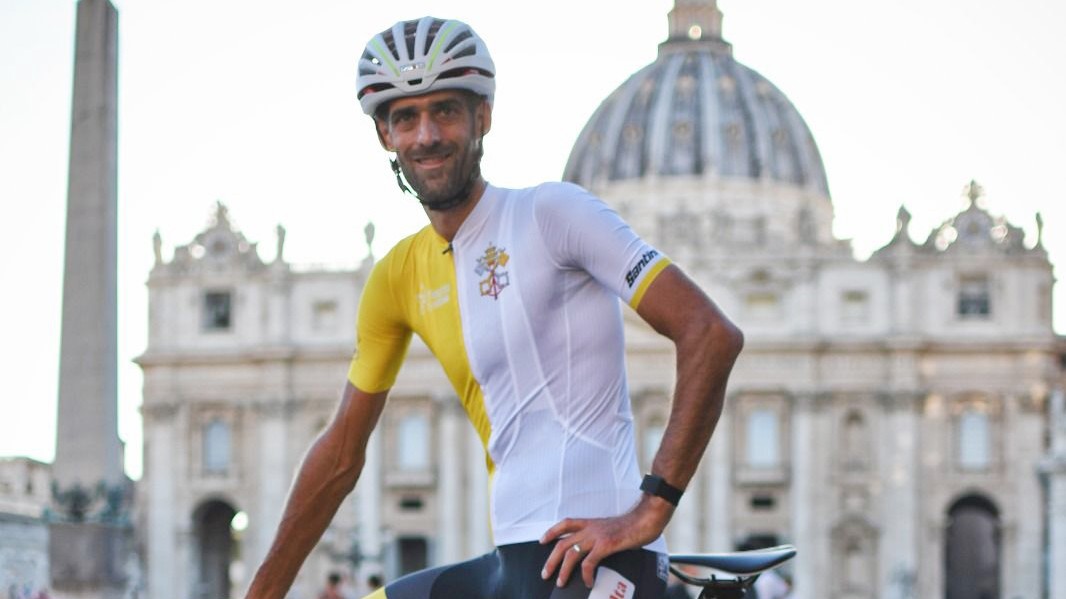 The people in the Vatican state are considered earthlings who lead a comparatively healthy life in the midst of the roaring and smoking metropolis of Rome. Half of the roughly 44-hectare enclave of the Vatican City State is green, smoking has been banned throughout the state since 2002 and there is a speed limit of 30 kilometers per hour. In order to do something for the physical fitness and the sense of community of the Vatican employees, an independent football championship was launched 50 years ago.

The games of the Vatican League take place in the Roman outskirts of Primavalle. The 16 teams compete against each other on a small field with four field players and a goalkeeper; this reduction is necessary because the teams cannot get enough players together. It was never enough for the Holy See to become a member of the International Olympic Committee or the football associations Fifa and Uefa, let alone take part in world and European championships, simply because there is no sports field in the Vatican. But what is not possible in football, to send a messenger from God’s representative on earth to the stage of international sport, is made possible by the regulations of cycling.

And so it is that Dutchman Rien Schuurhuis, 40, will actually wear the white and yellow colors of the Vatican this Sunday when the Australian coastal city of Wollongong hosts the 266.9-kilometer UCI Road World Championships will. Schuurhuis, born in Groningen, competes for the Athletica Vaticana, a sports organization founded in 2019. He is not the first athlete to start for the mini-state. Don Vincenzo Puccio, a Sicilian priest, finished second for the Holy See in the 2019 Messina marathon, in a time of 2 hours and 31 minutes. And Sara Carnicelli, 27, the daughter of a Vatican worker, was a guest athlete at the Mediterranean Games that year, where she finished ninth in the half marathon in Oran.

Actually, the Pope is better known for his love of football – but he has also discovered cycling for himself

But when Athletica Vaticana managed to be officially accepted into the umbrella organization UCI last year, the cheers of those responsible could certainly be heard well into the sacred silence of the confessionals in St. Peter’s Basilica. Considering “the smallness of the Vatican reality,” said an official statement in a delightfully euphemistic way, the UCI’s recognition is primarily aimed at promoting the practice of cycling as a communal sporting experience, “with a strong focus on the dimensions of service, gratification , Amateurism, Integration and Solidarity”.

Of course, these noble targets do not stand in the way of a professional organization of the Vatican cycling delegation. It will be led by Valerio Agnoli, 37, a former professional cyclist who pedaled for controversial teams Liquigas and Astana and made a name for himself as a water carrier for Vincenzo Nibali and Ivan Basso. “We are going to Australia as ambassadors of His Holiness,” said Agnoli, adding that Francis actually blessed her personally.

Actually, the Pope is better known for his love of football. “All we needed was a ball of rags to have fun and work miracles,” he says Gazzetta dello Sport reported on his ball-centric youth in Argentina. His nickname was “pata dura”, which means something like “clumsy legs”, so he always played the goalkeeper “so that I didn’t have to move”.

At an audience for the annual congress of the European Cycling Federation, Francis also revealed his love for cycling. Whoever listened to him got the feeling that she was in no way inferior to that of Don Camillo, that powerful and sly priest who loved to roll through the fictional town of Boscaccio on two wheels. Cycling, Francis said, highlights certain virtues, “such as perseverance, courage, integrity in following the rules, altruism and a sense of teamwork”.

For the Pope, doping is just “a shortcut that takes away dignity”

It hasn’t escaped him that, especially in cycling, the rules are often bent and broken with passion until the gendarmerie arrive to raid them. Doping, says Francis in an excellent definition, is more than fraud. Namely “a shortcut that takes dignity and tries to steal the spark that God has mysteriously given to certain people in a special or greater form”.

How big the spark that was given to Schuurhuis can perhaps be demonstrated on Sunday. So far he has appeared as a professional for the “Black Inc Cycling Team” and “Oliver’s Real Food” mainly as a participant in smaller races in Asia. Schuurhuis moved to Rome two years ago to prepare for what is now his biggest sporting challenge in Australia. He likes to start his daily training there on the busy boulevard Lungotevere along the Tiber. “I have to admit that this is one of the funnest parts of my training, also because of the reflexes I have to keep showing in the middle of the dense chaotic Roman traffic,” Schuurhuis told the Vatican newspaper The Osservatore Romano told.

One thought on “Rien Schuurhuis starts for the Vatican: The Pope’s cyclist”