Messi excites the National Team for the duel against Uruguay 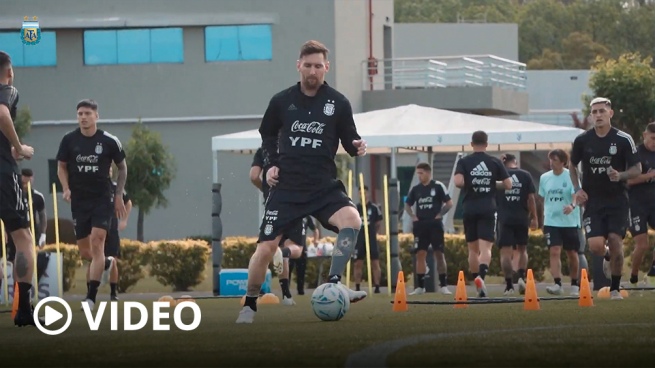 Messi excites the National Team for the duel against Uruguay

Lionel Messi wants to wear the captain’s belt of the Argentine national team from the very beginning of next Friday’s game against Uruguay, in Montevideo, and to show that he is in physical condition to do so after the doubts generated by his discomfort in the hamstring and knee of his left leg, he did all the afternoon training under the command of Lionel Scaloni alongside his teammates.

The day, which in the morning had the officialization of the disaffection of the forward of Fiorentina, from Italy, Nicolás González, who is still positive in the tests carried out for the contagion of coronavirus that was detected on October 26. , continued with the most demanding training of the four that the national team will develop before flying this Thursday at 6.15 pm to Montevideo.

This practice began at 4:00 p.m. with physical tasks in charge of Professor Luis Martín, who organized technical circuits with the ball, coordination and mobility actions.

For the second block of work Scaloni was already present, when the squad of 34 members after the confirmed loss of “Nico” González made tactical movements for 35 minutes, to close with definition exercises through short and medium distance shots .

For their part, goalkeepers Emiliano Martínez, Juan Musso, Franco Armani and the youth Federico Gomes Gerth practiced separately, as usual, under the supervision of the position coaches, Martín Tocalli and his assistant, Damián Albil.

The only footballer who for the third consecutive day trained differently because he continues to recover from the tear he suffered exactly 21 days ago in Paris Saint Germain was midfielder Leandro Paredes, who is ruled out to start playing against the Uruguayans, who will arrive at the meeting on Friday at 20 at the Campeón del Siglo stadium, in Peñarol, Montevideo, with eight significant casualties.

Among them are, for example, those of the scorer Edinson Cavani and the midfielders Federico Valverde and Giorgian De Arrascaeta, indispensable elements in the structure of the team of “Maestro” Oscar Tabárez, who after 15 years at the head of the “charrúa” team is receiving the first questions from some fans, which led to the immediate and fiery defense exercised by their managers.

Uruguay is fifth in the positions by goal difference, since it shares 16 points with Colombia, but if they lose with the Argentines on Friday and the same happens to the “coffee growers” when they visit Brazil this Thursday, then the current leader of these South American Qualifiers will be becoming the first South American classified for the Qatar 2022 World Cup.

The Argentine national team, his escort from which he is separated by six points (31 against 25) with six dates to play, lacks a little more to reach the World Cup event that will take place in Qatar between November 21 and December 18 of the year next.

After the match on Tuesday 16 for the fourteenth date, just in front of Brazil, at the San Juan del Bicentenario stadium, where Messi will be from the start, something that for Friday is not confirmed, and in case of not entering the start his place will be occupied by Paulo Dybala, the Qualifiers will have two more windows of double dates, the last ones, in the first quarter of 2022.

There, Argentina will visit Chile on Thursday, January 27 for the fifteenth day and will receive Colombia on Tuesday, February 1 for the sixteenth, while on the seventeenth it will return to be local with Venezuela on Thursday, March 24 and will close with the eighteenth and last the following Tuesday 29 in Ecuador, against Gustavo Alfaro’s team.

If Scaloni’s undefeated 25-game series continues, for the double-day in January and February Argentina could be securing its early ticket to the World Cup of unprecedented completion at the end of the year, due to the intense heat prevailing in Qatar during the months June and July, when ecumenical appointments usually take place.

Of course, for this Argentina must continue to add as much as possible to three points, and for this Scaloni will bet on a single variant confirmed for Friday, which is the entry of Guido Rodríguez by Paredes, and the doubt, nothing more and nothing less , regarding whether Messi will be from the start or will enter the complement, as he likes if he must play less than 90 minutes for physical reasons.

The formation for that meeting in the Uruguayan capital that will be witnessed by scouts from Juventus, from Italy, who intend to see the riverplatense forward Julián Álvarez in action (depends on Scaloni), would be the following: Emiliano Martínez; Nahuel Molina, Cristian Romero, Nicolás Otamendi and Marcos Acuña; Rodrigo De Paul, Guido Rodríguez and Giovani Lo Celso; Lionel Messi or Paulo Dybala; Lautaro Martínez and Ángel Di María.

The next steps of the selection will be given with a press conference that Scaloni will offer this Thursday at 11.30 in the AFA premises with a reduced capacity of journalists present, a final training session in Ezeiza starting at 4 p.m. and the aforementioned subsequent trip of 6.15 pm heading to Montevideo, for the last match as a visitor of the year on this long journey towards what is still distant today, in time and distance, Qatari illusion.