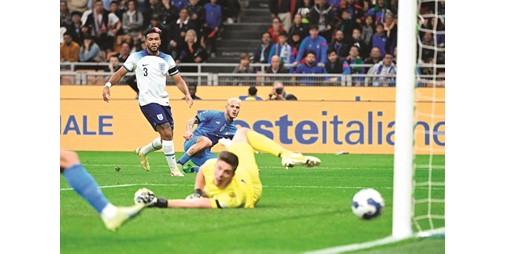 With names to say the least that are a far cry from the fame of stars like Ferenc Puskas, Hungary reclaimed something of its distant past by dropping Germany into its stronghold 1-0 in Group C that saw England relegated to the second tier of the European Nations League by losing to hosts Italy 0 -1.

Hungary, which has been absent from the World Cup since 1986 and eager to regain its past glories, entered the runner-up in 1938 and 1954, third in the 1964 European Cup and fourth in 1972, and won Olympic gold three times between 1952 and 1968, in addition to silver and bronze, to the fifth penultimate round and is at the fore. Group C, a point ahead of hosts Germany.

And with its third victory after beating England 1-0 at home and 4-0 among the “Three Lions” fans, Hungary strengthened its chances of reaching the semi-finals from a group that includes three world champions.

Tomorrow, the decision will be in the hands of Hungary in the event of a draw at home with its new runner-up Italy, which is two points behind, while the Wembley match between the two rivals England and Germany will be marginal because the latter lost any hope of qualifying for the semi-finals.

In Leipzig, where the Germans emerged victorious from their last 11 matches in their longest streak in one city, Hungary continued its impressive results and inflicted coach Hansi Flick’s men on England, who fell in front of them at home.

Hungary could have won its first victory over Germany in official competitions since the second round of the 1972 Munich Olympics (4-1), had Italy not succeeded in beating England in Milan thanks to Giacomo Rasbadori’s goal (68).

Hungary owes its third victory in this group and its lead in front of its new runner-up and next opponent, Italy, by two points, to Adam Chalay, who scored the only goal in the 17th minute.

In Milan, the Italians regained some of the smile they lost due to the failure to qualify for the World Cup for the second time in a row, by defeating the English, which caused coach Gareth Southgate’s men to drop to the second level.

Argentina and Brazil hit Honduras and Ghana with three

The star Lionel Messi scored a double and led Argentina to a 3-0 victory over Honduras in Miami, consolidating a beautiful series of 34 matches without losing, before his participation in the World Cup in Qatar at the end of the year.

The Argentine captain scored in the two halves, the first with the opening of his colleague Lautaro Martinis, and the second decisively the match.

Argentina will play their next match the day after tomorrow against Jamaica in New Jersey, and they have not lost in their last 34 matches. Its last loss is in the Copa America 2019 semi-finals.

Brazil also beat Ghana 3-0 in the French city of Le Havre in an international friendly match.

Tottenham striker Richarlison imposed himself as a star of the match by scoring a double (28 and 40) from two crucial passes to Paris Saint-Germain star Neymar, raising his score to 10 assists in 12 games in various competitions this season, with the net 11 times.