Hungary comes down to France from the cloud 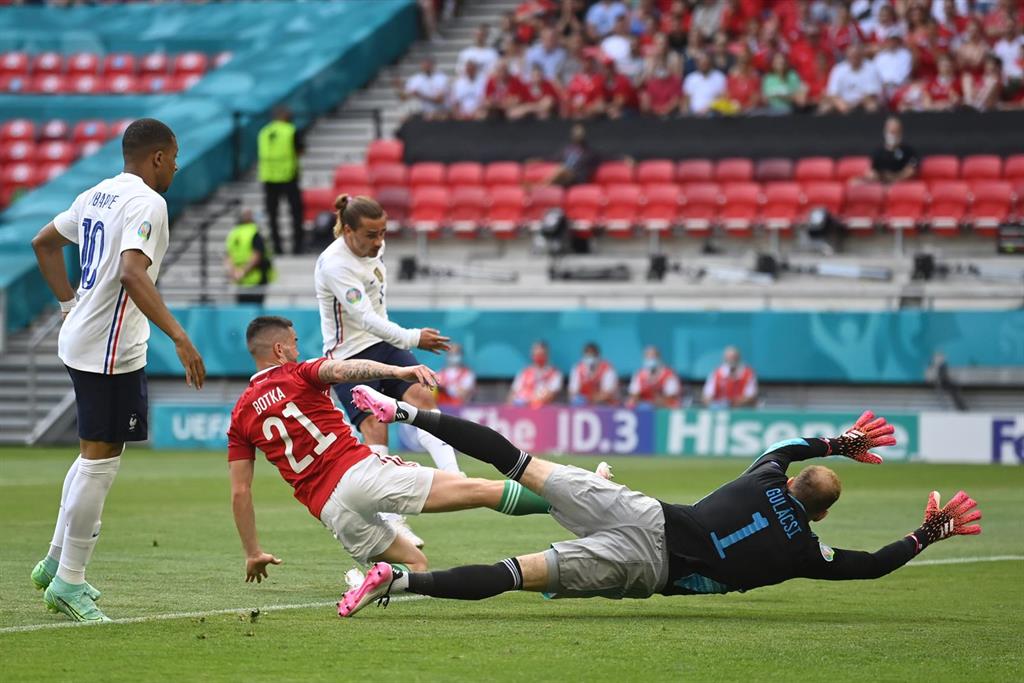 Hungary comes down to France from the cloud

Griezmann and Mbappé avoid the first defeat of the world champion

The French team was disappointed this Saturday in their match against Hungary after drawing (1-1) at the Puskas Arena in Budapest, in a duel that delayed their qualification for the second round of the Eurocup and that gives life to the locals in the dreaded ‘group of death’.

Didier Deschamps’ team deserved better luck but ran into the oldest football law: “He who forgives, pays.” And so it happened to the reigning world champion, who had up to five clear chances to take advantage in the first half and was lost to the locker room at rest time.

The ‘bleus’ monopolized the ball, the construction of the game and the opportunities with that scary trident just by naming it: Griezmann, Mbappé and Benzema. The one from Barça was the one who sent the first warning with a goal annulled for offside and the one from PSG replied after half an hour with another play to remove his hat.

Mbappé was the one who enabled Benzema a little later, on the verge of half an hour, with a sensational heel strike, but the Real Madrid striker – as if it were a moving penalty – failed to take advantage of the gift. In any case, the goal did not come but the control was absolute, adding even the potential of Kanté in the medullary, once again imperial.

However, Deschamps was not calm, he did not stop talking to his ‘second’ throughout the game and he knew that he could give the alternative to a Hungary that had done absolutely nothing so far if the goal did not come soon although everything gave him the back to home. Their attacking reference Adam Slazai retired due to injury after 26 minutes.

But none of that mattered to the Italian-led Marco Rossi team, which found oil in an isolated action during the extension of the first act. Fiola did not let go toe-to-toe with Lloris after beating Varane and scored a goal causing ecstasy at the stadium in the Hungarian capital, where there is neither a security measure nor the obligation to wear a mask outside.

Some 67,000 spectators saw their team, despite being subdued, left with a huge loot at halftime. France reacted even if it did not have to touch its scheme much. Ousmane Dembélé was the most relevant change and the culé player ended up being the most outstanding, although his bad fortune forced him to retire due to muscular discomfort a few minutes from the end.

Dembélé hit the post on another warning for Hungary until Griezmann, in a play started by a Lloris serve, achieved the sought-after equalizer (minute 66). Before he reached the former Atlético, Mbappé fought for the leather and his pass backwards was tamed by Orbán leaving Griezmann to shoot a few meters from the goal line.

From here the siege continued with Gulacsi making merit stops and Mbappé carrying the weight in attack. The PSG player put Hungary to the test a few minutes to 90 and even Varane, with a good header, tried it already in the last gasp of added time.

But there was no way to change that 1-1 that leaves the French team without the illusion, nor the pomp generated after the debut against Germany (0-1) and – most importantly – without the mathematical ticket for the round of 16. Plus, get your rival into the playoff battle. The Gauls will face Portugal on the last day and Hungary, the Germans.

– REFEREE: Michael Oliver (ENG). He cautioned Pavard with a yellow card (min.10) in France; and to Botka (min.52) in Hungary.