The “Paratriarmada” is led by Susana Rodriguez, Andrea Miguélez, and Dani Molina as they win another fantastic World Cup 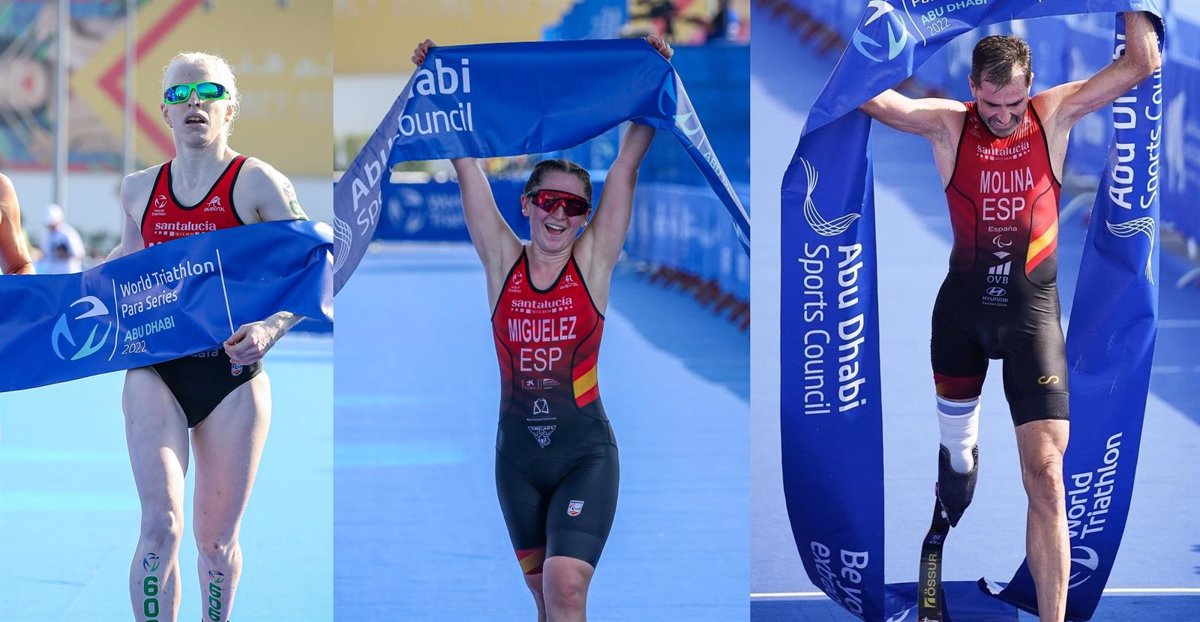 The Galician Susana Rodrguez and Sara Loehr, the young Andrea Miguélez, and Dani Molina, who won their individual titles, brought home five medals for the Spanish paratriathlon team at the Triathlon World Championships in Abu Dhabi.

The current Olympic, world, and European champions in the PTVI category for athletes with vision impairment made it apparent that they are the best duo right now and successfully defended their title from the previous year by finishing more than a minute ahead of Francesca Tarantello of Italy.

Rodrguez and Loehr had to make a comeback after the swimming part because they were about two minutes behind, but they were already in the lead after the cycling segment and kept it in the running segment, allowing the Vigo lady to win for the fourth time in a row.

“Given how my last few months have gone, I am quite pleased with our race. The World Triathlon website quotes Susana Rodrguez as saying, “We also had a slight accident yesterday in the scouting of the route and I was a bit concerned since I didn’t have a lot of confidence, but I’m incredibly thrilled.

The “a lot” of a “technical and quick” race was enjoyed by the Spaniard. She emphasized, “With the heat, I had some difficulties at times, but I thank my guide Sara, who pushed me throughout and is not only my guide, but also my mental coach.

The other Spanish world champion was the talented Andrea Miguélez, a member of the CaixaBank Paralympic Promises Team who, after winning gold in PTS3 (physical disability) last year, this time she did it in PTS4, defeating the American Kelly Elmlinger by more than a minute and a half, with Marta Francés, who won silver in 2021, keeping a priceless bronze.

It was a challenging race. There were a few females who were faster than me in the swim, but I was able to stay up for the first 750 meters. After that, the bike was fast and challenging, but it felt fantastic because I had my legs today. I was able to demonstrate all the effort I put into earning this championship during the race. Paris 2024 is the current objective, and traveling there will be fun. I’m so delighted,” Miguélez admitted.

Dani Molina of Madrid secured the triple crown in the PTS3 class, which he won for the fourth time and improved on his silver finish from the previous year. The Dutchman Nico van Der Burgt, who the Spaniard eventually passed in a thrilling section of the race to lead by 15 seconds, put up a strong fight against him. Kini Carrasco, a veteran from Extremadura, came in eighth.

“Due to the heat, the race has been really challenging. Up until the third bike loop, I was in the lead, but I attempted to keep the distance under check because I knew that running was my strong suit. I am a world and European champion, and right now, all I can think about is the trip to Paris. I just want to qualify and then I want to dream of becoming a Paralympic champion because this is the first time my class will participate in the Paralympic Games,” Molina said.

Lionel Morales won the final medal for the “Paratriarmada” in the PTS2 class for athletes with more severe disabilities who race on foot, where he also repeated as global runner-up in 2021. The canary, who is currently ranked first, finished 23 seconds behind the French champion Jules Ribstein. In the women’s race, Rakel Mateo finished in an impressive fifth position.

In the PTVI men’s competition, Héctor Catalá, a Paralympic silver medalist, and Carlos Oliver were in contention for the podium, but they finished ten seconds behind him. Eva Moral, a bronze medalist in Tokyo who competed again after giving birth, finished sixth in the wheelchair athletes’ competition, and Jairo Ruiz finished tenth in the PTS5 competition.

One thought on “The “Paratriarmada” is led by Susana Rodriguez, Andrea Miguélez, and Dani Molina as they win another fantastic World Cup”