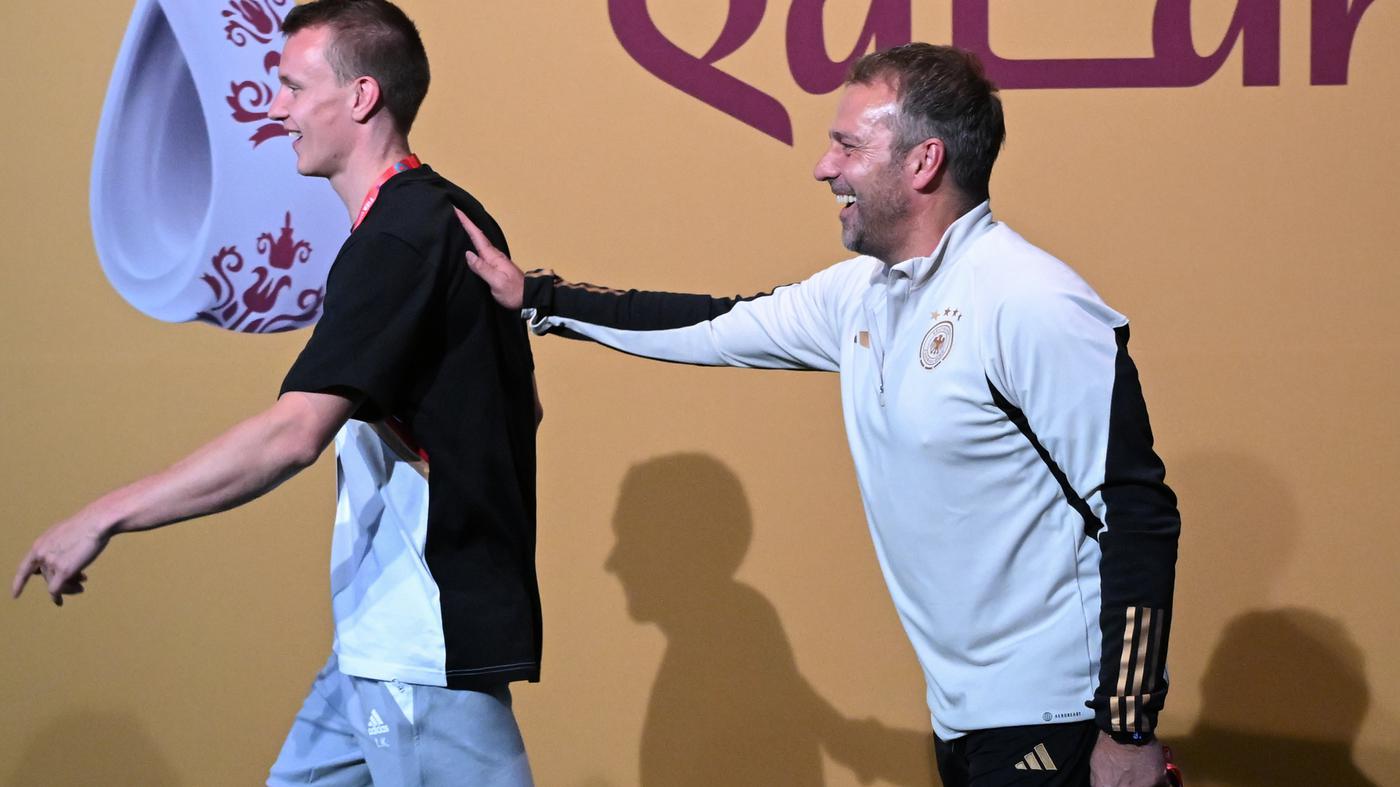 National coach Hansi Flick did not let Costa Rica look at his cards before the decisive group game at the World Cup in Qatar.

“Nice try,” said Flick in the press conference on Wednesday when asked whether, for example, striker Niclas Füllkrug, who was successful as a joker in the 1-1 draw against Spain, would play from the start on Thursday (8 p.m. / ARD and Magenta TV). “We’ll see.”

Flick also did not want to comment specifically on other personal details. Whether Leroy Sané will play his 50th international match after his strong performance after coming on as a substitute against Spain in the starting XI was left vague by the national coach, as was his thoughts on filling central midfield.

Joshua Kimmich, Ilkay Gündogan and Leon Goretzka were only in the starting eleven together under Flick for the second time against Spain.

Sané no longer has knee problems

“He has no problems, like so many others he is a good option for this game,” said the national coach about Sané and only reported on the difficult decision to play before the Spain game. The 26-year-old missed the opening game against Japan (1-2) due to a knee injury.

“We discussed the situation with his doctor, discussed it with his therapist, then agreed that we’re going to do it the way we did it. I think that was the right decision,” said the national coach. “That’s why we’re happy,” added Flick.

Lukas Klostermann, who defended on the right flank behind Sané after coming on against Spain, praised the Bayern attacker. “Leroy has shown that he is a player who can decide the game on his own, that he can create magical moments,” said the RB Leipzig defender, who was present as a player at the media panel.

Flick was only more specific with Klostermann and even indicated a trend. “Lukas is always a good option. He has worked very hard to be able to be here. He did very well against Spain,” said Flick, praising the right-back from RB Leipzig, who was just able to demonstrate the necessary World Cup fitness after an ankle injury.

Even if he is eliminated in the preliminary round of the World Cup, Flick does not think about resigning. “I can confirm that from my side – I don’t know what else is going to happen,” said the national coach. “I have a contract until 2024, I’m looking forward to the European Championships at home, but that’s still a long way off.” The DFB selection needs a win against Costa Rica to reach the round of 16 of the soccer finals in Qatar.

Also because of the group constellation, he “very strongly” assumes a defensive orientation of the Central Americans. A draw could be enough for Costa Rica to advance to the knockout stage. “Of course we want to get the game clear early on in order to put some pressure on the other game, but we know it will be difficult against a very defensive team,” said Flick.

Costa Rica’s World Cup dream is alive The “Sele” is the be-all and end-all for the suffering “Ticos”. Nilla Fischer on the “One Love” debate “Don’t understand what’s supposed to be provocative about this bandage” “Air Bäron” is everywhere “Football is important, but not the most important thing!”

When asked about the referee Stéphanie Frappart before her historic assignment, Flick said that he trusted her “100 percent”. He was of the opinion that “she deserved it because of her performance”. France’s Frappart will become the first woman to referee a game at a men’s World Cup. “We’re looking forward to this game and I hope she’s looking forward to this game too,” said Flick. (dpa, tsp)