The connection between Nike, Puma and the future of the Haaland 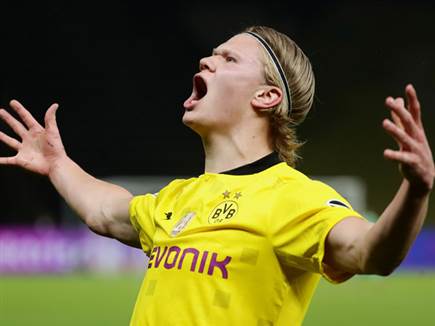 Dortmund will offer a huge contract to the striker, but depends on the apparel companies

One of the players who will arouse the most interest this coming summer is Erling Haaland, Borussia Dortmund’s fantastic striker. He is in the books of all the top clubs in European football who will be willing to invest the best of their money in order to land the Norwegian mega-talent. But are we on our way to a fascinating plot twist?

According to a report in the German “Bild”, Dortmund will be willing to offer its huge Norwegians a huge and unprecedented contract in its terms. And it turns out that the economic options of the yellow-blacks have a direct connection to the clothing sponsor he will choose this coming January.

Due to being one of the hottest players on the continent, Erling Haaland attracts quite a few rehearsals. No, the intention is not for suitors of the female sex, but those who want him to wear their clothes. The striker, who has scored nine goals and netted four in six league appearances, is at the center of a “war” between Nike and Puma that seeks to sponsor who may be the best player in the world in the post Leo Messi and Cristiano Ronaldo era.

Due to the fact that Puma is also the official dresser of Borussia Dortmund, the German team is holding fingers that Haaland will choose the same company. In such a situation, the yellow-blacks will be faced with wider economic options, as Puma will have an interest in seeing the Norwegian continue to wear her uniform in Dortmund as well. If he chooses Nike, it will be more difficult for the Germans as mentioned to keep the striker in their ranks.

In any case, the second-ranked in Germany will do everything in its power to extend Haaland’s contract expiring in the summer of 2024, as this summer the major continents will be able to repay its release clause for an amount hovering around 75 million euros. According to Bild, Dortmund will offer the Netherlands a historic club salary of between 16 and 18 million euros per season.