Despite rumors about the severity of his heart problem, Agüero remains positive 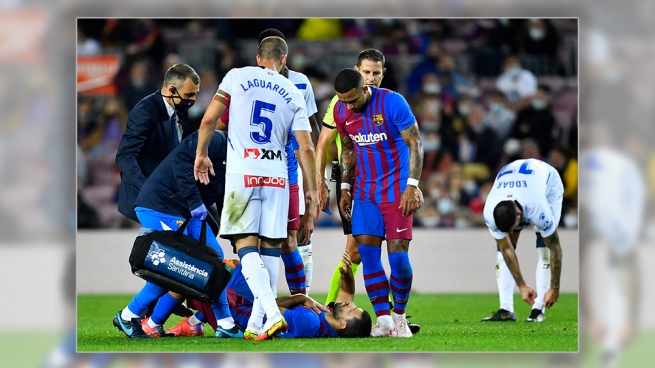 The front Sergio “Kun” Agüero, currently in Barcelona and a member of the Argentine national team, assured with a message on social networks that remains “positive” in the face of rumors about the worsening of the cardiac arrhythmia that he suffers, and that according to a Catalan media could force him to leave football, and stressed that he will continue with the indications of the Catalan club’s doctors.

“Given the rumors I tell them that I am following the indications of the club’s doctors, doing tests and treatment and see my evolution within 90 days. Always positive”, Agüero pointed out through his account on the social network Twitter.

Given the rumors, I tell them that I am following the indications of the club’s doctors, doing tests and treatment and seeing my evolution within 90 days. Always positive 🤟🏽

That period of inactivity was indicated by the doctors after the player was forced to leave the field of play in the match with Alavés, on October 30 at the 12th. date of the Spanish LaLiga, after suffering a chest discomfort that was later diagnosed as arrhythmia. The player’s message from Independiente de Avellaneda is due to the fact that In the program “El Mati” of Catalunya Radio it was reported that his heart condition worsened and that the doctors notified him that he could be forced to withdraw from football.

Agüero was forced to leave the field of play in the match against Alavés, on October 30 for the 12th. Spanish LaLiga date, when suffering chest discomfort.

The only official statement made by Barcelona was made on November 2, when it reported the situation through a statement: “Kun Agüero underwent a diagnostic and therapeutic procedure by Dr. Josep Brugada. He is out and for the next three months the effectiveness of the treatment will be evaluated to determine his recovery process “.

Agüero, who also received a visit from the AFA medical team, will continue to undergo tests in the coming months but there is pessimism regarding his future in the first level of world football.

The former player of Independiente, Atlético de Madrid and Manchester City has 685 matches in his career at club level and scored 385 goals, while in the Argentine team he accumulates 97 matches and 42 goals.

What is an arrhythmia?

“Arrhythmia is a heart rhythm disorder. Normal heart rhythm originates in a circuit in the heart and follows a transmission sequence that begins in the atria and continues to the ventricles. Elite athletes can have benign or malignant arrhythmias , in both circumstances they need to be controlled. Having this type of cardiac events alternates your functional capacity and puts you in danger during the practice of high-performance sports “, explained to Télam Juan Pablo Costabel, head of the Coronary and Hospitalization Unit of the Cardiovascular Institute of Buenos Aires (ICBA).

The information from Catalunya Radio reflects that the first studies carried out on the player in this observation period assume the existence of a severe pathology.

“If we talk about malignant arrhythmias, we refer to ventricular ones, which come precisely from the ventricles and not from the atria, which tend to have more benign behaviors. In a ventricular arrhythmia, the firing of cardiac electricity, instead of originating in the normal circuit of the heart, arises directly in one of the fibers of the heart muscle at the ventricular level. The heart rhythm becomes much more anarchic, accelerated and does not respect the normal frequency “, differentiated Costabel.

The head of the ICBA stressed the importance of “knowing the origin of this arrhythmia”, something that may be of a “genetic” nature or it may be “an acquired phenomenon” without any connection to it.

That last possibility could be related to “an inflammatory heart process that he has had at some point”, presumably due to the contraction of Covid-19 this year. “Definitely, the Covid generates myocarditis as cardiac inflammation and without a doubt it can lead to an arrhythmia, although it was also known that Agüero had had an episode of arrhythmia at the age of 12 and that could suggest that it has nothing to do with the Covid- 19 “, he clarified.

The origin of ventricular arrhythmias determines the treatment to be carried out, which depending on the case may or may not reduce the chance of new cardiac episodes to zero. “An athlete like Agüero needs the treatment to be curative in order to play again. If the therapy is not curative, the probability that he will be removed from sports practice increases,” said Costabel.

“Why? Because sport itself is a stimulus for the occurrence of arrhythmias and secondly because of the impact that arrhythmia can have on patients who carry out high-performance activities, that can lead to fainting with cardiorespiratory arrest”, abounded.

Regarding the treatments, the ICBA specialist explained: “One of them is pharmacological and the other is ablation, which is a cauterization procedure to try to burn heart fibers in which the arrhythmia is generated. It is an intervention that is it does by catheterization with a puncture at the level of the groin “.

“In the event that the treatment is not curative, what is considered is the implantation of a cardioverter defibrillator, which is a device to interrupt arrhythmias,” he explained.

Asked about the time of his appearance, Costabel stated: “Agüero is an adult person as an athlete, because he is closer to the end of his career than to the beginning; however, from the point of view of the moment in which arrhythmias appear it is still young”.

“There are genetic problems that are usually expressed around the age of 25 or 30. It may have happened that in all the studies he went through throughout his career there have not been conclusive results because I do not think that at that level of professionalization someone the detection of a heart failure has passed him, “he assumed.

Finally, faced with the hypothesis of a serious pathology, Costabel trusted that “with the interruption of sports practice and the implantation of a defibrillator, he should have a good quality and quantity of life”.