Rugby: The Pumas, at a high level and with improvements in their game, beat Italy 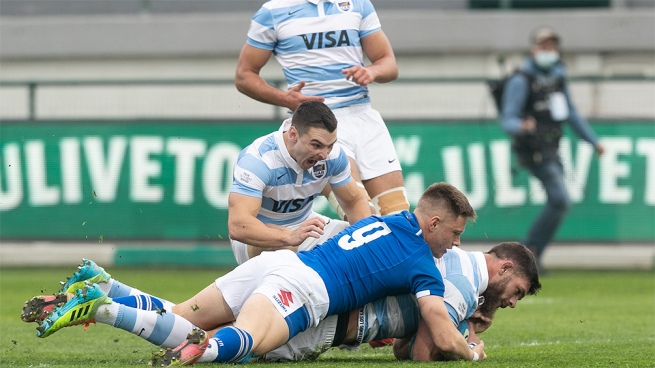 The match played at the Stadio Comunale Di Mongo, (partial 17-6) in Treviso is the second for Los Pumas on their tour of Europe, which will end on Sunday, November 21, facing Ireland in Dublin.

The goals of Argentina came by tries of Marcos Kremer, Juan Martín González, Matías Moroni, Santiago Cordero and Facundo Bosch, three conversions and a penalty of Emiliano Boffelli and a criminal of the admitted Nicolas Sanchez.

The Pumas they cut their adverse streak with a resounding triumph based on the possession of the ball, the dominance of the fixed formations and the forcefulness to score five tries.

From the beginning, the Argentine team dominated the actions and after two shipments with the foot of fullback Emiliano Boffelli, Marcos Kremer and Juan Martín González supported the first two tries.

End of the match and triumph of @pumas!

The solid defense and the handling of the tactical game with the feet were the determining factors to take the actions to the opposite field and reach a favorable partial of 17-6 with two conversions and a penalty from Boffelli. Meanwhile, Italy discounted with two penalties won by Paolo Garbisi.

At the beginning of the second half, Matías Moroni lengthened differences with another try after receiving a pass from Pablo Matera, a conquest that was converted by Boffelli.

Then, the Pumas gave the game to Italy who managed to score their only try through Stephen Varney when they broke off an advance of their forwards.

The Pumas regained control of the actions and Santiago Cordero, in a counterattack, supported the fourth try that practically sealed the victory, which was rounded off by the entered Nicolás Sánchez with a new penalty and Facundo Bosch with another try after breaking off a maul.

On balance, the Argentine team achieved a categorical victory by taking advantage of the opportunities that were presented to them. The forcefulness was the positive point of his game.

The Argentine team managed to cut a negative streak of seven consecutive lost games. Photo: @LosPumas
On the other hand, the Albiceleste team lacked precision in handling the ball with their hands and it will be one of the aspects to improve for the next match against Ireland, a rival far superior to Italy.

The Pumas in their debut lost against France, by 29 to 20, last Saturday at the Stade France in Saint Denis on the outskirts of Paris, and the tour will have as its last stop the test on Sunday, November 21 with Ireland, in the Aviva Stadium in Dublin.

Those selected from Argentina and Italy were measured 24 times, Los Pumas won 18 times, lost five and a draw was recorded.