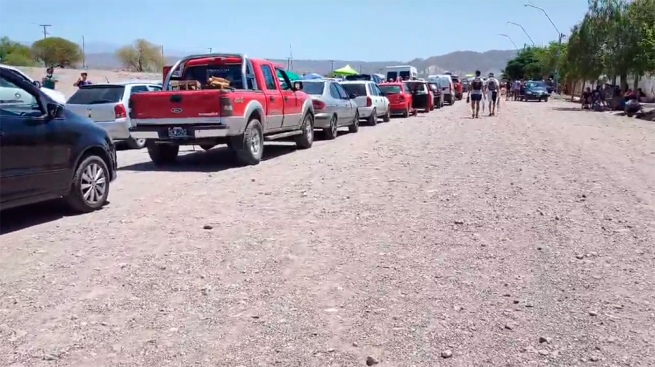 A line that exceeded four kilometers was formed in the city of San Juan to acquire the ticket for the South American superclassic between Argentina and Brazil, to be played next Tuesday for the qualifiers for the Qatar 2022 World Cup, at the Bicentennial Stadium in the capital of the province of Cuyo, and before that demand the start of the sale scheduled for 9 am to 11:45 pm on Sunday was advanced.

The crowd of fans settled in the surroundings of the place of sale already from Saturday night and went through the entire day of this election Sunday with lounge chairs and portable refrigerators waiting to get one of the 18,000 available seats (two will be sold per person ).

The most important national team classic in the world with Lionel Messi and Neymar as standard bearers by both sides, plus other figures of the highest world level, fired in the homeland of AFA president Claudio Tapia, a popular fervor that waited until 22.20 of this night for the police to run the fences that would allow fans to get close to the outlets.

The tickets for this match to be held at the San Juan del Bicentenario stadium will be held in person at the new El Villicum Autodrome, in the Albardón department, where 15,000 seats were available to sell, while the remaining 3,000 will be sold from the early morning through the Self-Entry platform.

Argentina and Brazil, already qualified for Qatar 2022, will meet next Tuesday from 20:30 in San Juan, for the fourteenth date of the South American World Cup Qualifiers.

If the Argentine team defeats the Brazilian and on the same day Colombia fails to overcome Guillermo Barros Schelotto’s Paraguay, those led by Lionel Scaloni will qualify for the World Cup four days in advance, and San Juan fans will have the opportunity and the privilege of enjoying it. in his house.