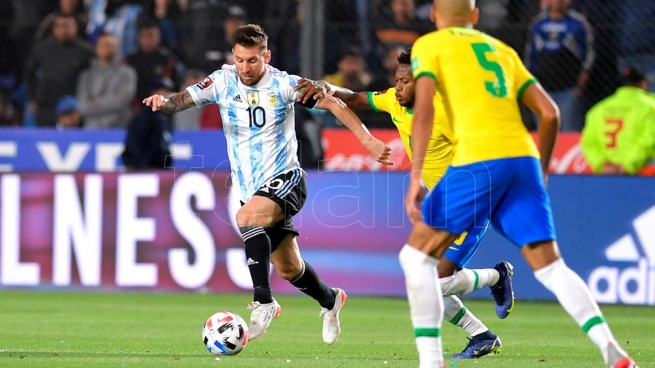 The Argentine team drew without goals with Brazil tonight for the fourteenth round of the South American Qualifiers before an endearing public that sheltered him in the crowded San Juan del Bicentenario stadium, and qualified for the Qatar 2022 World Cup with the subsequent victory (45 minutes later) Ecuador against Chile. since the trans-Andean team (the first team that does not qualify for the moment) and Peru (the team that is currently in playoffs), they will not be able to reach it.

The symbol of union of this Argentine national team, one of its great capitals, was revealed before the start of the game when the 11 starters showed a flag of support and support for a teammate who could not be in this call as Sergio “Kun” Agüero, who is being treated in Barcelona for a heart condition.

After that, what came to the crowded San Juan del Bicentenario stadium was a match between qualified Brazil and an Argentina that tonight also wanted to access the Qatar World Cup, visualizing that there were previous results that facilitated that goal.

Of course, for this he had the obligation to beat a Brazilian team diminished by the absences of two emblematic players from Tite’s team such as Lionel Messi’s great friend, Neymar Junior, as well as his partner in Paris Saint Germain (PSG), and the midfielder. of Real Madrid, the suspended Casemiro.

That is why the proposal of those led by Lionel Scaloni was to exert high pressure from the very start of the match, seeking the leading role not through possession but through recovery.

It is that in the first item the three inhabitants of the Argentine environment, Rodrigo De Paul, Giovani Lo Celso and especially Leandro Paredes, who felt the month of inactivity were not specified due to the tear he suffered in the right quadriceps, since their previous meeting had been against Peru on the triple date of October.

Then Fabinho and Fred were the ones who handled the ball with greater precision in the initial 20 minutes, and as a result they generated a couple of occasions at the feet of Vinicius Junior and Matheus Cunha, at the time replacing Neymar and Gabriel Jesús, which were squandered. for the poor execution of both.

Later, when full-backs Nahuel Molina and Marcos Acuña were able to take off more from the sides and Lionel Messi began to find the ball more, Argentina was the one who got a little closer to the fence defended by Alisson and returned courtesies to his rival with other two risky arrivals at the feet of Lautaro Martínez and De Paul, this one very well resolved by the English Liverpool goalkeeper.

The final minutes of the first half were lodged in some strong legs and an elbow from Nicolás Otamendi to Raphinha that ended with the steering wheel of Marcelo Bielsa’s Leeds cut on the lower lip, although the only red that was seen in that action was the blood of the Brazilian and not the card that the Benfica defender would have deserved, who today was among the 10 players with the most participations with the Argentine jersey.

The former Velez reached 88 games, beating by one nothing more and nothing less than Diego Maradona, who wore the Albiceleste shirt 87 times.

The second stage started with a greater presence of Brazil, which from the insinuations observed in that same section of the initial period, went directly to exercise possession of the ball and therefore to handle the reins of the development of a match that was beginning to be made. uphill to the Argentine team.

And this happened despite the fact that from the very beginning of the complement Scaloni decided to remove Paredes so that Lisandro Martínez entered as central midfielder, although the Ajax player has long since left that position in the Dutch team, because he was established as a central marker in a four-man defense in which left-back Nicolás Tagliafico lost his place.

Argentina was then more with fervor than with play, knowing that Colombia had drawn goalless at home with Paraguay of the “twins” Guillermo and Gustavo Barros Schelotto and the victory, which was within reach of a goal, sealed his passport. to the World Cup in Qatar without depending on anyone.

But that conquest never came, but qualification did come thanks to the victory of Alfaro’s Ecuador over Chile, 2-0.

In addition, Scaloni’s team won 27 consecutive games without defeats and the end, with the union between players and fans sheltered in the magnificent San Juan stage, also had the flavor of victory and an identification between the parties that Argentine football was long ago wanting and needing.

La Albiceleste secured a place in the next FIFA World Cup and is the second South American representative to get a ticket. Congratulations, @Argentina! 🏆👏#EliminatorySudamericanaspic.twitter.com/IegOn3qBxx