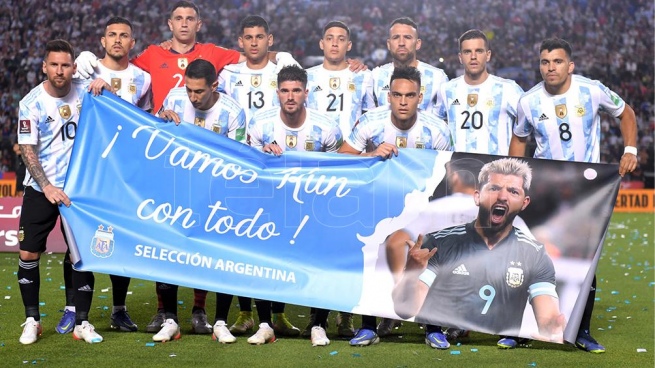 The Argentine team, with the last night’s goalless draw against Brazil, and thanks to the defeats of Uruguay and Chile, plus the equality of Colombia, left San Juan last night with the great goal accomplished of qualifying for the Qatar World Cup 2022.
Not even the most optimistic man thought a year ago that the team led by Lionel Scaloni, one of the great winners of this project, would have the two goals achieved during 2021: to become champion of America and have the passport for next year in Qatar.

“The year is dreamed: we won the Copa América, we are undefeated and we qualified for the World Cup four dates in advance, and one game without playing. I do not like to enlarge things but it is to be proud of the team. We achieved this with a lot to play in a very tough qualifying, “said Scaloni at the press conference.

Then, he opened a door to avoid creating false expectations: “I know that difficult times will come and we will have to be prepared,” said the 43-year-old coach from Rosario.

Argentina achieved the passage to the World Cup five dates in advance for the first time in its history since this system has been played, in the last six South American Qualifiers.

Beyond the cold numbers It is necessary to value as the most positive thing about this Argentine team its closeness to the people: The Argentine fan again shouted for his team, something that was noticed last night in San Juan, but also in the Monumental in the two previous days at home in the qualifying rounds.

(FW) “We won the Copa América, we are undefeated and we qualified for the World Cup four dates in advance, and one game without playing.”LIONEL SCALONIFW)

Within these two objectives achieved, the replacement of logical figures is also valued, with footballers not known by the local football world, but who came from being figures in their teams in Europe.

Emiliano “dra “Martinez, Cristian” Cuti “Romero and Rodrigo De Paul, for example, which few took into account, were observed by the coach and his coaching staff, where former player Pablo Aimar is a key figure. Now these They are new idols for the fans and are on the podium led by the “only one”, which is Lionel Messi.

At one time, the press who did not agree with Scalon’s appointment was criticized for his particularity of living in Spain and not in Argentina. However, that helped him to have permanent contact with the players who act in the old continent to know their feelings and their problems.

There is no longer talk of the “club of Messi’s friends” and surely that historic victory last July 10 at Maracana, to obtain the Copa América that had not been won since 1993, will have a lot to do with that.

But it is also noted that there is another Messi, as committed as before, but more of a team player.

In addition, it is necessary to highlight the work of the coaching staff to recover Di María for the national team, since everyone knew that the PSG star never had “skin” with the Argentine supporters. That is why no one can believe now that yesterday 25 thousand fans shouted “Fideo, Fideo” at night in San Juan.

To this is added that, after a discreet performance of the team against Brazil, everyone will sing “Give him champion, give him champion” in total support for the popularly called “Scalonetta”.

Thus, the football public values ​​the rebirth of a team that looks like such in pursuit of a goal, and is compared with teams such as Uruguay, Chile or Colombia, who are fighting for a fourth place in the standings and could not make enough replacement to achieve that goal.

Now Qatar is coming, precisely in a year, and Lionel Scaloni knows that this is football and that the “honeys” of glory do not last long.

“We don’t have a chance to play against the European teams, but I don’t think there will be rivals superior to those we face in these qualifying rounds. I do understand that they are different rivals,” Scaloni said with satisfaction at the press conference.

The most important thing about the closure of this expedition of the Argentine team through the lands of Cuyo is the new feeling that what many technical bodies sought without being able to achieve in recent cycles, this team led by Scaloni achieved it more than anything.

First it was to obtain an official title and, then, a qualification for the World Cup. Then, feel – as never in the last decades of the national team – the full support of the Argentine fan.