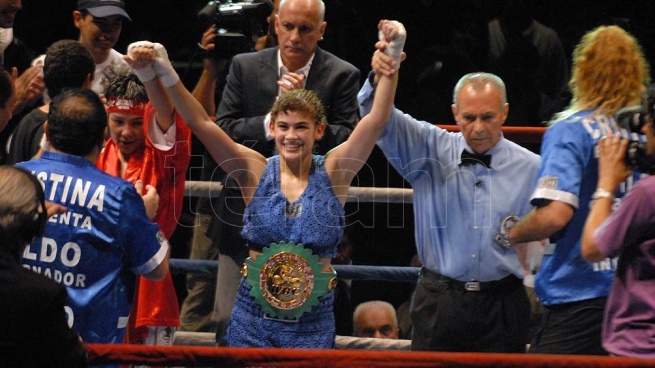 Eleven Argentine boxers appeared at Luna Park over time and it was “La Tigresa” Marcela Acuña who did it first and in greater numbers, which started a story that will grow next Saturday when in the emblematic Buenos Aires coliseum ring the dry impact of the gloves again after seven years.

Formosa Acuña opened the women’s boxing chapter in Corrientes and Bouchard on December 6, 2003 with the conquest of the World Association (WBA) super bantamweight belt by defeating Panamanian Damaris Pinnock Ortega by technical knockout in the sixth round.

It was that unprecedented night in the memory of the mythical venue that built its greatness by dint of the fists of authentic legends of the activity such as Justo Suárez, “El Torito de Mataderos”, Oscar “Ringo” Bonavena, Pascual Pérez, Nicolino Locche and Carlos Monzón, among others.

“La Tigresa” made three defenses of his crown there between 2004 and 2008 before starring, on December 4 of that same year, in one of his most remembered performances with “Locomotive” Alejandra Oliveras, whom he defeated on points with a unanimous decision. in a unification bout for the Association and Council (WBC) super bantamweight titles.

The prestige gained by the Formoseña – holder of the first female license in Argentine boxing – made it possible for her to have another unprecedented event at Luna: to become the first woman to star in a central fight.

As a long-distance runner, she retained the WBC crown twice in 2009 against Mexican Jackie Nava and Jamaican Alicia Ashley in evenings with a vibrant crowd in the stands, those that Juan Domingo Perón and Eva Duarte once occupied when attending the Palacio de los Deportes It was a traditional Buenos Aires nightlife program.

For example, the mystique of Luna Park was also configured over the years with historical events of political, religious, social and artistic life such as the visit of Pope John Paul II, the marriage of Diego Maradona or the performance of Frank Sinatra.

At 45 years old, the “Tigress” Acuña will have her eighth appearance this Saturday at the Coliseum of the City of Buenos Aires, for the third time as head of the billboard. “The legend continues”, a name chosen by its organizers, will offer as its main course its dispute against “La Gurisa” Débora Dionicius, with the interim WBO featherweight title at stake.

Acuña, with a record of 50 wins (20 KOs), 7 losses and 2 draws, will enter the ring for the second time this year after ending an inactivity that extended from May 15, 2019 when she tied with the Mexican Nava in Puerto Vallarta.

Almost two months ago, on September 25, the former super bantamweight champion of the four most important boxing entities beat the Tucumán Natalia Alderete by points -unanimous- in a six-round fight held in Concordia, Entre Ríos.

“La Gurisa” Dionicius, 33, will assume his 35th. He fights as a professional, with the intention of improving a record of 31 wins (6 KOs) and three setbacks. It will be his third presentation of 2021 after losing to Gloria Yancaqueo in Mar del Plata and defeating Lilian Silva in Concordia.

The Villaguay boxer from Entre Ríos was the Federation’s super flyweight champion (FIB) in the past and one of her thirteen defenses was carried out at Luna Park on September 7, 2013 when she beat Colombian Olga Julio on points.

This Saturday’s undercard will be completed with seven other men’s fights, among which are the semi-fund clash between undefeated knockout Braian Suárez (15-0, 14 KO) and Colombian Juan Boada (11-2, 5 KO) for the vacant WBO Latin middle heavyweight title.

The capacity of Luna Park will be enabled for about 6,000 people, which may purchase tickets with the following values: ring side (5,500 pesos), super pullman (4,800), high ring side (4,000), high wood (3,000), headers (1,800) and wheelchair sector (1,800).
}
Attendees will be controlled with a temperature measurement, must present an affidavit and remain with masks during the evening as preventive measures for the coronavirus pandemic.