The ‘Russian’ Ascacíbar, his desire to play with Messi and the dream of Qatar 2022 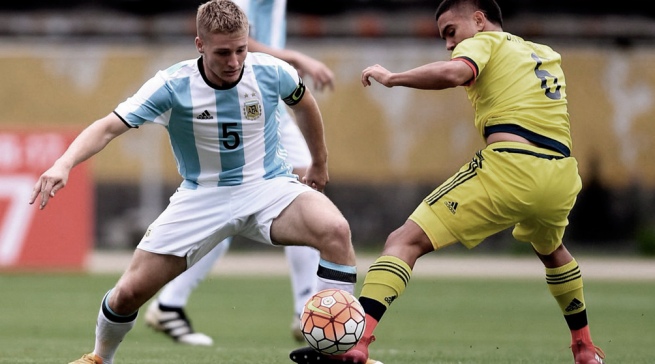 Hertha Berlin midfielder from Germany Santiago Ascacíbar slipped his desire to play with Rosario star Lionel Messi in the Argentine national team and affirmed that he maintains his illusion of playing the 2022 World Cup in Qatar, a competition that will be exactly one year away from this Sunday.

“I hope I play with Messi. He produces the same thing as Diego Maradona. It gives me great joy how he plays for the National Team, how he plays for his teams and I have no words to describe everything he does. I would love to see him in person and more in my position where I would have to stop him; that’s how you learn twice as much, “said Ascacíbar before the Télam query in a press contact organized by the Bundesliga.

“I’m not going to get off Qatar. I have the mentality that I can be there. I must do things well at the club because (Lionel) Scaloni and his coaching staff watch all the leagues,” added former Estudiantes La Plata, who was called up in the friendlies against Guatemala and Colombia in September 2018, and Brazil and Iraq in October of the same year.

The 24-year-old midfielder told Télam that he had no recent contact with the coaching staff of the Argentine national team, one of the 13 teams qualified for Qatar 2022, but awaits his chance.

“To be called from the national team you have to be in a very good moment. Today I am very well, I have to play and I added many minutes in the Bundesliga, which is very competitive and I hope to continue doing well. I set short-term goals and tomorrow we have a nice game to play and win; if a call comes later, better“, indicated the” Russian “.

The La Plata midfielder was appointed in the past as the “next Javier Mascherano” in the National Team. His first great experience took place during the Rio 2016 Olympic Games, cited by Julio Olarticoechea, in an institutional and sporting context very different from the current one.

“I do not regret having gone to the 2016 Olympics. It was my first time in the national team. I went and enjoyed it. I would have loved to have been in the last. I had prepared myself, I came in a different way, I was more mature. They are decisions from the coaches. You learn from everything and football is always going around, “he said.

For Ascacíbar, the German league “takes a plus out of all of them, except the Premier League” and before the consultation of Télam he highlighted his virtues: “In the Bundesliga the technique and physical level is very high. It is a very strong championship” .

In the comparison, Ascacíbar affirmed that he missed “the emotion” of the Argentine league because, he said: “It is the motivation that the Argentine has when it comes to playing a game. A great commitment that here is more difficult to find, but I am looking for it. because it starts my engine. “

The “Russian” has played in the Bundesliga since 2017, when he was transferred from Estudiantes La Plata, his home club, to Stuttgart. In 2019 he went to Hertha Berlin, his current team.

“In the Bundesliga I changed a lot the way I hit the ball. I don’t know if I didn’t have it or I didn’t realize I could do it. Here I improved a lot. Maybe I changed the control of the ball and I have one more option, always. Here you play much faster and you don’t have that much time. Here you have to solve quickly, “said the Argentine midfielder.

Ascacíbar is preparing for tomorrow’s classic against Union Berlin, as a visitor, for the 12th date of the Bundesliga and the previous one brought back memories of Estudiantes-Gimnasia.

“They are different. With Estudiantes I lived it differently. Two weeks before it happened to me that I wanted to win it, here it also happens to me, but it is different. I will try to put all the emotional part into it. Argentina, where there is a lot of fire or itch. It will be the first full-court match since the pandemic and then I’ll see how he feels, “said the former Stuttgart.

Ascacíbar declared himself a big fan of Maradona. To such an extent that the image of “10” was tattooed on his right leg. In 2018, Diego found out and thanked him through a video.

“I would have liked to meet Diego, even to say hello. I never asked anyone for a photo and I would have liked to ask for one. I have no words to describe what he was as a player and what he makes me feel when I watch his videos. When I have time I watch the video and it excites me. I would have loved to have the chance to meet him, but I’ll get to know him, “said Ascacíbar.

At the same time, with his heart in the “Pincha”, he relativized Maradona’s step as gymnastics coach: “I did not take myself the wrong way. I was going to love him the same, whatever he does.”

Ascacíbar assured that his idea is to return to Argentine football when he turns 30 because “it is an age of physical fulfillment”, although it will depend on the interest of a European club.

Finally, he affirmed that he is aware of the Professional Football League and praised Marcelo Gallardo’s River Plate: “It seems that they have played together for 20 years. It is at the level of a European team.”