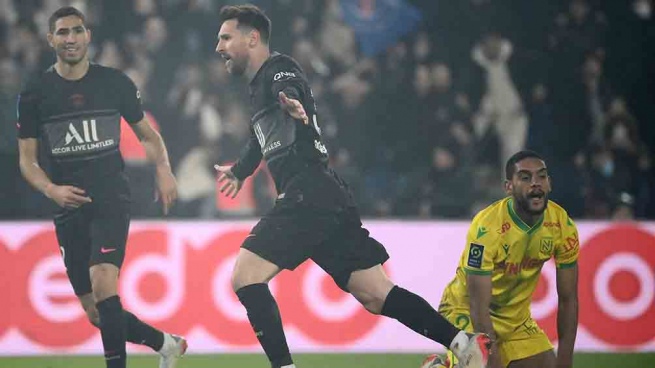 Lionel Messi scored his first goal in Ligue 1 with Paris Saint Germain, who beat Nantes 3-1 at home in one of the matches corresponding to the 14th. date of Ligue 1 in France.

Messi had so far celebrated for the Champions League but 42 minutes into the second half he made his usual hook for his left leg and with a strong shot he finished the story.

The Rosario was absent from the last two commitments, against Red Bull Leipzig for the Champions League and against Bordeaux for the local tournament, due to muscle and left knee discomfort that led to a trip to Madrid for treatment in a specialized clinic .

The Argentine last played for his club on October 29 against Lille (2-1), a match in which he was replaced in the second half.

AFP photo
The reappearance of Leo took place with the shirt of the selected one of his country in the recent date of South American Qualifiers: he played 15 minutes with Uruguay, last Friday in Montevideo, and the complete game against Brazil, on Tuesday in San Juan.

In addition, in PSG Kylian Mbappé (3m. PT) and Dennis Appiah (36m. ST) scored, against, and Randal Kolo Muani (30m. ST) equalized momentarily, with a goal from a cue.

In turn, the Costa Rican goalkeeper Keylor Navas was sent off after 20 minutes of the second half and was replaced by the Spanish Sergio Rico.

In Paris Saint Germain also started the Argentine Leandro Paredes, while his compatriot Ángel Di María was on the substitute bench along with forward Mauro Icardi.

With this result, PSG remains the leader in the competition, with 35 points.