Enzo Pérez: ‘I’m happy because we got a great championship’ 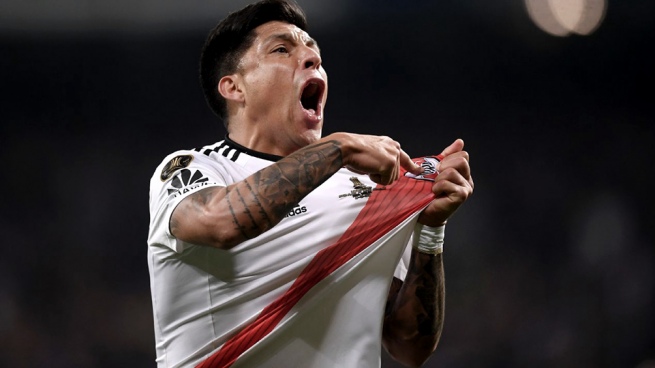 Enzo Pérez said he was “happy” and classified as “a great championship” the local title won tonight after the 4-0 win against Racing at the Monumental stadium.

“I am happy because we have achieved a great championship,” said the midfielder in television statements about the title number 36 in the history of the institution of Nuñez.

“We found a great regularity of matches that were very important to us during various dates,” he continued over the 16 games without losses, with three draws and 13 wins.

The 35-year-old midfielder also referred to the elbow dislocation he suffered in the 1-0 win against Platense last date.

“I got it pretty cheap, I really thought it was going to be worse. Although I’m better, I have a few more weeks of recovery,” he explained about his ailment.

Julián Álvarez, author of a goal in the victory against La “Academia”, highlighted the “confidence” of the group as one of the virtues in this brand new title.

“The superiority was reflected in the points we got. We got a lot of points and we feel very confident, despite the losses due to injury or to be in the National Team,” he said.

#LPFxTNTsports | Enzo Pérez, one of River’s figures, spoke of his happiness at winning the championship: “We deserve it for all the effort, what we did and all the difficulties we have had in the championship.” pic.twitter.com/eh8PzTxLwH

“I feel joy for the group and the people. It is a reward for work and all that is seen in the results we achieve,” he continued.

“In all this time I learned a lot to grow and continue adding things,” said the forward of the Argentine national team about his desire to progress at the River Plate club.

Álvarez, 21, finally referred to River’s string of triumphs in the current tournament and at the same time highlighted the key games to be able to obtain a new crown.

“The games we played against Boca and Talleres were very important to be able to score points,” closed Julián Álvarez.

One thought on “Enzo Pérez: ‘I’m happy because we got a great championship’”