Law and Order: This is how the new laws managed to change the NBA 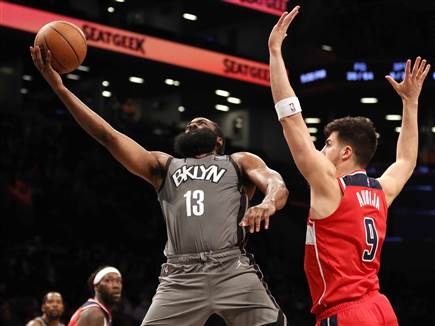 The best basketball league in the world stopped a phenomenon that hit the industry this summer, and the result – a refreshing season with the fewest free throws ever and a much more regular game. Some of the stars are suffering, but Avdija says thank you

The NBA was thirsty for change. If you have come this far and you are reading these lines, you have probably more than once or twice found yourself in non-hours watching that basketball overseas. And if so, you probably know well the tired nights where all you wanted was to see basketball flowing and fine, and instead you got a slew of disconnected moves from the industry that shortened your fuse and extended the game.

Superstars like James Harden, Trey Young, Luka Doncic and many others looked at everything that is allowed and forbidden to do on the floor – and started playing with the boundaries. Simply put, they used their game wisdom to squeeze offenses and become the judges ’biggest nightmare, and sometimes the crowd’s as well.

Last summer the league captains decided to put an end to this with new rules that took out of our screen the same annoying moves that sometimes made us wonder if we were really watching basketball. About a month into the 2021/22 season it is possible to start examining the effects, the gainers and the losers, but before that we will align and move on to the new constitution.

During the break the NBA issued the following official announcement: “In the coming season there will be changes in the judging of overt, sudden or unusual moves that are not ‘basketball moves’ and are made by attacking players with the ball in order to blackmail offenses.” You can no longer lock the hands of defensive players, you can no longer lock a player on your back and wait for him to enter you, you can no longer make contact with a jump into the body of the guard, you can no longer throw your foot aside during a shot. But it is possible, and especially desirable, to return to enjoying the industry we love so much.

Steph Curry tries to draw the 3-point shooting foul but does not get it. pic.twitter.com/XPp0LLelHu
– ClutchPoints (@ClutchPointsApp) October 5, 2021

The effects of the revolution
1. The lowest penalty shot rate in history. Since the NBA was founded 75 years ago, each season and season the average free throws per team per game has stood at over 20. In the beginning there were seasons with an average of almost 40 shots from the line, in the last decade this number has ranged from 21.7 to almost 24, and this season – this figure has dropped to 20.0, the fewest free throws ever. Also, the ratio of free throws to shots from the field is the lowest (0.175) since the first season of the league. The corresponding figure is that this season an average of 19.0 offenses are recorded per team per game – the lowest number in NBA history.

2. Less points, more steals. Naturally, if fewer whistles are heard and players go less to the line, there will be a decrease in points and an increase in steals. This is how it looks on the league’s statistics page: The offensive rise in the last three years has led to an average of 112.1 points last year, but that figure has dropped to 107.0 this year. As for steals, 7.9 of these are recorded on average per team per game – the most in almost 20 years.

3. Fun basketball to watch. How to put it mildly? No one buys a ticket to a basketball game or opens a TV to see cheap whistles, flops and free throws in disproportionate amounts. After Brooklyn’s 141: 145 win over Atlanta in December 2020, when Young reached 30 points (14 of 16 from the penalty spot) thanks to some annoying whistles, Steve Nash said, “This is not basketball.” Fortunately, thanks to the refreshing and necessary change, “anti-basketball” has been replaced by more regular, more aggressive basketball, in other words – more fun.

What do the stars say?
While the vast majority of viewers are happy with the change, opinions among the players are a bit more divided, with the main argument being that the referees let “hit” in a way that blurs the difference between offense and offense. Young was asked to share his views on the new laws, replying: “I do not want to get too high a fine, but it’s annoying. Judges miss too many whistles, they are still learning. There are things I agree with, but in many cases unresolved offenses are still committed. “It makes it difficult for small players like me because guards use their hands and feet to stop me. Players will be injured at this rate.”

Harden said: “I’m not going to complain about the rules, it’s not a big deal. I’m just asking judges to whistle an offense when an offense is committed. Paul is Paul.” Portland star Damian Lillard was more critical in his response: “The new refereeing is unacceptable.” All three, by the way, started the season not well and slowly increased gear. Compared to last season, the three stand on the penalty line much less on average per game: Young dropped from 8.7 shots to 5.5, Lillard from 7.2 to 4.7 and Harden went to the line an average of 4.7 times in the first 12 games, but has since adapted to the new rules and jumped Back to 10.9 in the last seven games.

Drymond Green took his hat off to the league: “I want to say how delightful it is to see basketball without all those bullshit whistles. People cheated the game and caught players to squeeze offenses, I really enjoy watching basketball this year. Honestly I stopped watching basketball a bit, there were too many flops, Waving hands, and players cheating to go to the line, so I think the change is great. There are no more players doing this rubbish and squeezing offenses. The game has become a competition in the past who squeezes more offenses. No one wants to watch it, or play it. “It’s purer basketball.”

The new rules changes to the sport are the best thing the league has done in recent history. Watching the game Is muuuuuch different
– kuz (@kylekuzma) October 29, 2021

One thought on “Law and Order: This is how the new laws managed to change the NBA”