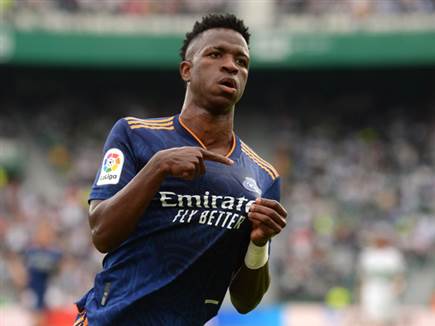 Report: In France complete with the departure of Mbappe and sign the Real star

Only 35 days are left until January 1, so players who end their contracts in the summer of 2022 will be able to negotiate with each club towards a free transfer at the end of the season, and one of them is Killian Ambape. Saint-Germain. And according to “S”, he continues to get closer to Real Madrid after no progress was made in the negotiations.

At the same time, the Spanish ABC reported that even PSG are beginning to come to terms with the fact that they will lose their star to Real Madrid, after failing to convince him to secure his future, even by making him the club’s senior earner. Now, it seems France want to prevent the Blancos from retaining their rising star – Vinicius Jr., whom he has signed as a replacement for number 7. The Brazilian is signed with the Spanish league lead until 2024, with a salary considered particularly low relative to his abilities – about 3.3 million net per season before bonuses.

After a wave of contract renewals at Real Madrid last summer, the club wants to add to the list those who have already scored 10 goals and cooked seven more this season in 18 games. But according to the report, PSG intend to sabotage the move and intend to offer the Brazilian diamond a huge six-year contract with an annual salary of 17 million euros net, so that he can leave on a free transfer in the summer of 2024. Sounds familiar to you? Ask Mbappe.

This is not the first time the French club have expressed interest in the Brazilian, who wanted to join him even before signing for Real Madrid in 2017, and his name has been linked as a candidate to make his way to Paris whenever the possibility arises of a deal to land Mbappe at the Santiago Bernabeu.

Real Madrid, for their part, do not intend to give up on Vinicius, and even when he showed much less good ability, President Florentino Perez declared: “We are not touching Vinicius”. The Brazilian himself recently stated: “I am lucky to have been here for three years and want to be much more. My goal is to make a great career here like Cristiano Ronaldo, Sergio Ramos and Marcelo. It is the best club in the world and I want to stay here for many years like them.” Will he also reject the PSG copy offer?