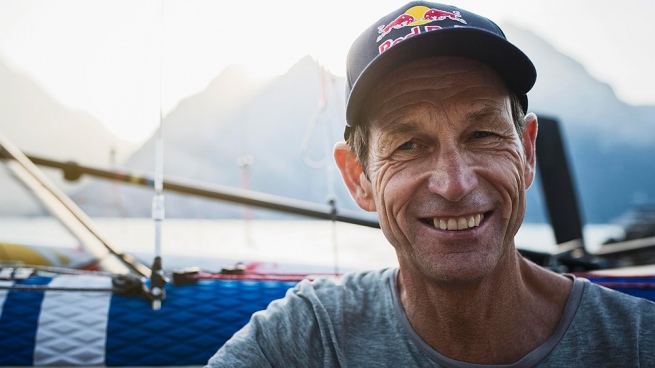 Santiago Lange, who at age 60 began training for the Paris 2024 Games this month together with Victoria Travascio, his new partner in the Nacra 17 class, said that this challenge “is the biggest and most difficult of his career.”

“This is the biggest and most difficult challenge of my sports career. And to that I have to add my age. I am old and the truth is that it costs, it costs a lot,” admitted Lange in statements to Télam.

“There is nothing that drives me nor is it a decision. I am looking forward to this challenge again, to continue training, to try to reach the Olympic Games. It’s as simple as that. It comes out of me. I think and try not to be like that and to look for other things to do in life, which I have, but naturally, I go that way“, he pointed out.

Lange, 60, began training and planning for the Paris 2024 Olympics this month along with Travascio, 33, a double Pan American medalist in the 49er FX class, after pairing with Cecilia Carranza Saroli from 2014 to 2021.

Travascio along with Sol Branz won the gold medal in the Pan American Games in Toronto 2015 and bronze in Lima 2019 and also finished 13th. in the 2016 Olympic Games in Rio de Janeiro and fifth in Tokyo.

The Argentine velista won the bronze medals in Athens 2004 and Beijing 2008 together with Carlos Espínola from Corrientes in the Tornado class; and then, in partnership with Rosario Cecilia Carranza Saroli – -winner of the gold medal at the Guadalajara 2011 Pan American Games in the Laser Radial class- the gold medal in Rio de Janeiro 2016, the first gold Olympic medal in the history of the Argentine candle.

In September 2015, Lange, father of Yago and Klaus – seventh in the 49er Class in Rio 2016 – underwent an operation in which a tumor was removed in his lung.

-Télam: What did you learn from the Tokyo Olympics?

-Santiago Long: A lot of things. In the technical and sporting aspect, but mainly how difficult it is to win an Olympic medal. We had everything to do it and we did not achieve it: you realize that beyond planning and work, there is much more than that. And it helped me a lot to appreciate what I have done before.

-T: How much did it cost you to finish a duo with Cecilia with whom you said “we reached a level of perfection”.

-SL: Very little. It was a decision that we had almost made or that was deciding on its own. We both felt the same, which was to start our separate ways. And it is not a criticism of either of them. We live it very naturally. Today, obviously, I miss her because I started sailing with Vicky and I realize the level of excellence we had. How high and how far we come Starting over gets you very up-to-date on where you were before.

-T: How was the process of choosing your new partner and why did you favor Victoria?

-SL: First the process was whether or not I wanted to continue. First he had to decide whether to continue. It was not an easy decision. Luckily, by chance, someone told me that Vicky was an option and then I realized it. Her role on the ships is to be a helmsman and I was looking for a crew member. He has an incredible sports career. Being fifth in the Olympics and how she faced the Tokyo Games and being close to her made me see that she had the right personality for the challenge. His personality, history and his achievements. Today it is clear that he has much, much to do. You not only have the enormous challenge of changing categories but also of changing positions. It’s something challenging and fascinating for the whole team and here we go.

-T: Did you say that you are very excited about this new project. Why? What reasons drive you to continue?

-SL: There is nothing that drives me nor is it a decision. I am looking forward to this challenge again, to continue training, to try to reach the Olympic Games. It’s as simple as that. It comes out of me. I think and try not to be like that and to look for other things to do in life, which I have, but naturally, I go that way.

-T: How complicated will this new challenge be and why?

-SG: It is enormously complicated. Tokyo taught me how difficult it is to win a medal. The Nacra is a very aggressive boat, very fast, dynamic and responsive. Today, from the level we were with Ceci, we are light years away. Today we are not even the best in Argentina, I would tell you that we are number 3 in the country. First we have to be the best in Argentina, then we have to classify the country in May 2022 in the Netherlands and then get to where the best in the world are. It is a tremendous road.

-T: In all the Olympic Games the path to the medals is arduous, arid, complex, difficult. This new challenge for Paris 2024, where do you place it?

-SL: The most difficult of my sports career from what I said earlier and I have to add my age to that. I’m already big and the truth is that it costs, it costs a lot. The greatest of my entire career.

-T: How long do you think it will take for the pair to meet and learn to navigate together?

-SL: It is an unanswerable question. We have been sailing for a few days. We are in step zero of ten. And I wish it was quick.

-SL: We plan to travel to Europe at the end of February or the beginning of March and do the classic season that is the Princess Sofia Trophy, Hyeres, Medemblick, and Kiel, Germany, and in the middle do training in Marseille, which will be the base for the Olympic Games .

-T: You defined yourself as a privileged person by being 300 days in the year sailed. When you are not in the water, do you stop being?

-SL: I am a privileged person in life: I have friends, a great family, I do what I like, I have everything I need. The truth is that I am very lucky in life.