Boca – Newell’s was suspended due to rain 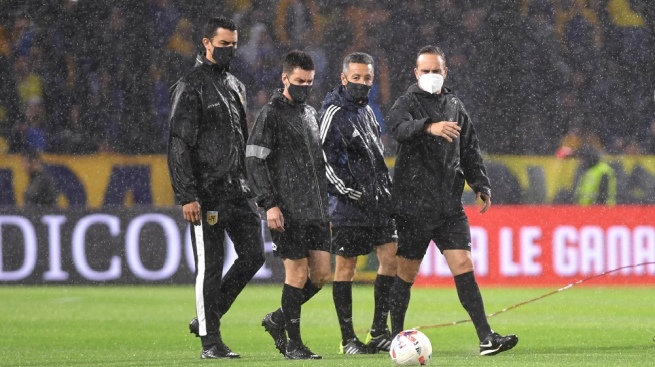 The match between Boca Juniors and Newell’s Old Boys that was to be played this Sunday from 9:30 p.m. on the 23rd. The date of the Professional League was postponed to Monday at 7.15pm in the same scenario, since the Bombonera playing field was flooded in several sectors and this forced the referee, Patricio Loustau, to determine its suspension.

The suspension, however, although it was attributable to the rain, which fell heavily on the City of Buenos Aires since late afternoon, has its correlate in a work not completed by the Ribera club to recycle the entire land gambling, something that was postponed by different interests and now has become a peremptory need.

The measure adopted by Loustau had two episodes, which went through previous exits to the field of play, the first of it when the ball rolled but did not sting, and the second when it was no longer doing neither one thing nor the other.

All this was faced by the referee before an imposing frame of Boquenses fans, who in an approximate number of 40,000 gathered despite the rainy day since the guns, after the title achieved by River Plate, point more to the final of the Argentine Cup on December 8 against Godoy Cruz or Tallares, from Córdoba, before the local competition.

The fans sang as if the game was in full swing and whistled loudly at Loustau, as a way of putting pressure on the judge, but the reality was stronger, as much as the rain that was increasing its intensity, and that is why the suspension was the right thing to do.

But even when the communication was made official through La Voz del Estadio, the fans remained in their places singing in the rain, especially in the tribune that occupies “La Doce”, and they just began to go down the stairs looking for the exit when the lights began to go out.

The resolution on the rescheduling was adopted immediately with the agreement of both clubs and corroborated by the member of the Boquense Soccer Council, Jorge Bermúdez, who also regretted the suspension, since he expressed that it was something “sad for the amount of people who had come to see this game. ”

And the “Patron” went further when he anticipated that “unfortunately this important work to be carried out on the playing field was postponed, when it was scheduled for last August.”

“That decision had been taken after a match with Argentinos Juniors in which something similar happened, but as
immediately the return of the public to the stadiums was announced, it was decided to leave it for later, although now there will be no more delays and they will begin to take place from December 13, “the former Colombian defender announced to ESPN.

Exactly, by then Boca will have already played its last game of this Professional League against Central Córdoba, from Santiago del Estero, and will know if it will play the Copa Libertadores 2022 (it is already classified for the South American for winning the Diego Maradona Cup) for the Argentine Cup or for the local championship. In the latter, at the moment it is being left out for the Annual Table.

“The works are going to be carried out completely and will last for the corresponding time,” Bermúdez remarked, which would imply that in case of qualifying for that Copa Libertadores and beyond the Argentine competition, he would have to play at home on another stage, and there a wide range of possibilities opens up.

Boca has a lot to think about for the immediate future then, and for example in the last hours recruiters from Inter, from Italy, arrived to see in action at the wheel Alan Varela, who is also observed by the Dutch PSV Eindhoven.

The 20-year-old central midfielder who both Miguel Russo before and Sebastián Battaglia now give few opportunities to play despite his good performances, although the reasons do not seem precisely football, comes from playing as a starter the previous game against Independiente, in the defeat by 1 to 0 in Avellaneda.

On the other hand, the one who does seem to want a little more is Ignacio Ezequiel “Equi” Fernández, a central midfielder like Varela and born in July like him, although a year later.

A curiosity happens because both arrived together in Boca in 2012, coming from the then called “Barcelona Project”, which was nothing more than an outpost of the Spanish club to recruit Argentine boys and distribute them in clubs in the country with subsequent effect of taking them to Spain according to your sports growth,

The “Barcelona Project”, which was based mainly on the Luján club, which today is a member of the First C, also had as its development center the old and traditional Boquense training ground in Isidro Casanova, La Candela, tutored by Jorge “Coqui “Raffo, who later took charge of the inferior” xeneizes “and last year he joined as coordinator of the minor divisions of the Spanish Elche.

In La Candela up to 40 boys who were part of this “scouting” process were housed. One of the many discoveries of Raffo was the current leading right-hand marker of the Argentine national team, Nahuel Molina Lucero from Cordoba, when he was 11 years old, during a test carried out in his native Río Tercero Reservoir. Today he is 23, and “Coqui” also added him to the “Barcelona Project” and in 2016 he arrived in Boca from there.

Bjerg ends just outside the podium

Demand from Human Rights Watch before the World Cup in Qatar: DFB should work for reparation funds

Thirty years since Higuita changed the game of football