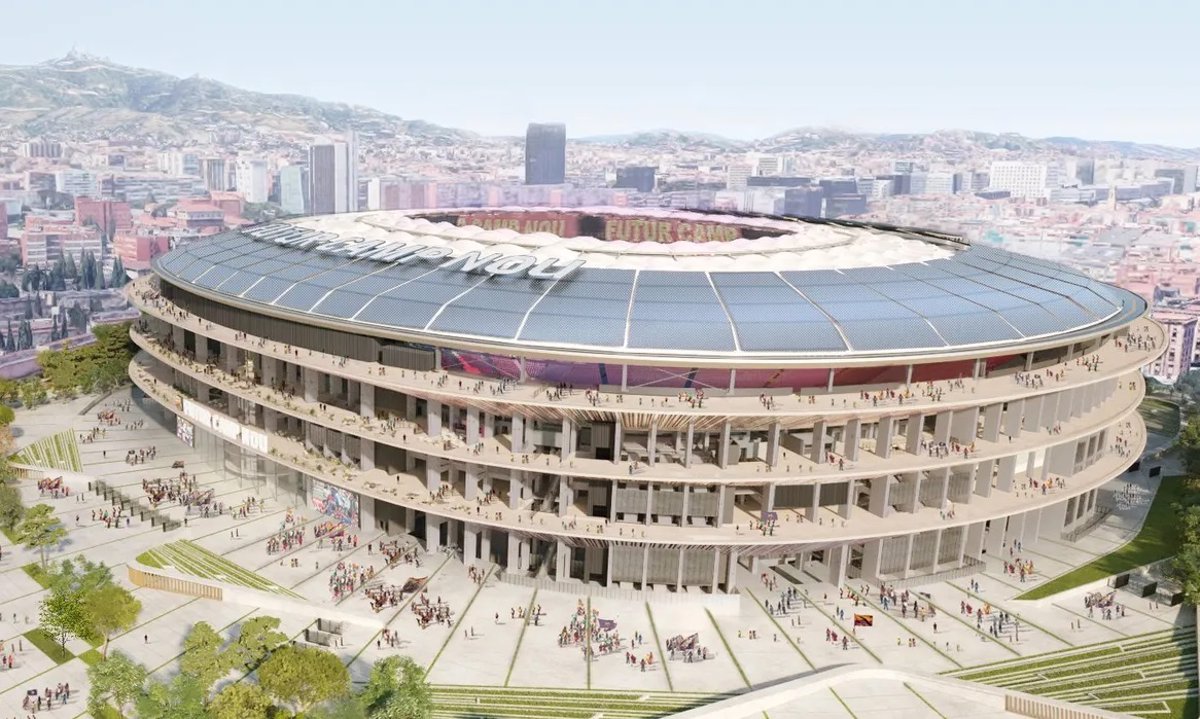 FC Barcelona should play the 2023/24 season away from its stadium, a Camp Nou that if the referendum of the ‘Espai Barça’ is approved (December 19 telematically) would be under construction from 2022 to 2025 and, in that period of four years, it would force to reduce the maximum capacity and to play that campaign in another stadium within the Barcelona area.

“The current plan is to play in the stadium in the first season, with the field partially closed. In the second season the plan is to go away and the other two to return to the Camp Nou with the most outlined plan. Being in the second season, we still have time to decide where, “said the club’s general manager, Ferran Reverter, at a press conference on the ‘Espai Barça’ referendum.

Reverter explained that it would be something similar to what Athletic Club did with the new San Mamés, with the field partially closed. “The partner’s attendance would be rotating, for that first year. In the second year, until now we had more pressure to decide where to go but we are still evaluating. We will decide in months,” he said.

“We will not leave the urban circle of the city, we will not go to play in Girona, for example. One option is Montjuïc but there are other internal solutions. The alternative of Montjuïc is always there,” acknowledged Reverter.

The CEO gave more details of the ‘Espai Barça’ and of that telematic referendum of next December 19 in which more than 100,000 members of the club will approve, or not, to give the green light to ‘Espai Barça’, whose planned calendar is to start the Camp Nou works in 2022 and the completion of the new stadium in 2025, with the new Palau Blaugrana scheduled for 2026 and the Barça Campus in 2027.

How will this ‘Espai Barça’ be financed? A loan will be requested from Goldman Sachs – “their offer is the best and I do not think we will change” – of a maximum of 1,500 million euros, to finance a project broken down as follows: future Camp Nou (900 million ), new Palau Blaugrana (420 million -includes Petit Palau, ice rink and bus parking-), Estadi Johan Cruyff (20 million), urban investments (60 million) and Campus (100 million).

A credit and expenses that will be paid thanks, in part, to some 200 million additional annual income that the stadium itself and ‘Espai Barça’ will generate, through events (15%), tickets and restaurants (22%), museum (15%), ‘hospitality’ (24%) and sponsorship and ‘naming and title rights’ (24%). “From all this we hope to get about 200 million euros of income, a conservative figure,” he valued.

Among various figures, Reverter commented that they expect to receive a minimum of 400 million euros (in 30 years) from the ‘title rights’ of the new Blaugrana fiefdom, double what was budgeted in 2014 by Sandro Rosell’s Board of Directors, when it was approved a first ‘Espai Barça’ in a referendum valued at 600 million euros.

An outdated initial project. “Why review the 2014 project? Because it is out of date, and because it was undervalued in terms of amount and time when it was presented. The perfect example is the Estadi Johan Cruyff, because in seven years only this stadium has been built, which they said it would cost 4 million euros and it has cost 20 million, “he commented.

Of course, it is a necessary pharaonic project for the club. “If ‘NO’ comes out in the referendum, it would be very, very bad news. We would have to rethink the financial and credit issue. And the stadium would also have to be remodeled, which is in very poor condition. On Benfica’s day there were fans under waterfalls. This is intolerable “, the Blaugrana general manager was honest.

LAPORTA: “THIS PROJECT WILL BE A VERY IMPORTANT LEGACY”

For his part, the president of FC Barcelona, ​​Joan Laporta, assured that the culmination of this ‘Espai Barça’ if the referendum is approved will leave a “very important legacy”. “We want the verdict to be positive, for the yes to come out, and we wish it for the good of Barça. And that it is telematic will make us stronger because there will be more participation. The culmination of this project will be a very important legacy for our children and grandchildren. If we all vote, we will win, “he said.

After the partners approved to authorize the Board to obtain financing for the ‘Espai Barça’, Laporta assured with “pride” that the partners were “at the height of a great institutional and historical setting.” “This is a great opportunity, it is not an expense but an investment that can generate great benefits in order to continue growing and compete at a high level,” he said.

The president explained that, since the first referendum of 2014 in the original ‘Espai Barça’ of the Board of then president Sandro Rosell, 145 million euros have been invested and only 5 percent of the work has been executed, then budgeted in 600 million euros, with the Estadi Johan Cruyff.

“We want to complete the project, which is necessary for the entity, but we have demanded some improvements and modifications that are necessary. It is a redefinition to adapt the project to the new circumstances, and to avoid, among other things, having to move subscribers. Technological improvements have been incorporated. and environmental issues, “he commented on the reforms in that initial project and a new ‘Espai Barça’ that must be ratified this December 19 in the new referendum.

“On the 19th, the decision to authorize obtaining financing will be passed to ratifying this decision, in a telematic referendum. Faithful to the democratic tradition of the club, this Board understood that it had to be decided all together. And it will be a pioneer, by way of telematics, to try to encourage participation and open it to partners from all over the world “, contributed the president.