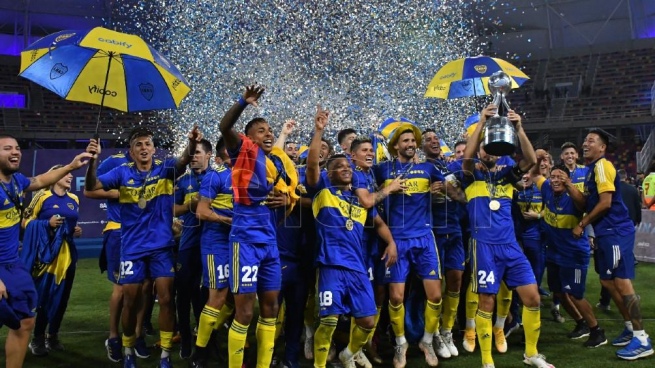 Boca Juniors won the fourth Argentine Cup in its history by beating Talleres, from Córdoba, in definition by penalty kicks, by 5 to 4, after equaling 0 to 0 in the regular 90 minutes of the final played at the Único-Madre stadium of Cities, of Santiago del Estero, this being the first title that he gets from the hand of Sebastián Battaglia as coach.

Photo: Emilio RapettiThe last shot, executed by Eduardo Salvio, who had entered in the final minute of the game, unleashed madness in the stands of the modern Santiago del Estero stadium, where 30 thousand supporters of both fans vibrated with a match that left little in terms of football level.

In the penalty shootout Boca did not miss any execution, and scored through Rojo, Izquierdoz, Pavón, Sández and Salvio; While for Talleres Retegui, Méndez, Díaz and Santos scored, while Fértoli wasted his shot, saved by Agustín Rossi.

Photo: Emilio Rapetti.With the obtaining of the Argentine Cup, Boca ensures the classification to the group stage of the Copa Libertadores next year, a pass that Talleres obtained in advance for the points accumulated in the Professional League season.

The game was blocked at the beginning, highly contested in the midfield, with both trying to clear the game on the wings, although the wings were kept contained in an effort not to leave space for the rival attack, and only one corner per side, without major risks, they were the only approaches in the first quarter of an hour.

A good action by Diego Valoyes on the right, who snubbed Marcos Rojo with a feint, became the first dangerous action when the Colombian assisted Nahuel Tenaglia, who faced to the bottom and finished crossed with power to demand Agustín Rossi, that he cleared towards the middle, and on the rebound the midfielder Rodrigo Villagra could not.

In Boca did not appear Edwin Cardona, very well contained by Juan Méndez, and thus Sebastián Battaglia’s team lacked other options to generate danger in the rival area.

Photo: Emilio Rapetti.Just at the end of the initial stage there was a slight dominance of the “xeneizes”, and it was precisely a shot from Cardona, which passed far from the goal of Guido Herrera, in the only action that generated emotions among the fans.

Although the “T” had the final shot in the first 45 minutes with a shot from Diego Valoyes that Rossi was difficult to contain, the ball slipped between his hands and went over the crossbar to the corner.

The nerves of both sides began to weigh with the passing of the minutes of the complement, which began with the two imprecise teams and without risky actions near the goal.

Photo: Lauro Lescano.The Colombian company Fabra-Cardona-Villa was the Battaglia team’s best bet to achieve the unevenness, taking advantage of the fact that Tenaglia began to encourage itself to attack and left spaces in its sector.

The “T”, with a midfield strengthened by Méndez and Villagra, was looking with Enzo Díaz and Ángelo Martino to open the court on the left, because Boca toughened the mark on Valoyes and took the lead from the right sector.

The expulsion of Juan Ramírez at 21 minutes of the complement completed a poor night for the former Argentinos Juniors and Talleres, which was not precise in the game and due to a double warning left his team with one less player.

Photo: Lauro Lescano.Already with one more man the “albiazul” had a very clear when Santos missed it below the goal after a great center by Díaz from the left, while Boca tried to become strong in the middle to take advantage of some against with the speed of Villa, who He had his chance at 40 minutes but was left without an angle to define against a well stopped Herrera.

The final minutes were very short due to interruptions due to the changes introduced by both coaches and the penalty shootout added a further quota of drama to a final that left everything in the hands of the goalkeepers, both with good records in this type of definitions , and in the effectiveness of the performers.

The “xeneize” team will return to Buenos Aires this morning and next Saturday it will celebrate in front of its public in the ‘Bombonera’ when it receives Central Córdoba, from Santiago del Estero, in the game that closes the season.

Talleres, which was a worthy rival and maintained its illusion until the last, said goodbye to the year on Sunday at the Mario Kempes stadium, hosting Independiente.