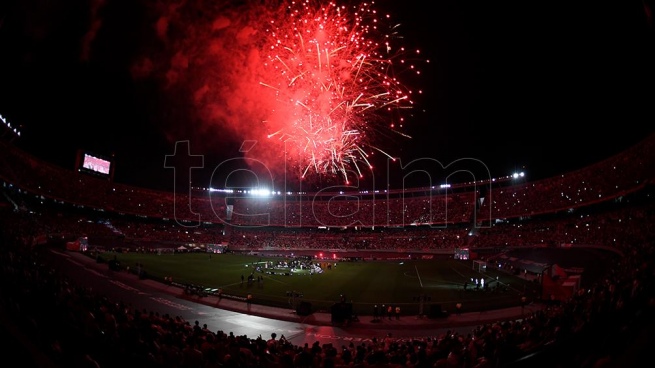 Thousands of River Plate fans celebrated the three years of the “Eternal Cup” obtained in Madrid in 2018 and the announcement of the continuity at the head of Marcelo Gallardo’s team, who said that that December 9 “He won the most beautiful final in the world” against Boca Juniors .

Precisely, the “Doll” had its central moment at night when, near the end, after the memory of the third goal of that victory by 3 to 1, he was presented and only managed to say “good night” for the whole stadium to shout his name.

Excited, the technician who will be 46 years old on January 18, kept a few seconds of silence and said: “Thank you for so much love”, and got up to sing the song: “Thank you, for that joy, of beating Boca, of to be champion, River, I love you, I take you inside, of my heart ”.

(Photo: Claudio Franchi).Gallardo’s shout was joined by all the players, in what was the most exciting moment of the night, and it continued with the fans shouting along with the coach, who as one more fan could hardly speak.

“They wanted to make me sing and they succeeded. Tonight is yours and it is a pleasure to be here. I just want you to close your eyes with me for 30 seconds and think about the pain we would have felt if we had lost. Now open your eyes and vibrate with everyone, because we won it ”, he exalted.

“Enjoy -arengó- because it will be a reality every December 9 for the rest of your life. We won the most beautiful end of life and here we are to continue. Thank you very much and let’s enjoy this, which is unique and eternal ”.

The party continued to the Monumental (Photo: Ramiro Gómez).The development of the event started at 20:30 with the conduction of the radio host Matías Martin and a video of the fans who remembered the moments of that match with the goals of Lucas Pratto, the Colombian Juan Fernando Quintero and the third by Gonzalo “Pity “Martinez.

Then there was a reminder of the verb “Believe” in Leonardo Ponzio’s voice., referring to the phrase of Gallardo before going to hit Brazil to win the semifinal against Gremio with the goal on the hour of “Pity” Martínez, by 2 to 1, from a penalty kick, after the 2-2 in the going.

And immediately, with “Leo” Ponzio at the helm, the squad entered the stadium to the clamor of the people who overwhelmed it (there were around 70,000 fans at the Monumental after the caravan started at the Obelisk) and exploded when they joined the Gallardo parade with his entire work team, who returned the greetings of all the fans.

(Photo: Ramiro Gómez).Captain Ponzio was the first to talk to the people and said: “We really enjoyed that trip to Madrid with the family to play that game that went down in history. So this thanks to the fans for coming tonight ”.

For goalkeeper Franco Armani there was also great recognition. “I always remember the punctual play of heads up and I say the same thing: the goalkeeper is there to do those things. I covered it with my whole body and luckily it happened, because otherwise it would have been difficult ”, he recalled regarding the save against Darío Benedetto in the 2-2 first leg at the Bombonera.

“My dream was always to be a River player and to wear this shirt. That I was able to accomplish and the rest, all that was achieved is for the people, for the group, for the coaching staff. That is why I am happy and I am grateful to everyone for being a player for this club, “said Enzo Pérez excitedly.

The fans celebrated in the stadium (Photo: Ramiro Gómez).The outgoing president who accompanied this entire cycle, Rodolfo D´Onofrio, also had time to speak about the second leg suspended at the Monumental that later went to the Real Madrid court: “It was a complicated moment, because you had to play it and we just wanted to do it anywhere. That’s why we went to the Santiago Bernabéu and won ”.

Right away, Jorge Brito, president-elect, recalled that “that was a tough moment. Because we had to leave our field and knowing that many fans were not going to be able to be in Madrid, that had to be overcome and the title could be achieved on another field, and nothing less than that of Real ”.

The emotion continued with the words of several players who are no longer in the club such as Lucas Pratto, “Juanfer” Quintero (wants to return), Gonzalo Montiel, Ignacio “Nacho” Fernández and Lucas Martínez Quarta, among others who were part of that team .

Around 7:00 p.m. the stadium had its stalls and headers populated, while the music played and the fans walked through the stadium with everything ready for the party, noticing hundreds of commemorative billboards of the game and the players who were in Madrid.

(Photo: Ramiro Gómez).At that time the sports director, Enzo Francescoli, was interviewed on the field of play for the ESPN signal and was one of the first cheers by the fans who were in the Belgrano stalls area.

“For me it was very strange because I was in the box and when Pratto’s tying goal happened I got up to scream and I was alone. Then I had to sit down, but it was strange. Then it was crazy with the third goal from “Pity” Martínez “.

A while later and under the shout of “Pinoooola” from the fans, the defender recalled his enjoyment: “The truth is that it was not lived with nerves, we really enjoyed the previous one and everything that happened. That is why all this is a tremendous pride. It is something I never dreamed of and it is a constant dream ”.

Meanwhile, Javier Pinola’s back teammate in that final, Jonatan Maidana, assured: “We were always calm for the team and the group. Luckily, what we are looking for was given and it is all a dream. They have been at the club for 10 years living unique moments ”.

(Photo: Ramiro Gómez).With the start of the party, while videos were being exhibited commemorating the moments of Madrid that were reproduced on the giant screens, the musical shows began with Los Pibes Chorros, la Mosca, Agapornis and rapper Stuart.

It all started with the massive caravan of thousands of River fans that left the Obelisco at 17:00 and continued to Figueroa Alcorta and Tagle, where the old River court was.

This mobilization was organized and called by the Fan Subcommittee before Gallardo’s request to organize a free celebration at the Monumental stadium to continue remembering that historic “superclassic” three years ago.

(Photo: Ramiro Gómez).The party, which was an idea expressed by the coach that will continue one more year in River, so that the fans continue to celebrate that “eternal 9/12”, was given within the framework of the recent title obtained by the “millionaire” in the Professional League and a few days before a new final (next Saturday the 18th against Colón for the Champions Trophy), which may be the title 14 of the idolized Gallardo .