Boca beat Barcelona on penalties and won the Maradona Cup 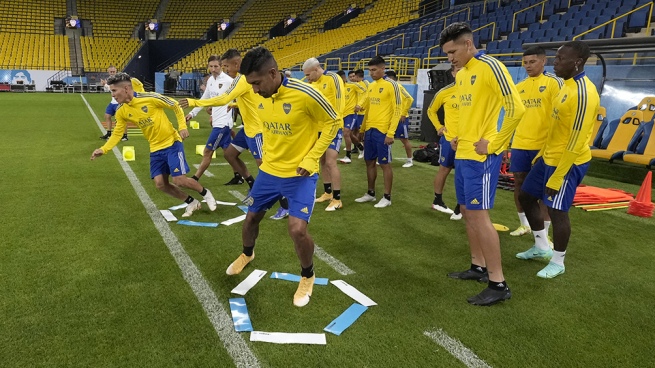 Boca Juniors stayed this Tuesday with the first edition of the Maradona Cup, played in Saudi Arabia, by beating Barcelona of Spain by 4 to 2 in definition with shots from the penalty spot after equalizing 1 to 1 at the end of the 90 minutes.

Ferrán Jutglá opened the account for “Barsa” 5 minutes into the second half and was tied by Exequiel Zeballos (32m ST).

In the penalties the figure went to goalkeeper Agustín Rossi, which deflected Matheus Pereira’s shot. Then Guillem Jaime missed his and Boca sealed the victory 4-2.

For those led by Sebastián Battaglia, Marcos Rojo, Carlos Izquierdoz, Cristian Pavón and Aaron Molina converted and for those led by Xavi Hernández, Dani Alves and Jutglá did.

The match faced two of the teams through which the unforgettable Diego Maradona passed, who died on November 25 of last year, and the cup was a tribute in which his daughters Dalma and Giannina and his ex-wife Claudia Villafañe participated.

The tribute also included a very nice version of “La Mano de Dios” performed by Ulises Bueno. before the meeting. The two schools, in addition, came out with allusive t-shirts; and in the central circle a gigantography of the crack was displayed.

The first half was played to the rhythm of Riqui Puig, who led his team and generated the best chances: two shots (one deflected, one that Rossi stopped) and a change of front for the entry of Dani Alves who finished it with a center instead of finishing off the goal.

The Brazilian himself tried with a shot that took the 1 from Boca and his compatriot Coutinho was also close with a good cross shot, from right to left, which went close. Boca responded with two counterattacks in which Luis Vázquez and Sebastián Villa could not specify.

The Spanish, in crisis after the elimination of the Champions League (and away from the fight in the local tournament, led by Real Madrid), took the lead 5m from the complement with a great goal from Jutglá, with a half-lap inside the area, but Boca protested a previous hand from Coutinho.

From there until the end, Battaglia’s team sought a tie until it was achieved at 32 minutes. Salvio put a great pass in depth for the projection of Fabra on the left, the Colombian put a precise center and the kid Zeballos appeared to establish the well-deserved 1 to 1 in the plate.

The second half left another pearl: a fabulous pipe from Almendra to Jutglá, pure pasture celebrated in the stands of Riyahd.

Thus ended the game to go to penalties, the same formula with which Boca recently celebrated in the Argentine Cup. Rossi did his job, the kickers the same and the first edition of the Maradona Cup, a trophy that accurately reproduces the image of the star, will travel to the Bombonera.

Changes: in the second half, before starting, Ilias Akhomach for Demir (B), Oscar Mingueza for Lenglet (B), Aaron Molinas for Ramírez (BJ) and Exequiel Zeballos for Cardona (BJ); 15m Matheus Pereira for Sanz (B), Guillem Jaime for Coutinho (B), Mika Mármol for García (B), Arnau Comas for Dest (B), Diego González for Almendra (BJ), Alan Varela for Campuzano (BJ), Eduardo Salvio for Vázquez (BJ), Cristian Pavón for Villa (BJ) and Carlos Zambrano for Advíncula (BJ).