Alaphilippe, the first leader of a Tour that starts out winded 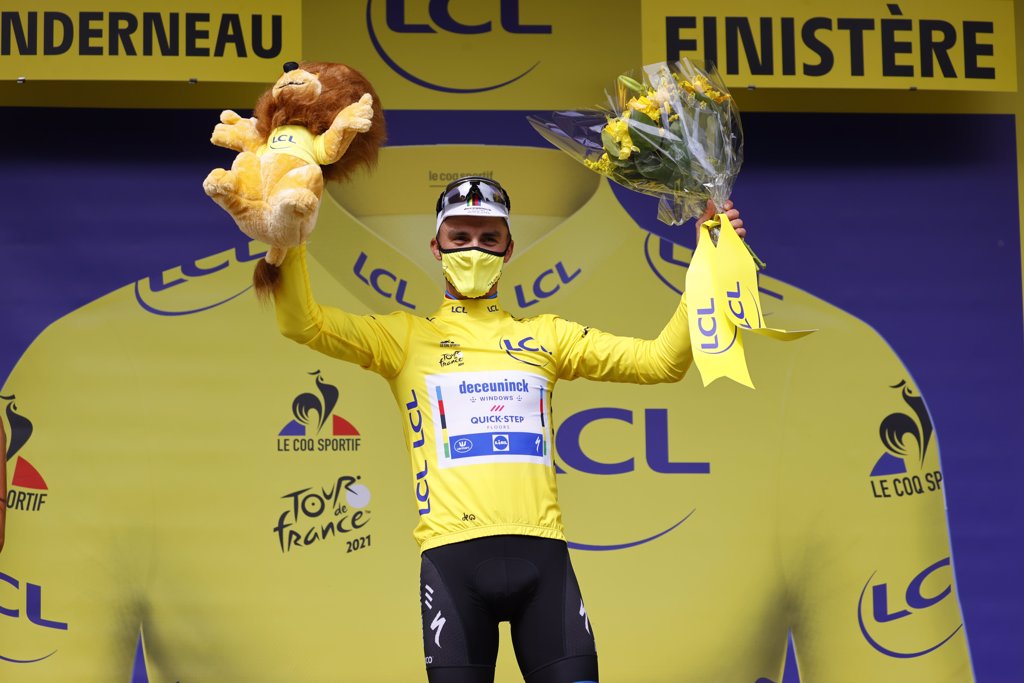 The French cyclist Julian Alaphilippe (Deceuninck-Quick Step) took this Saturday the first stage of the Tour de France, between Brest and Landerneau over 197 kilometers, in an authoritative final sprint as world champion, while the suspense remained seven kilometers behind in the second of two serious falls of the peloton.

Alaphilippe attacked two kilometers from the finish, in the middle of the short but intense climb that decided the first winner and yellow jersey. The Frenchman won without discussion ahead of Michael Matthews (Team BikeExchange) and Primoz Roglic (Jumbo-Visma), podium of a group of 50 riders cut seven kilometers earlier.

A hard fall at maximum speed and that caused the second pileup of the day. The first was 40 kilometers from the finish line, a spectator who, in his eagerness to appear on TV or in a photograph, put his poster and half his body on the narrow road through which the peloton was coming. Tony Martin (Jumbo-Visma) was the first to crash and after him a tremendous pileup.

When it seemed that the worst was over, there was still a second helping for a very bumpy start to the Tour. The frustrating fall of the peloton due to recklessness and almost stupidity resulted in several war wounds and a handful of runners who had to make the effort to get hooked on the race after half an hour.

The second was the one that complicated the Tour for many, to start the first juicy duel and that yellow jersey. Alaphilippe won the final pulse to Primoz Roglic (Jumbo-Visma) and Tadej Pogacar (UAE Team Emirates), both Slovenians positioned from the beginning. Behind, the injury report remained to be known, with the squad launched once it hunted Ide Schelling (Bora-Hansgrohe), the last protagonist of the day’s break.

Richie Porte (Ineos Grenadiers), Miguel Ángel López (Movistar Team), Steven Kruijswijk (Jumbo-Visma) or Chris Froome (Israel Start-Up Nation) were some of the many affected. Between medical and mechanical assistance, the riders were able to seek the finish line to minimize damage in the general classification, since in search of the Côte de la Fosse aux Loups, the head did not look back.

Affected already in the first fall, Marc Soler (Movistar Team) crossed the finish line 25 minutes after Alaphilippe, although the Spanish team saved the tricks of Enric Mas, 18 seconds behind the lead – best Spanish along with Pello Bilbao (Bahrain) and Supermán López, who gave up a couple of minutes. However, Alejandro Valverde, who was aiming for the opening fight and who knows how much more, left almost six minutes.

The Tour will continue this Sunday with a second stage again broken in Breton lands, ending in Mûr-de-Bretagne after 183.5 kilometers.

–CLASSIFICATION AFTER THE FIRST STAGE.