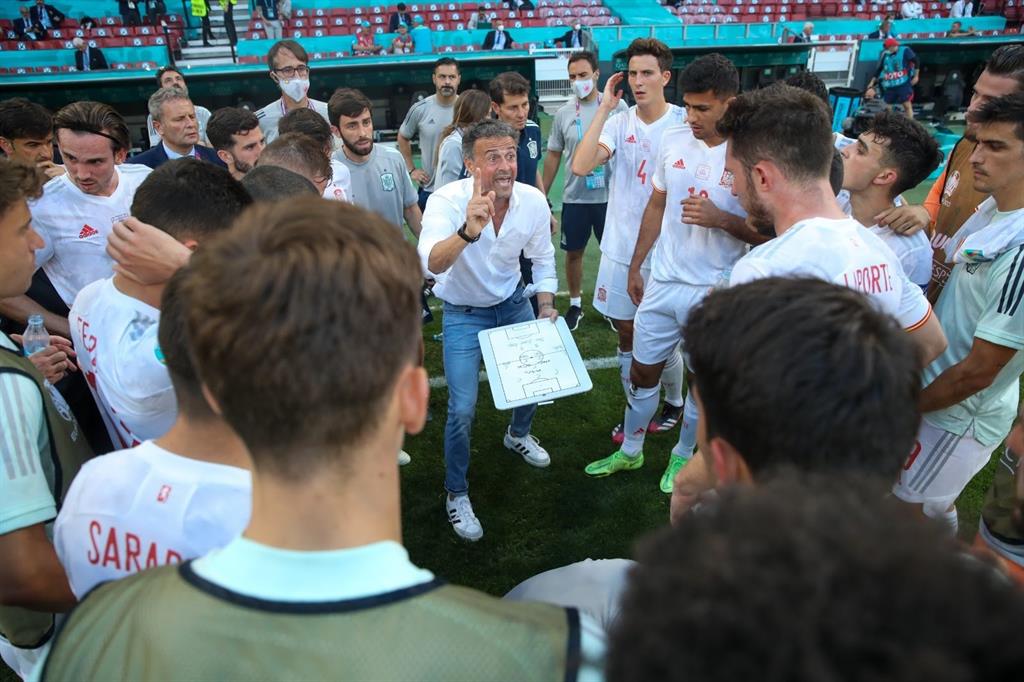 “I do not know a coach who does not admire Morata, we have to appreciate that he is Spanish”

The national coach admits that they must correct the mistakes that led to extra time: “My team defends with the ball”

The Spanish soccer coach, Luis Enrique Martínez, celebrated the classification of ‘la Roja’ for the quarterfinals of the Eurocup by beating Croatia (3-5) in Copenhagen in extra time, expressed his “admiration” for the forward Álvaro Morata and admitted that they should not make the mistakes of the last ten minutes again.

“We have carried the weight of the game and they have not generated us anything until we conceded the goal. We have redone, we tied and, from there, we saw that we continued to generate actions. The crazy game from 80 and those ten minutes are a thing to correct. I put the headline for you: ‘Enjoy football’ “, he commented at a press conference.

Luis Enrique confessed that this madness in the final stretch, from 1-3 to a tie at 3, has been “excessive.” “I was almost swallowed by the ‘dragon’. If the end is like that I am prepared to face other quarters of the style. The end is so beautiful, but the strange thing is that a match like this offers you a second chance,” he said.

In this sense, the national coach pointed out that the only mistake was how they played those last ten minutes. “We shouldn’t have played to defend and abuse the long ball. I have not made a team to play like that. In overtime we do play the last minutes as my teams have to do, which is to defend with the ball,” he explained.

Regarding the remarkable game of forward Álvaro Morata, he defended that it is a speech that he has been repeating in recent months. “We are not a team that depends on a player to score goals. I do not know a coach who does not admire Morata, who is a player who dominates the aerial game, has a goal, physical power … We have to appreciate a lot what he means have him in the national team and make him Spanish “, he was proud.

“SIMÓN? FOOTBALL IS A GAME OF MISTAKES”

Croatia risked a lot, according to him, in the final minutes and staked everything “on a coin”. “We had to have made the field large, to prevent the rival from catching the ball. It is normal in a team in which many players do not reach ten caps. It has been a wonderful lesson because it has rewarded us with victory,” he insisted.

Likewise, Luis Enrique downplayed Unai Simón’s mistake in the first goal and praised his personality in the rest of the match. “Football is a game of mistakes. I have not seen any player in my career who does not make mistakes. Unai has taught a lesson for any child who wants to be a footballer. Today he has shown that, after a mistake, he has generated again superiority, incredible saves and he has had the necessary personality. He has been a reinforcement for anyone who wants to be a professional footballer, “he stressed.

Likewise, he justified his celebration by passing to the quarters. “I am part of a group of 24 players and thirty-odd staff who are a family. Things have happened to us and we have been able to solve them. When the word ego disappears and the team appears, it is wonderful,” he said.

Finally, he assured not having preferences over the rival in the quarterfinals. “France is the world champion, and we know Switzerland well because we face each other in qualifying for the League of Nations. We are not to choose,” said the Asturian coach.