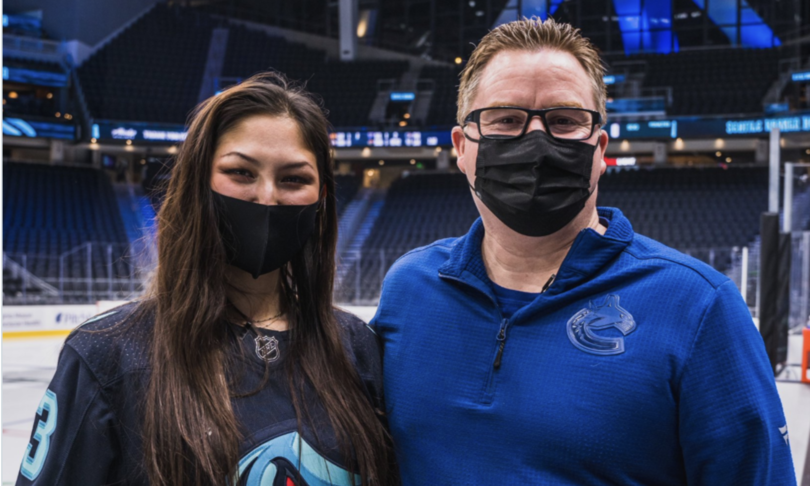 Two teams from the American National Hockey League have funded a $ 10,000 scholarship for the fan who ‘saved’ a Vancouver Canucks assistant, warning him that a spot on her neck could be melanoma.

Nadia Popovici, the name of the 22-year-old Seattle medical student, was watching the game between the Kranen home team and the Canucks on October 23 when she spotted the suspicious stain of Brian “Red” Hamilton, a materials officer at Canadian deductible. Not knowing if she was aware of it, he tapped on the separating glass and showed him the message he had written on his cell phone to warn him.

Hamilton then followed the advice and had himself checked on his return to Vancouver, discovering that it was malignant melanoma, a type of skin cancer. The timeliness of the visit allowed the assistant to be operated on immediately and the biopsy later confirmed that the tumor could be fatal.

“The reason for the letter (today) was that I really wanted her to know her persistence and everything she did to get my attention, she saved my life.” -Brian (Red) Hamilton pic.twitter.com/XQO2ZsEAtA

In view of a new match in Seattle between the Kranen and Vancouver, on New Year’s Eve, the Canucks had launched an appeal on social networks to find the Red Cross fan. Brian Hamilton, who has thousands of NHL games behind him, said he was amazed at the young woman’s ability to notice that spot considering that it was not big and he was wearing a jacket and also had radio wires partially covering his neck.

Just tracked down on her way back from a volunteer shift at an anti-suicide hotline on New Year’s Eve, Nadia was invited to meet Hamilton who, before the game, was able to thank her with a hug for having “changed the life” of him and his family..

The 22-year-old said she worked alongside in hospitals and also in cancer wards and that at the October match, the first ice hockey she attended, she immediately thought that the spot looked like a typical case of malignant melanoma.

Kraken and Canucks are giving $10,000 to Nadia Popovici toward her medical school funding for what she did for Canucks trainer Brian “Red” Hamilton. #SeaKraken pic.twitter.com/nBi0tH0mVG

The public, who by now knew the story advertised online and in the media, gave the student an ovation at the announcement that Kranen and Canucks would give her a scholarship. For the record Vancouver then won 5-2 but the Canucks tweeted a photo of Nadia and Brian with the caption: “Biggest win tonight”.