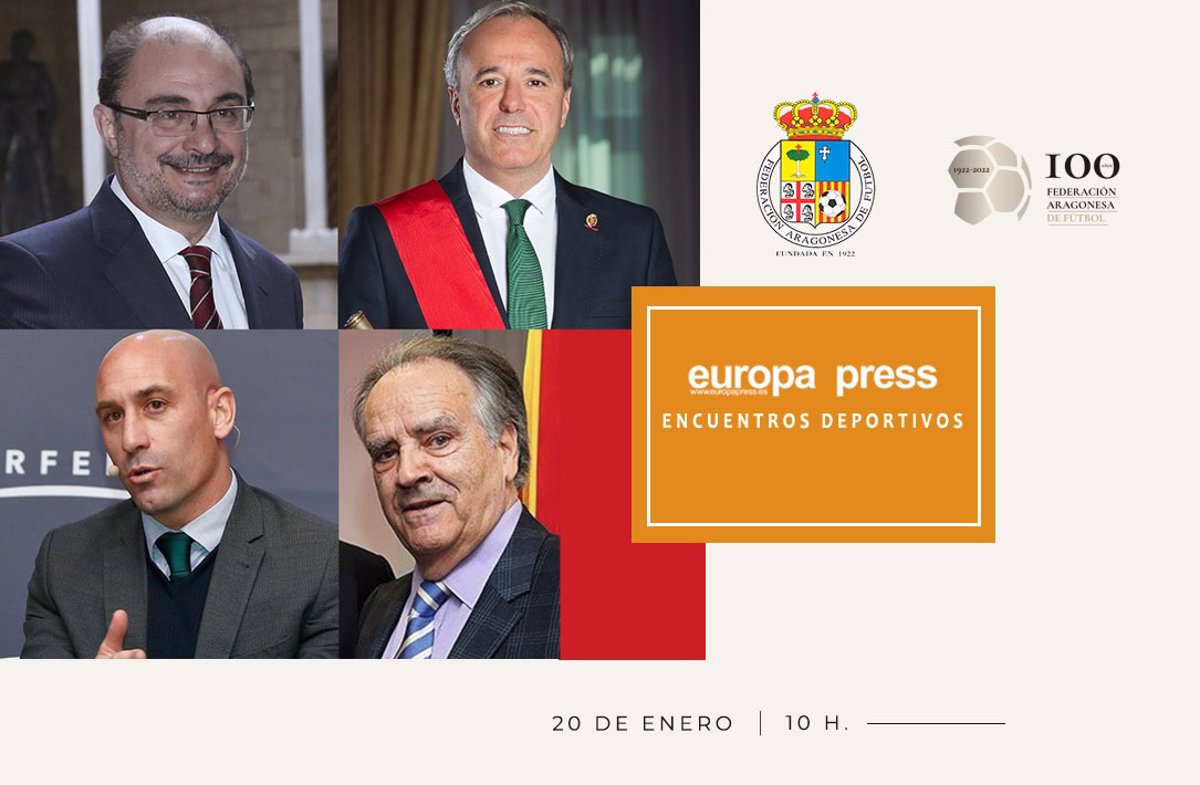 The president of Aragon, Javier Lambán, the mayor of Zaragoza, Jorge Azcón, and the presidents of the Royal Spanish Football Federation (RFEF), Luis Rubiales, and the Aragonese Football Federation (FAF), Oscar Fle, will be the protagonists this Thursday (10:00 a.m.) at the Europa Press Sports Meeting, which is being held at the Meeting Place Auditorium in Madrid, on the occasion of the FAF Centenary.

This meeting was to be held on December 14, but had to be postponed due to the situation caused by the extraordinary rise of the Ebro River due to heavy rains and which led the central government to approve the declaration of a catastrophic area requested by Aragon.

Under the title of ‘Aragonese Football Federation: One Hundred Years of Football’, Oscar Fle will reveal in this forum some of the milestones of the FAF Centenary, including the gala to be held on January 25 in Zaragoza.

The project for the new Romareda, the possibility of hosting a meeting of the Spanish soccer team and being one of the venues for the candidacy of Spain and Portugal for the 2030 World Soccer Championship will be, among others, some of the topics to be addressed.

During this century of life, the FAF has worked to develop and promote football in Aragon, and today it has become the most important non-profit social sports organization in this autonomous community.

In addition, Real Zaragoza is fighting to return to the elite of national football to which it has contributed with a list of winners that includes, among other titles, six King’s Cups, a Spanish Super Cup, a Fairs Cup and the 1995 Cup Winners’ Cup, with that unforgettable midfield goal by Nayim against Arsenal.

Aragón is also the land that saw the birth of international players such as Carlos Lapetra, José Luis Violeta, Paco Villarroya or Víctor Muñoz; coaches of the stature of Víctor Fernández; arbitrators case of Daudén Ibañéz; and the directors José Luis Costa and José Luis Roca, who were both presidents of the RFEF.

Aragonese football has also participated very actively in international competitions by hosting the only World Cup in Spain, in 1982, and as a sub-host of the Barcelona ’92 Olympic Games, in which the largest harvest of medals (22) for Spain was achieved till the date.

The president of the RFEF, Luis Rubiales, will take part in this match that has just arrived from the Spanish Super Cup in Saudi Arabia, where last week the first FC Barcelona-Real Madrid Clasico in history was played outside of Spain and in which the team Blanco won the title after beating Athletic Club (0-2) in the final.